I recently got an email from Changle Foreign Language School, one of the schools I worked in while I was in China. They asked me if I could record a video of myself saying something to them to celebrate their 5th anniversary. So I did a quick and improvised video and sent it to them. It’s kind of silly, but either way you can watch that video below.

That email and video is a good excuse to share with you something about my experience there. It was a great school and I will never forget it. It was my first experience teaching in China. The size and facilities allowed me to interact with so many students. They also had the budget and sources for many well organized activities.

What did I do in Changle Foreign Language School? 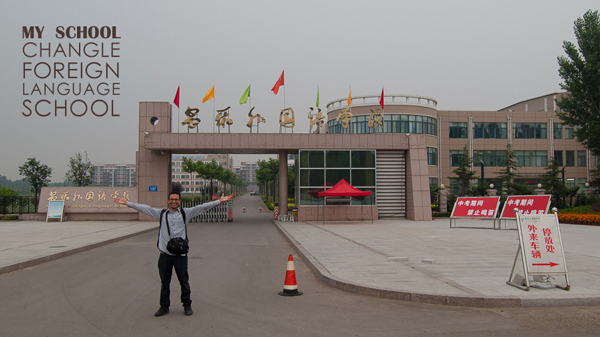 In case you didn’t know about my time teaching in China, I worked there for as an English teacher for two years. I taught middle school students in Changle Foreign Language School. If I had to summarize my experience in that school, it would be found in the list below:

Students were humble and respectful.

Teaching in areas less westernized was such an experience. Students show a big deal of respect for their teachers. I appreciated that most of my students were very receptive and kind. 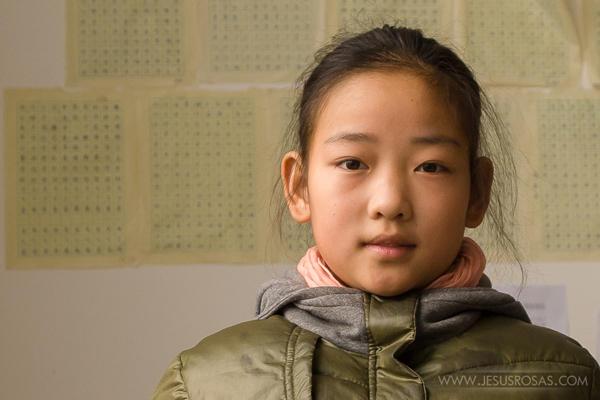 Every time I wanted to take a picture with my students, you wouldn’t believe how excited they would be. 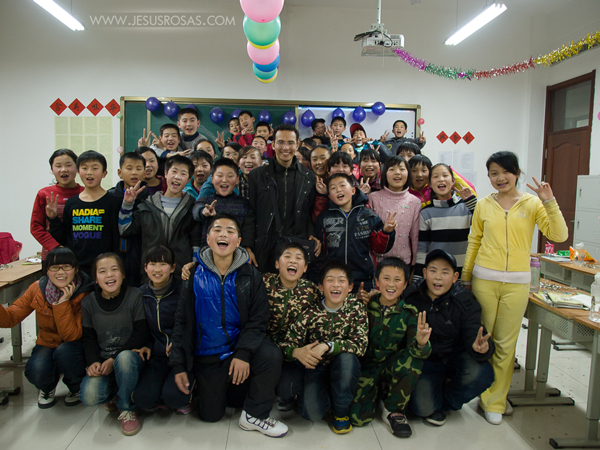 I was received with an applause

When entering to the classroom, more than once, I was received with applause and big smiles. I had never seen that before. Probably other teachers told them to do that, not sure, but still; it was incredible and I couldn’t avoid showing a big nervous smile each time that happened.

Although there was a language barrier, local teachers, staff and leaders of the school were really good towards me. I also made a great friendship with some of the other foreign teachers. 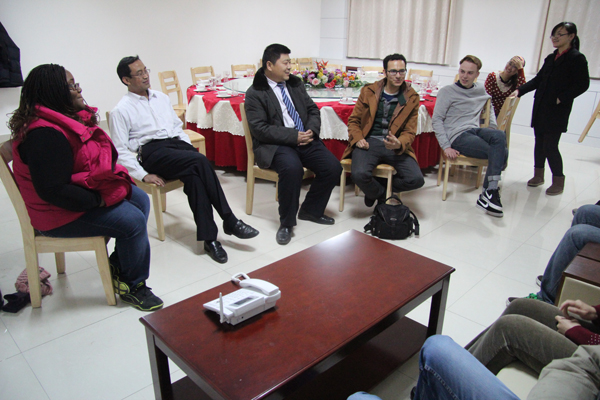 This picture is courtesy of Changle Foreign Language School. It wasn’t taken with my camera.

I made new friends in the school. Aside the foreign teachers, I was able to make new friends with certain students and students’ parents despite the language barrier. They all were more than great and I hope to see them again in a not so distant time.

The school was big. There were at least two five-story buildings just with classrooms. And a more buildings for housing, offices and other purposes. There was also an outdoor track and field stadium, a gym, basketball courts, parking lots, a nice landscaping area with a gazebo and a pond, and more. It has been the largest elementary and middle school I’ve been to. 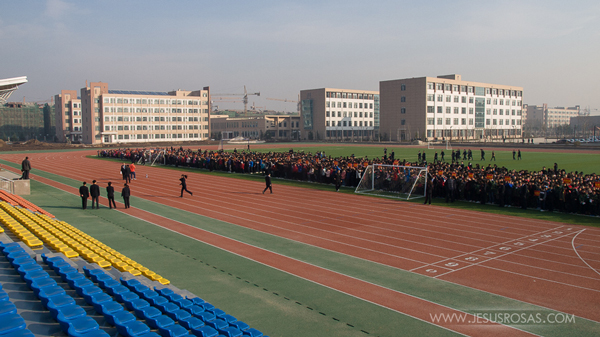 Students from Junior High got the privilege to travel from Changle to the coastal city of Qingdao. I was able to go with some of them.

My living conditions at the school varied. At first I stayed in a room at the school and I was very comfortable, but then I was moved to an apartment, it was okay, but I really liked when I lived in the school because I was able to go to my room every time I wanted to 🙂 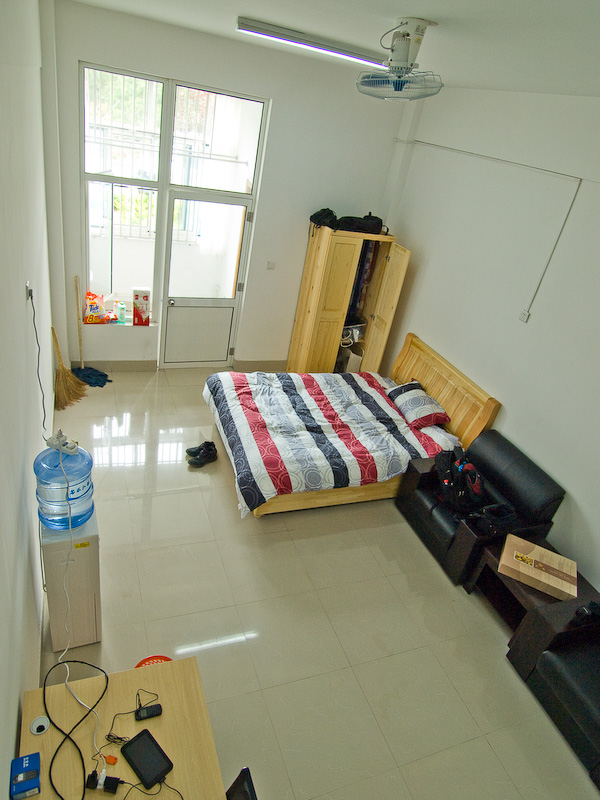 My room at the school

Eating in the school’s cafeteria was an unnerving experience. The food was a tremendous shock. Very different, nothing close to the Chinese food you get in Mexico or the US. No shop suey at all. Plus not always visually appealing, but with time, I was able to identify those dishes that I was more comfortable eating. And then I found some amazing and delicious dishes, although not in the school’s cafeteria. 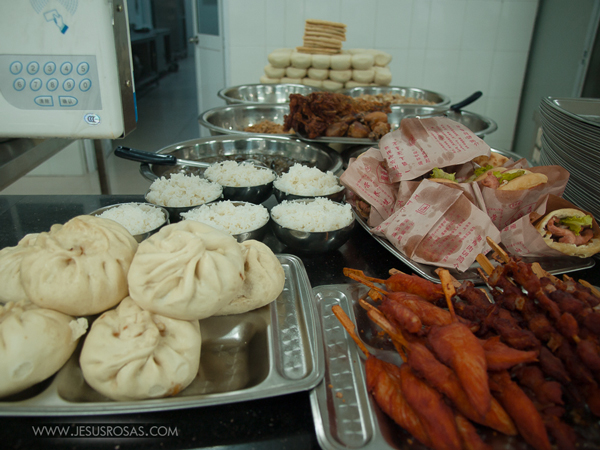 Some meal options at the school’s cafeteria

On the other extreme, from the cafeteria experience, I was invited frequently for several special meals with the school leaders and other foreign teachers. Some of these meals were extravagant and a few of those dishes were so good. 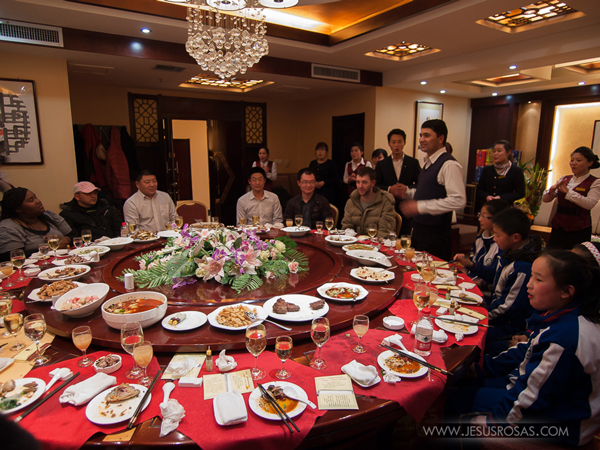 Chinese culture seems to be really into giving gifts. Each month, teachers who had birthdays during that month would get each one of them a cake. I got mine in December 🙂 Also during certain holidays the school gave me a few gifts. There were some gifts very uncommon to receive though, such as an about 35 x 25 x 15 cm (13.7 x 9.8 x 5.9 inches) box full of eggs. How many? No idea, maybe something between 5 to 7 kilograms (11 to 15.4 pounds ) of eggs just for me. 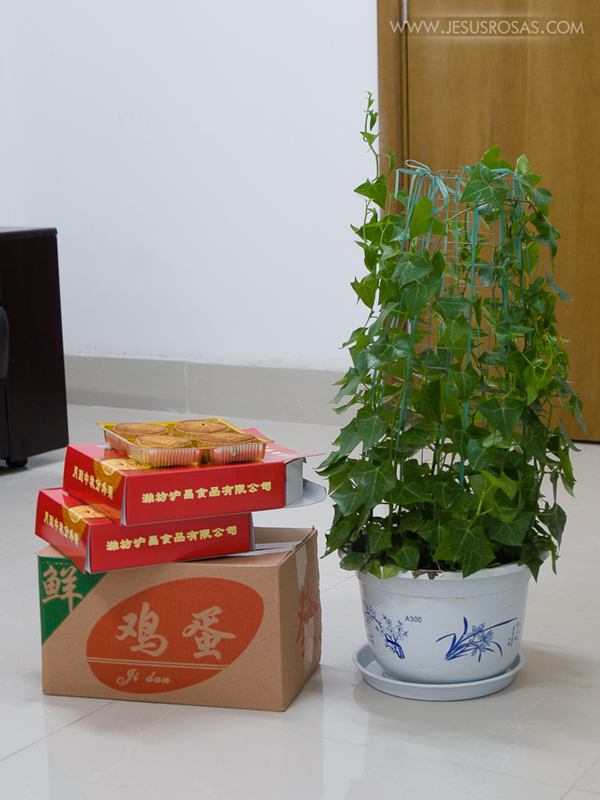 Gifts I received from the school. A plant, eggs, and mooncakes. The bigger box had lots of eggs, the two smaller ones had the mooncakes.

The walks and hikes

We had a couple of walking trips outside the school. Students were walking in long lines carrying flags, singing, or reciting phrases. I remember going to a park, museums, a factory and to some hills around. 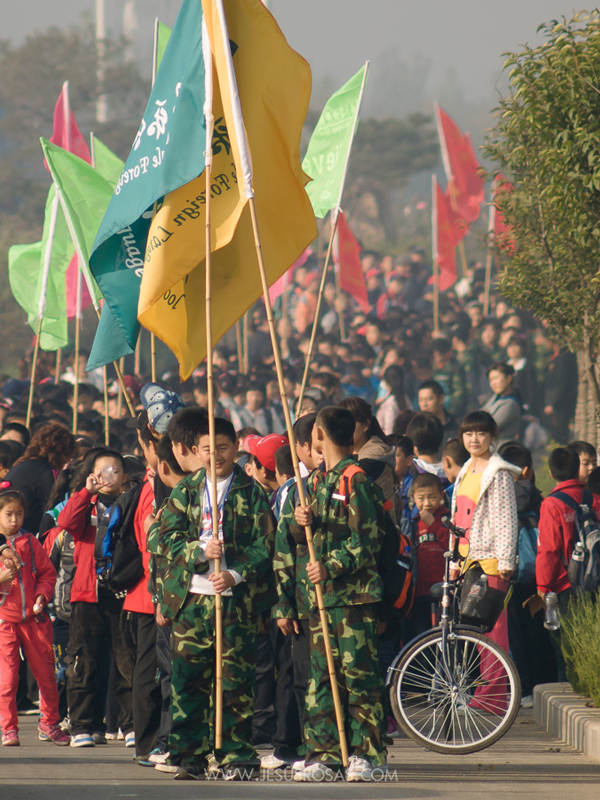 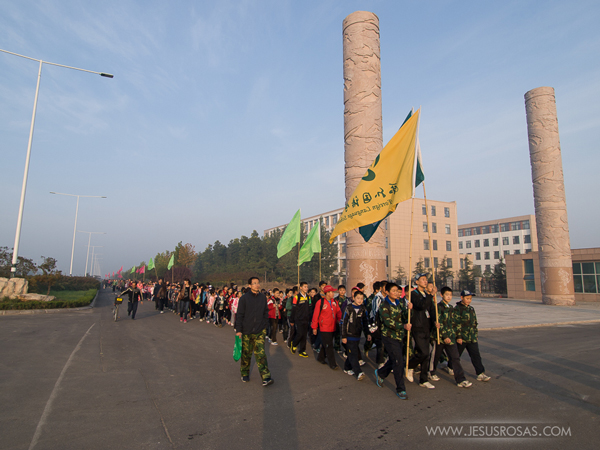 China doesn’t celebrate Halloween, but some are being exposed to the holiday, in part, thanks to many foreign teachers in all the country. Some of the foreign teachers organized this with games, music and decorations. 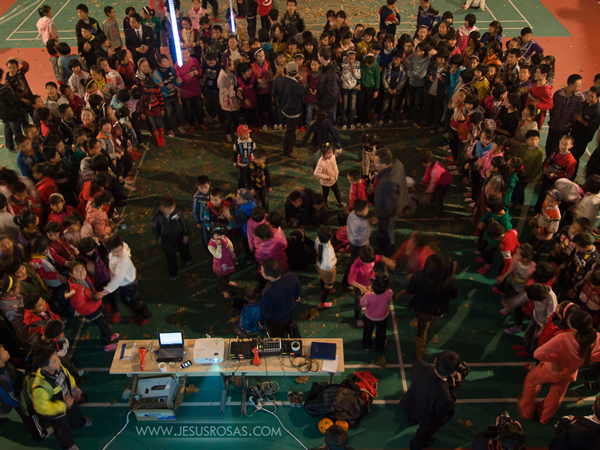 In Mexico, we don’t celebrate Thanksgiving day, it’s mostly US and Canada, but the school decided to give a surprise to all foreign teachers. That day, most of our students gave us handmade Thanksgiving cards and letters. I took pictures of some of them holding their cards. 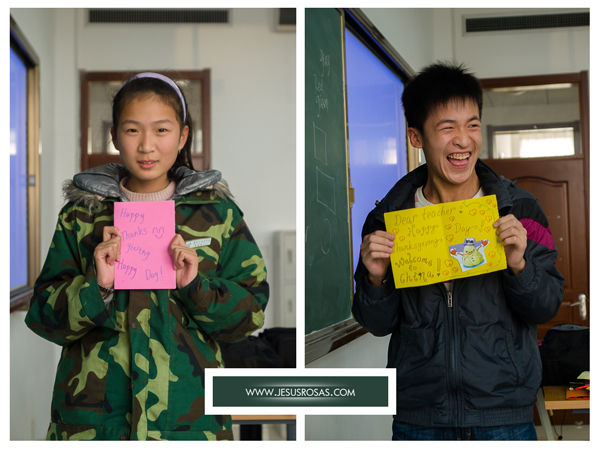 Christmas is not celebrated in China either. But marketing is gradually starting to change it in the bigger cities. Although it is leaving aside the religious elements and encouraging everyone to buy. At school we had a Christmas choir, which I was able to direct and conduct. We sang “Joy to the World”. There were also other activities and performances organized by the school.

Talking about our countries

All foreign teachers were invited to give a one-hour presentation in front of all the school about our own countries. Each day was a different teacher. I prepared one with lots of pictures and I even did a brief cumbia dancing in front of everyone. I know Cumbia is not native of Mexico, but that’s one of the most common things you would do in social dances in Mexico. 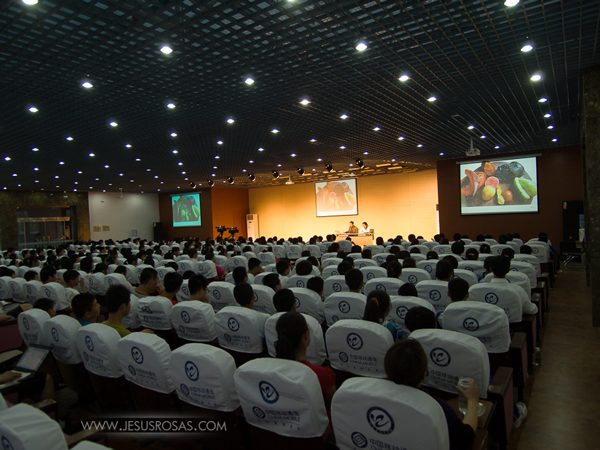 The presentation was made in an auditorium of the school and it was also broadcast live all around campus.

The Art Festival has been by far one of the most impressive activities I’ve seen in any other elementary or middle school. I would rather call it a performing arts festival. Students’ outfits were so colorful and magnificent, the music was incredible, and when you see hundreds of students and teachers performing and thousands of people in the audience together, you realize that you are not witnessing something common. 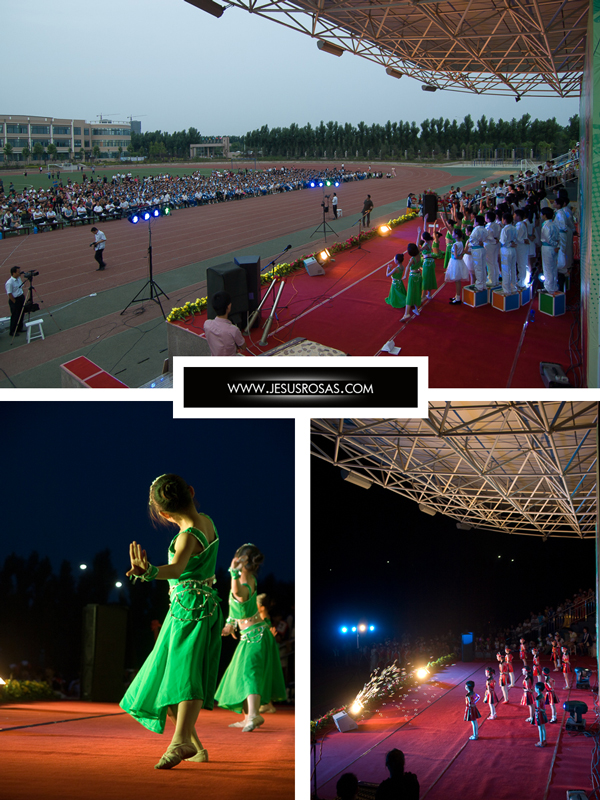 The sports festival was a two-day itinerary full of sport activities, students and teachers participated in activities such as running, football (soccer) matches, table tennis, badminton, and more. We, the foreign teachers, participated in a team-running or relay race against other local teachers. So I ran, but our team was the last one. Our last team member quit running when he saw that he wasn’t going to win the first place. Just because he was our friend and we liked him, we didn’t execute him. 😀 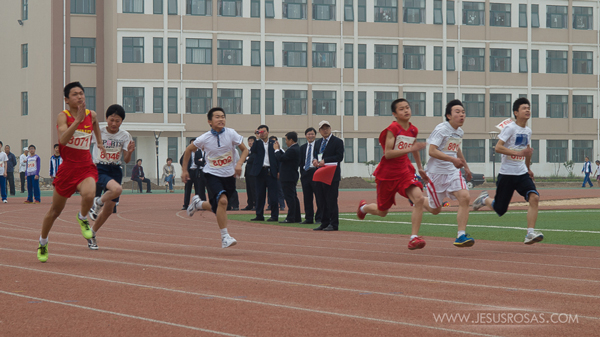 Some of the students running

I had the honor and privilege of having more than one hundred of my pictures mounted in a permanent photography exhibition at the school. I was invited to give a speech at the inauguration and a local politician was also among the distinguished guests.

Inaugural speech for my photography exhibition

And there you go, a summary of my experiences in Changle Foreign Language School. Is there anything you may want to ask? Please post your question here.

Oh, and you may want to enter your email address here if you want to know when I’m posting something again.

And finally, here are other posts you may be interested in reading:

Tai’erzhuang, the Most Beautiful Water Town in China?

The Ideal life of a Chinese man

Until the next time!

Note: If you are in any of these pictures, or you are the parent of any of the students in the pictures and you wish the photo to be removed, please let me know. Thanks.