Glass floor over the Atlantic, retractable roof, and the largest minaret in the world, what is it?

Glass Floor Over the Atlantic, Retractable Roof, and the Largest Minaret in the World, What is it?

Yes, it is a mosque, but which one? It’s no other than the Hassan II Mosque in Casablanca, Morocco. It is just in northwest Africa. Kind of far for me, but I was able to do a layover to take pictures in Morocco in 2013. Today I’m sharing with you some of these pictures.

And just as a cultural note, a mosque is a religious worship place for Muslims. While many Christians go to a church, Muslims go to a mosque. Muslims pray in the mosque, but there are also sermons, recitations, and lessons. In many cases the mosques are also a community center for several activities such as festivals or simpler things like gatherings of two or more people. 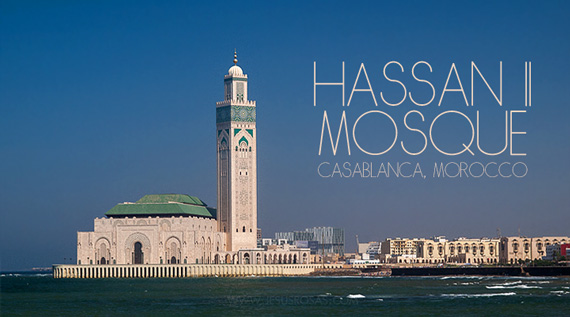 Where is the Hassan II Mosque? Check it out on the map below.

So what’s special about the Hassan II Mosque? Some interesting facts are that it is built on both, land and sea, it has a part where a glass floor is right above the ocean, and there is a retractable roof. This roof has a hydraulic system to open it and contemplate the stars on a clear night[1]. Its minaret (or Islamic tower) is the tallest in the world[2] and it is equipped with a laser beam that reaches 30 kilometers (18.6 miles) pointing towards Mecca. And Muslims pray facing towards Mecca, which they consider the center of the universe. And what else? Well, let me show it to you picture by picture. 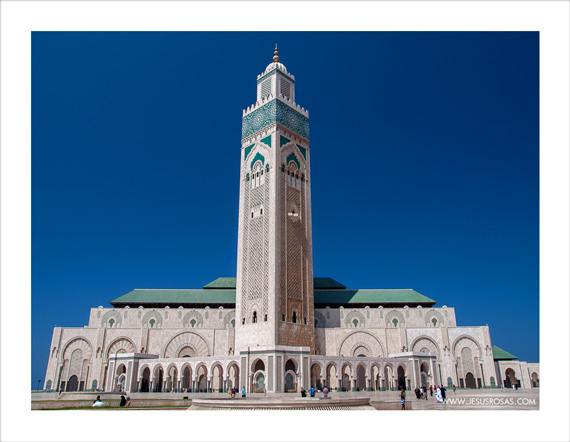 The Hassan II Mosque measures 200 meters long and 100 meters wide and was the work of a French architect named Michel Pinseau[1].

The Hassan II Mosque is one of the largest mosques in the world. Allegedly the famous Notre Dame Cathedral in Paris would fit in the prayer hall[3][4]. That is something I would like someone to explain it to me because I don’t have the exact interior measures of the mosque to verify it. Even so, it is big. And depending who you talk to, you will hear different statements. Thus, you can find those who will tell you that it is the second[1], third[5], sixth[6], or seventh[3] largest mosque in the world. The largest mosque is the al-Haram Mosque in Mecca. 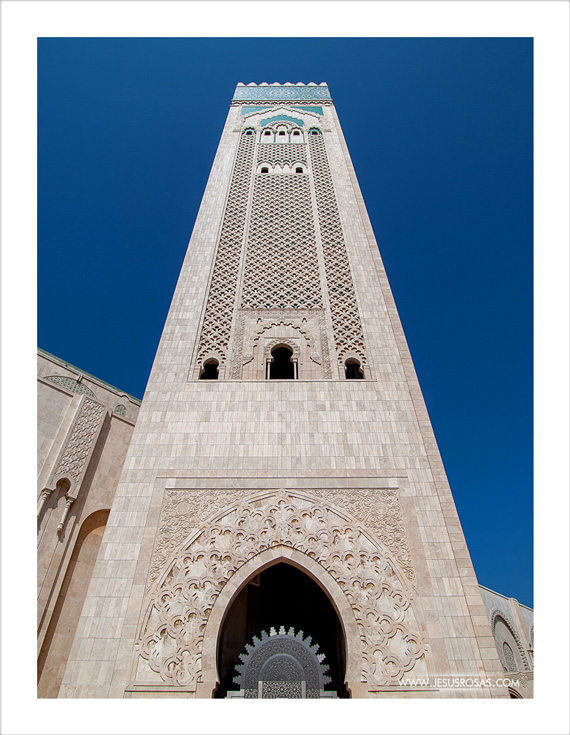 This is the mosque’s minaret. It holds the Guinness record for the tallest minaret in the world, measuring 200 m (656 ft)[2]. 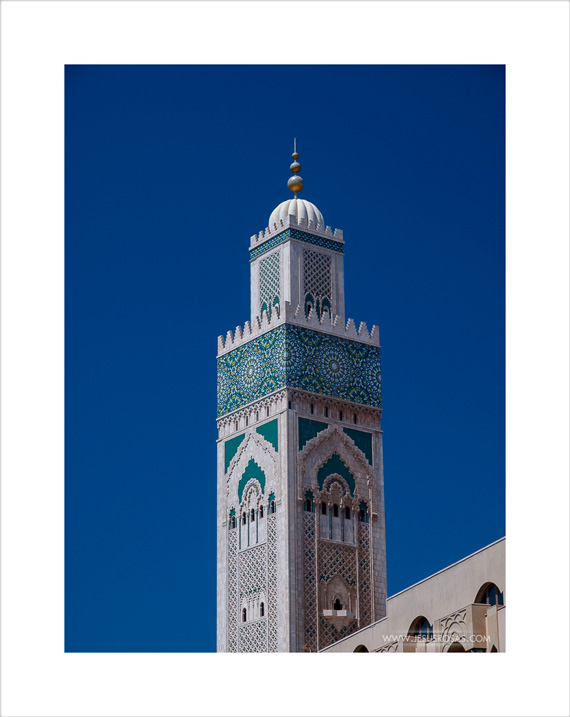 Look at this beautiful top half of the four-side minaret. 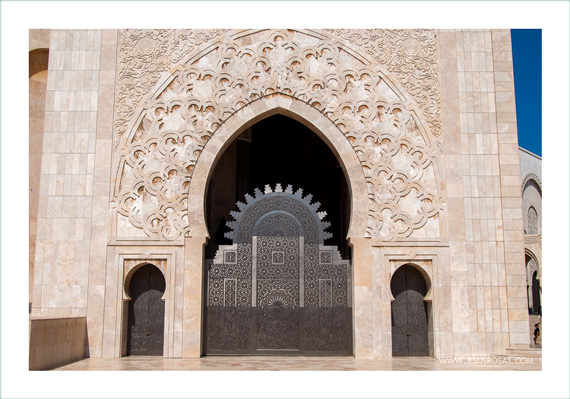 Located at the bottom of the minaret on each of two sides, I found a large pointed horseshoe or Moorish arch between two other small horseshoe-arch doors functioning as a major gate to enter the mosque. Apparently these are titanium doors[7], I haven’t found any official information. Some people talk about steel and bronze doors too, but they may as well be other doors inside the mosque. 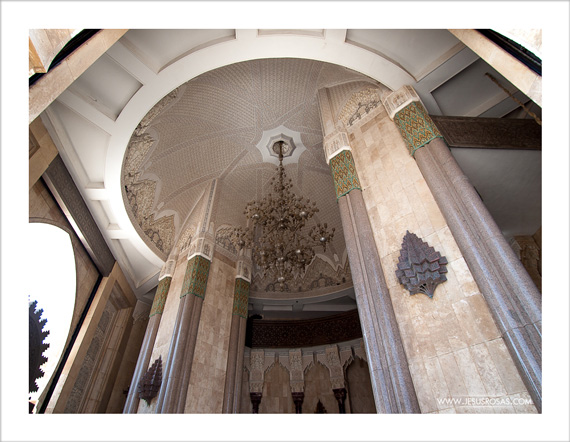 The entrance to the mosque for non-Muslims is limited to certain hours and certain areas with the company of an authorized guide. Non-Muslim visitors must buy a ticket. I can’t remember exactly the reason why, but I wasn’t able to enter at that moment. So I was only allowed to enter into the area under the minaret (see picture) and also to use the restroom where all Muslims also have their ablutions or washings before their prayers. I wasn’t able to see the large pool either. There is one I saw in pictures.

Non-official sources say that there are 56 glass chandeliers imported from Murano (small islands 1.5 kilometers or 0.9 miles north of Venice, Italy[8]. 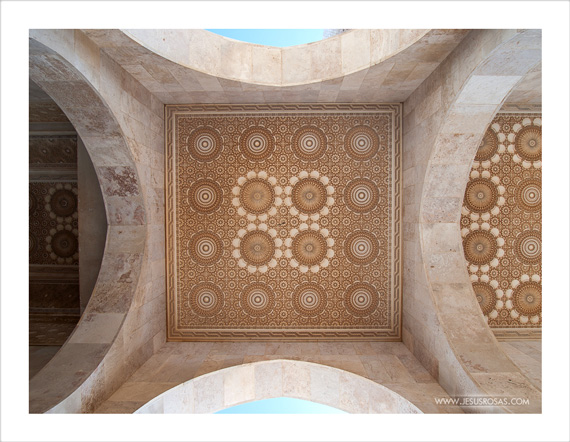 Even the ceilings of each structure I saw had something interesting to look at as these geometric patterns. 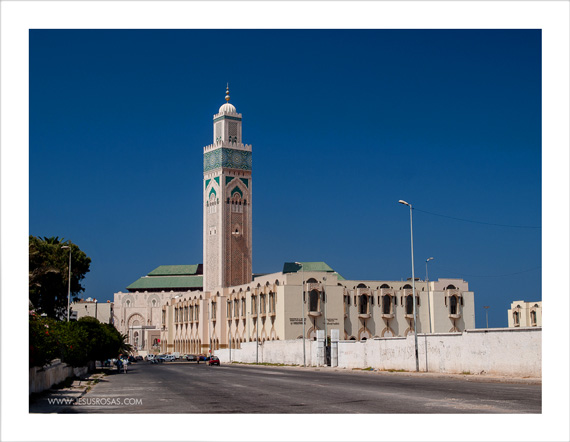 This was the first view I got of the mosque. I was walking on Asny street a few meters from the Moulay Youssef Hospital. 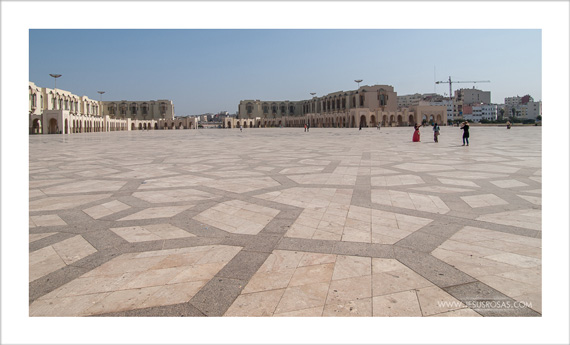 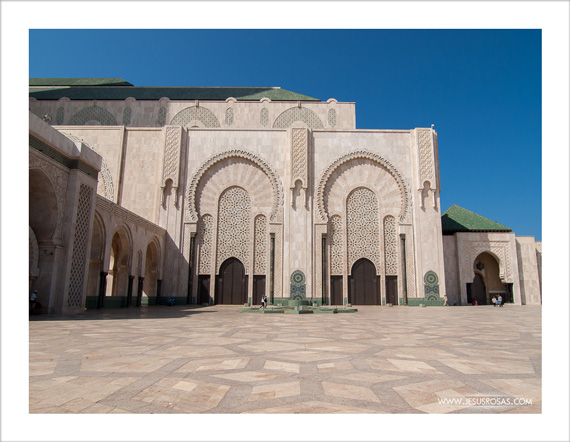 Part of the exterior is covered with granite and marble[9]. Look at the designs and engravings of the mosque. It was a monumental and expensive work. There were thousands of workers involved in this project. Some say there were more than 6,000 craftsmen [4][10] , others even talk about 35,000 workers and craftsmen[3][8]. I haven’t seen anything official yet. And the funds? Thanks to public donations, especially from Mohammed V foundation, which collects funds from businesses linked to the government[5]. But it looked like part of these contributions were forced and not voluntary. At the end, this collect helped reduce the inflation in Morocco at the time. Today Moroccans seem to be proud of their building [10]. It caught my attention that the building of such a monument affected an entire country. 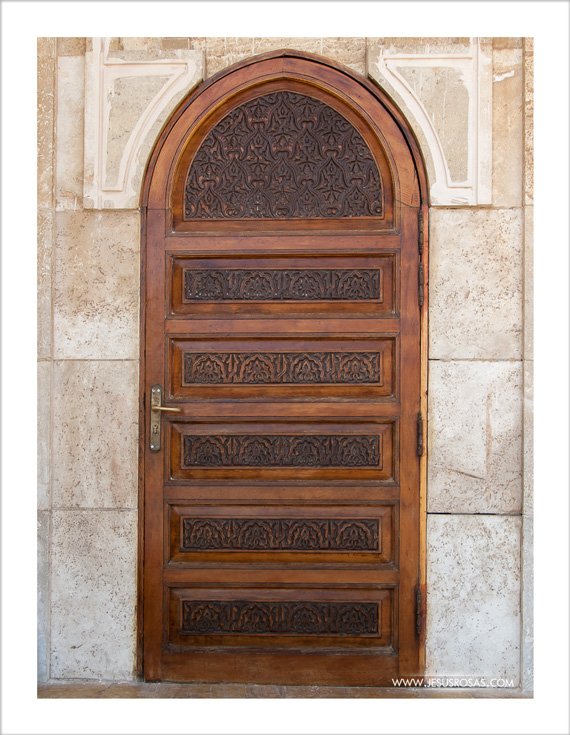 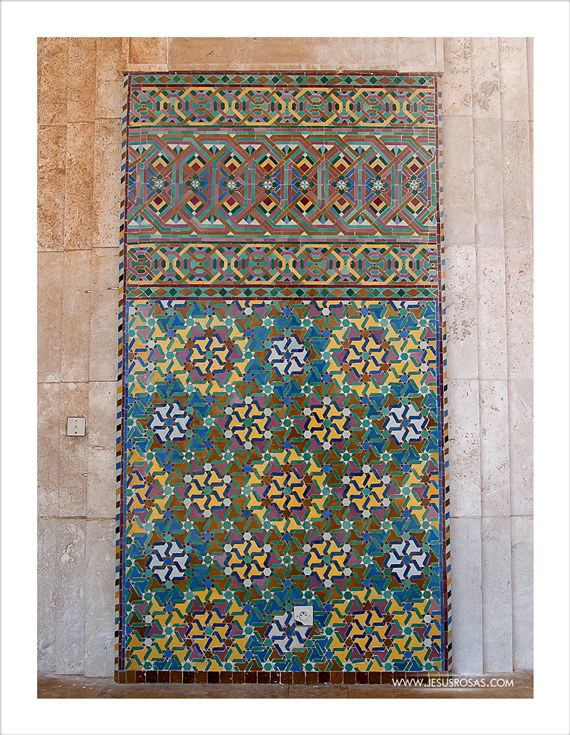 One of the most interesting features in Moroccan architecture is an Islamic type of art known as zellige or zellij. Zellige are pieces of colorful terracotta tilework used in mosaics and you can find it in many places in the Hassan II Mosque as it is shown on this exterior wall on the image above. Apparently the craftsmen of the Moroccan kingdom ended up covering more than one hectare (10,000 squared meters) with zellige forming 80 original design patterns. This is more than covering an entire FIFA football (soccer) field (7,140 squared meters) with tilework pieces of different shapes. Yes, it is like solving a giant jigsaw puzzle! 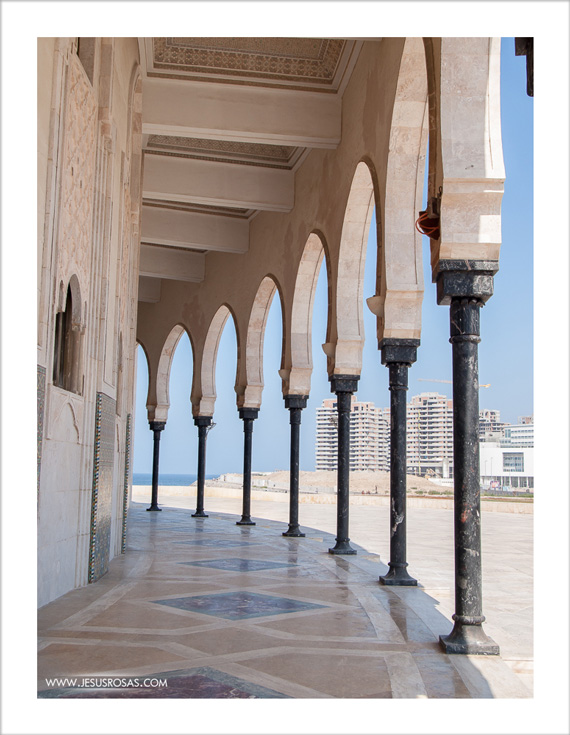 Arches around the mosque 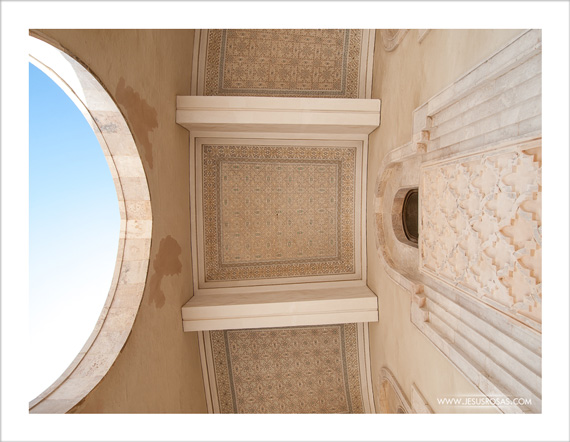 It is difficult to see it here, but the three sections of the ceiling you see on the picture above are covered with mosaics made with small pieces forming different ornamental patterns on each section. 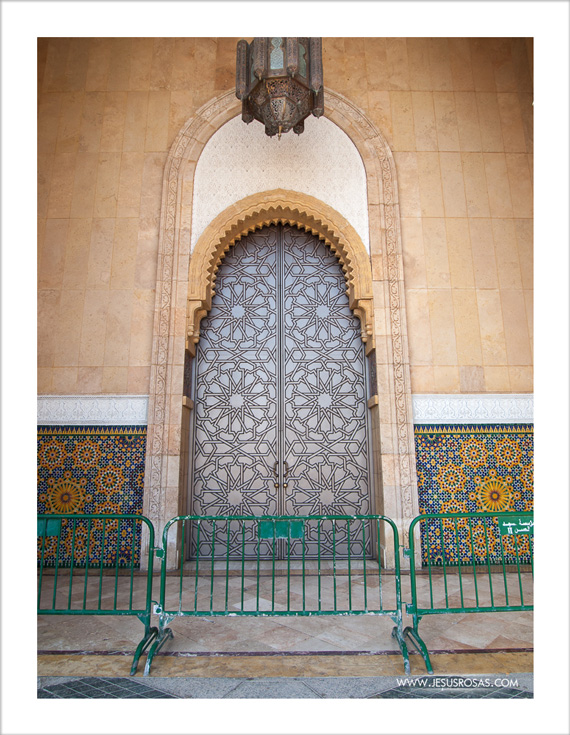 More titanium doors? Whatever material, bronze, steel or titanium, they are definitely beautiful. 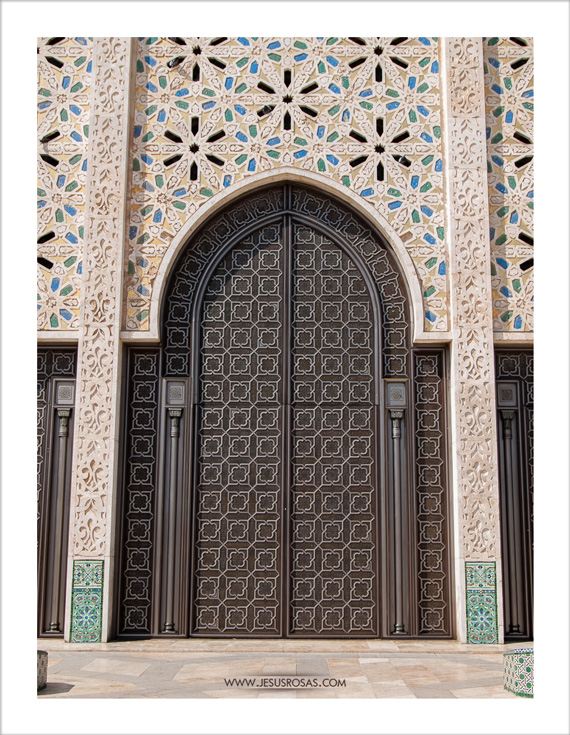 More doors and look at the mosaics on the walls. Even those small ones in emerald color on each column. 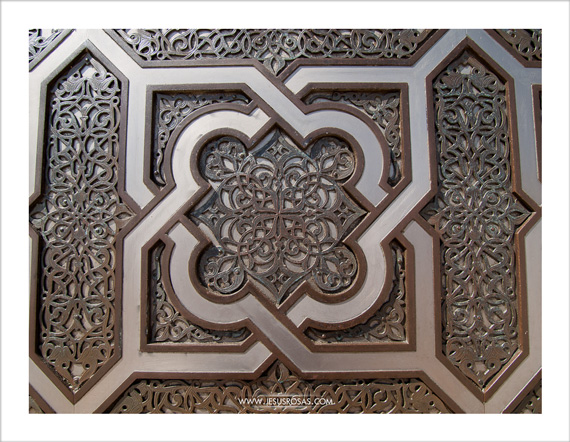 Details on the door show beautiful ornamental patterns within other shapes. 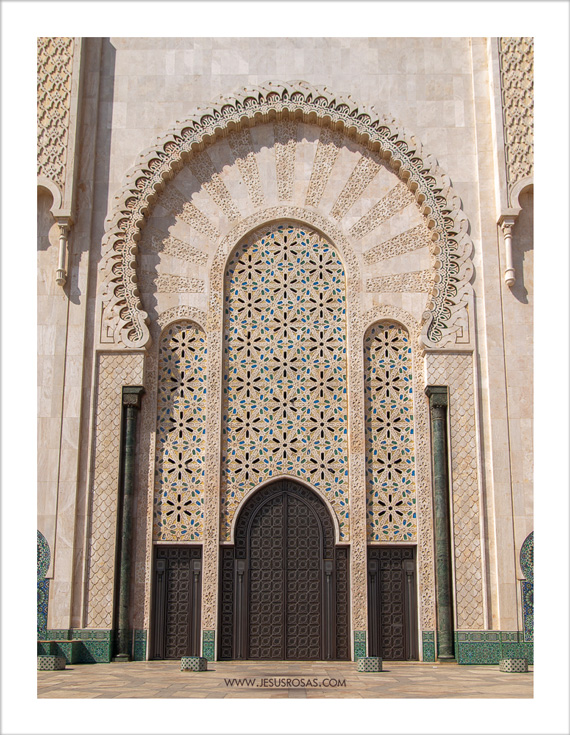 Now see it from a farther angle. Look at the arch, the shapes, the pillars, all fitting in exquisite harmony. 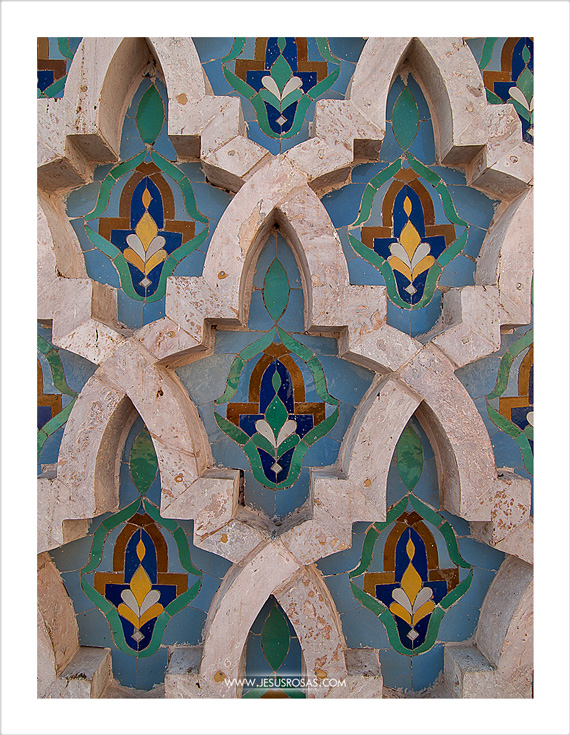 More zellige patterns. Here you can see that they look handmade, no machine did this. The zellige is not made with high tech machines in an assembling factory line. While some of the finishings could be improved, the zellige tiles keep the pattern.

In fact, if you would like to know more about this type of art, I’m sharing a 5m 26s YouTube  video here for you. There you will see Moroccan craftsmen making zellige tilework. Amazing. 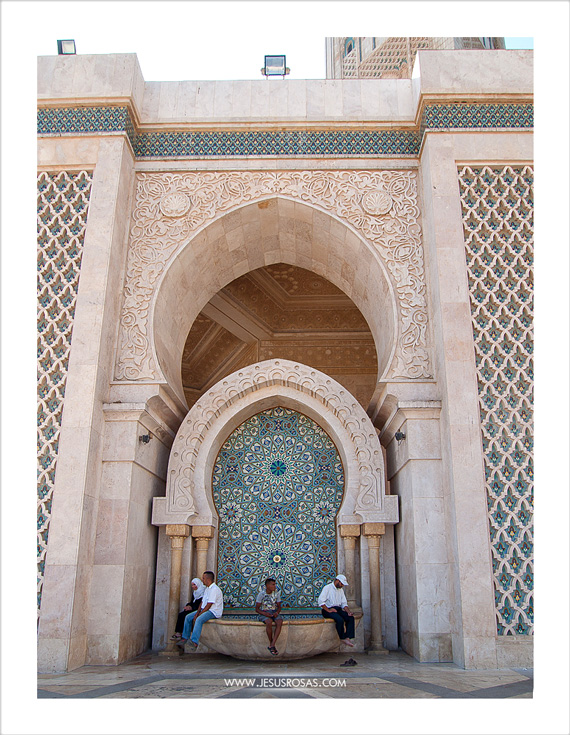 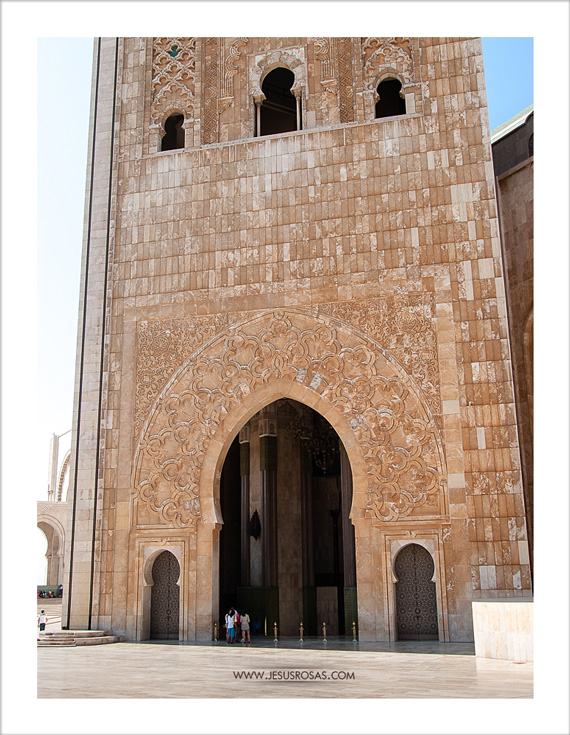 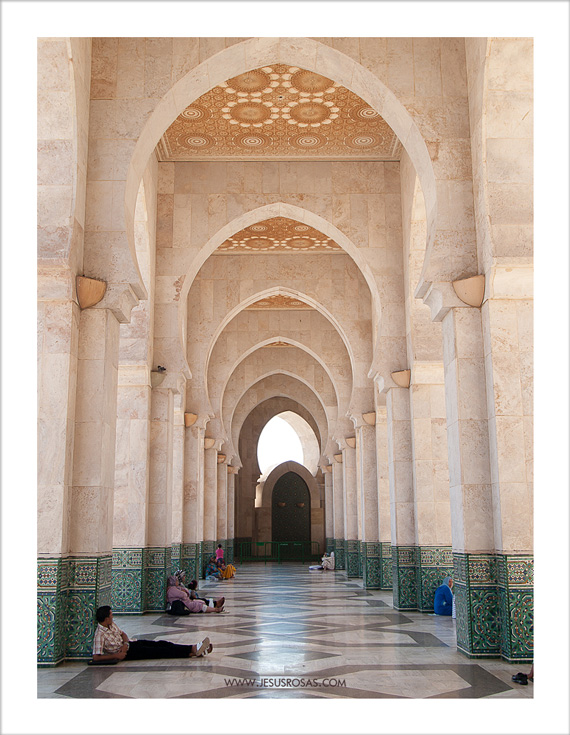 And of course, more arches and pillars with mosaics at the bottom of each column. Some enjoy a moment in the shade to rest. 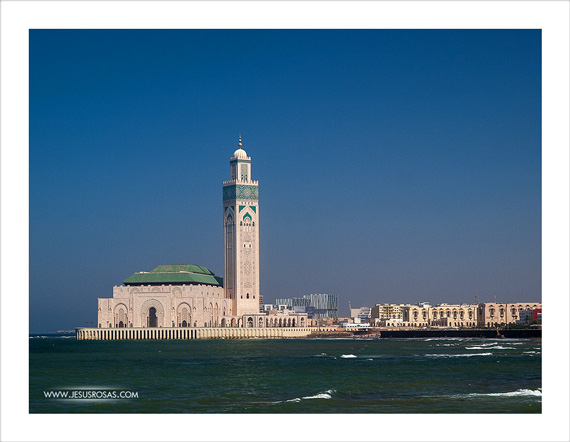 A very peculiar distinction of the Hassan II Mosque is the fact that it is built on both, land and sea. There is platform over the Atlantic Ocean and part of the mosque’s floor is made of glass so worshipers can kneel over the sea. Trendesign, a Jordanian magazine of architecture, design and decor says that the late King Hassan II had pictured this “because God’s throne is on water […] Therefore, the faithful who go there to pray, to praise the creator on firm soil, can contemplate God’s sky and ocean.”[3] However, it seems that the glass floor area is currently reserved mainly for royal use, so no other visitors can have access to it[10] And another interesting fact is that breakwaters were built somewhere to protect the mosque since waves can reach up to 10 meters[3]. 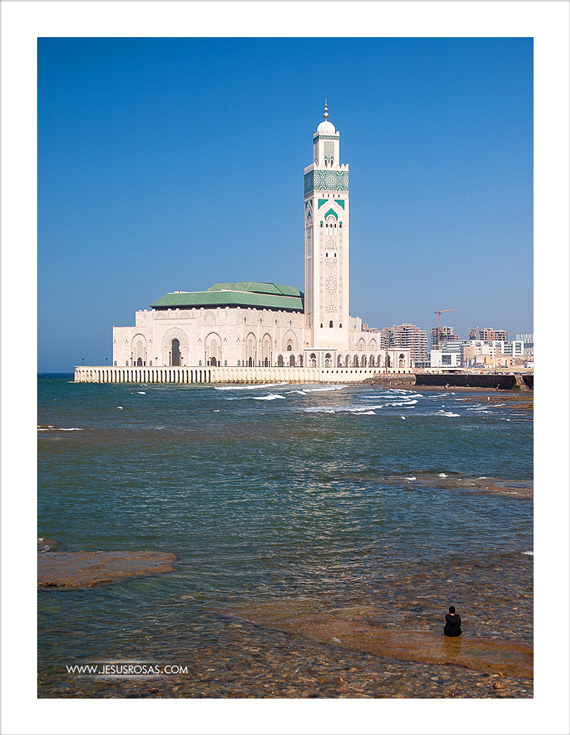 A woman admiring the mosque from the water. 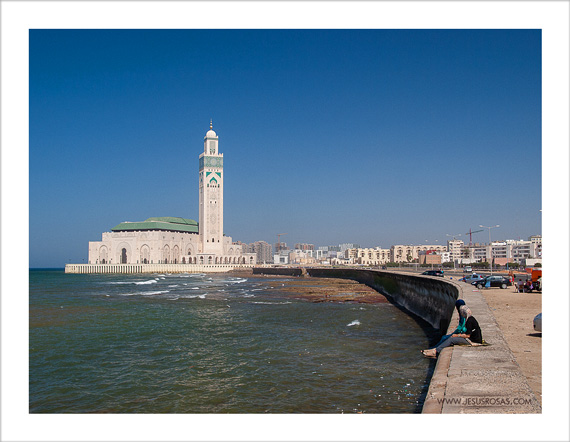 From the sidewalk along the bay you can see the mosque. 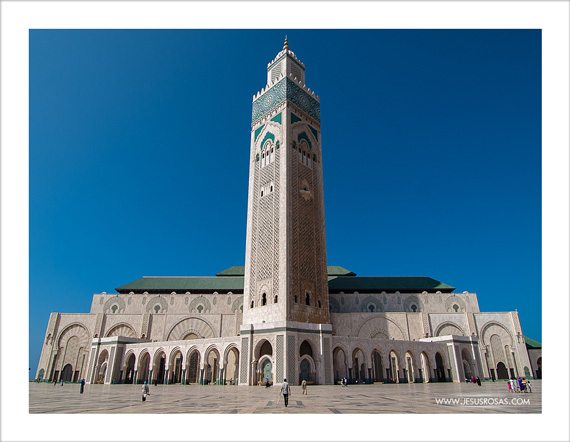 Nowadays the Hassan II Mosque is part of the Moroccan national pride. Its construction took seven years beginning in 1986 and ending in 1993[1][3].

And this is how it ends this tour. What do you think? Is there anything that has caught your attention? I invite you to see another architectonic jewel, the Roman Colosseum. It was precisely a week before traveling to Casablanca when I was in Rome taking pictures of this amphitheater. 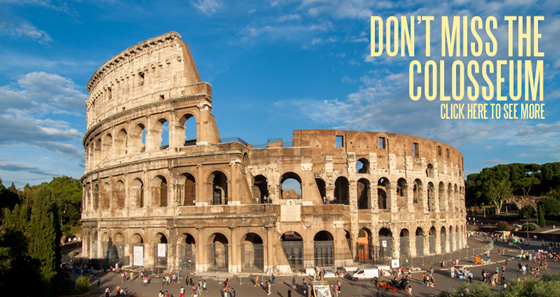 If you would like to see my next posts subscribe to the blog so you can get an automatic email the next time I have something new. Have a great day!