I Wanted to Crawl into a Hole

I Wanted to Crawl into a Hole!

I’ve had many embarrassing moments in my life. Two weeks ago something happened that reminded me of one of the worst. Some years ago, I was a missionary for The Church of Jesus Christ of Latter-day Saints. At that time I was in Cuautepec, Mexico City. I received a phone call. I was asked to bring the missionaries I had under my leadership to a special meeting. We were asked to sing the hymn Called to Serve. The meeting was in what it used to be the Benemérito de las Américas, a LDS High School. A few minutes later, about twenty missionaries arrived at the place. The meeting was for young men who were planning to serve a mission. There were bishops, stake presidents (responsible leaders who oversee several congregations), and one or two area authorities.

Being a former student of the school myself, I couldn’t help feeling a mix of joy and nostalgia. It was my dear school! I walked with my missionaries looking at the beautiful green areas, the dining hall I used to visit three times a day, some classrooms, and I remembered former teachers, classmates, closest friends and some significant people during my teenage years.

Once we arrived to the exact point we were asked to be, someone gave us some instructions: “Elders (missionaries), thank you for coming. The meeting is being held inside. When I give you a sign, I’ll open the doors and you all will be entering in one single line and sing Called to Serve. Please do it with enthusiasm. And while you are singing and walking, you will go to the front of the audience. Once you finish singing, you will go back to your areas to continue working. You will only be in the meeting for the hymn. Do you have any questions?”

“No”, we replied. Everything was pretty clear. We waited outside the building. While waiting I wished I could walk around my old school. I looked around to see if I could recognize someone. And there it was, what a pleasant surprise seeing Manuel Othón, one of my former teachers a few meters away from me. He was the director of the orchestra. I used to play the violin when I was there, I can’t do it anymore.

I took one of the missionaries with me and walked towards my former teacher who also recognized me. With his always cheerful attitude and big smile he greeted me, “Hey, what’s up mate? How have you been?” He quickly realized I was a missionary. For a few minutes we talked eagerly about what we had done recently, about former classmates and teachers, and then we were interrupted by a missionary: “Elder Rosas, we are going in!” 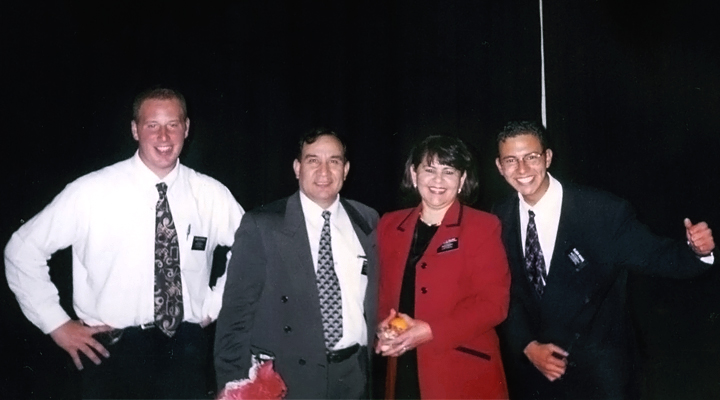 This picture was taken around the months I had this embarrassing experience. From left to right: my companion Elder Peterson, President Arturo Galindo and his wife (he was one of my two mission presidents), and me.

I quickly said goodbye to my teacher and the other missionaries and I ran to the line of missionaries that was about to enter the meeting. I was the fourth or fifth in the line. The doors were opened and I could feel a solemn silence coming from inside. Far in the room, in front of the audience, there were several leaders quietly seated. On the right side of the isle we were walking on there was a multitude of young men between 17 and 19 years old. They all were wearing ties and white shirts. Many of them were looking at us with a certain degree of curiosity. All of them in silence.

According to the instructions we had received, at that moment we supposed to have been singing. The first two or three missionaries that entered seemed so shy to sing. “Why aren’t any of you singing?”, I asked myself. The missionary in front of me was from the US. He didn’t have much time in Mexico and he barely could speak some Spanish. I got a little frustrated because none of them were doing what we had been asked to do. Being their leader, I had to do something. So I whispered to missionary in front of me: “Elder. On the count of three, we have to start singing.” That way everyone will start singing too.

“One… two… three!” And with such power, volume, enthusiasm, and joy, I sang: “Called to serve Him, heav’nly King of glory.” It was on the third word when I realized that I was singing alone; I hoped that by the fifth word, everyone would be singing, but on the fourth word, it was evident to me that nobody would sing with me. And with such impetus, I decided to at least sing those eight words to end that line. Once concluded, smiled to the audience on my right and lifted my thumb up.

Hundreds of eyes had immediately been drawn to me. One of the leaders left some of his papers, pulled down his reading glasses and lifted his head craning his neck as much as it was humanly possible to see where the unexpected voice that broke the silence was coming from. It was almost instantly that I noticed several chuckles then whispers among the audience and a few fingers pointing towards me. Besides that, other leaders leaned among themselves to whisper.

The silence came back. We continued walking in the line towards the pulpit and where all the leaders were. The funeral silence was piercing. It was slightly interrupted by the reverent movement of the missionaries that walked. I could hear my heart beat. I saw heads following me in a synchronized way. I kept smiling. I told myself: “Keep smiling, hold on, look at everyone on the eye and show self-confidence”, but I still could hear my heart beating at a fast pace. My forehead was all sweaty and my ears hot. More eyes everywhere, more silence.

An old man stood up and walked slowly making soft noises with his shoes. He reached the piano. A scrapping sound from the piano bench is heard and finally the silence is totally broken with the melodic introduction of the hymn Called to Serve. The introduction seemed to be the extended and reloaded version of the hymn because it felt like an eternity standing in front of the audience. I just wanted to sing and then immediately disappear forever.

Once the long notes of the introduction finished, we all missionaries sang. I sang with a forced smiled. I had lost track of what a natural smile was. I was forcing it due to my embarrassment. My facial muscles wanted a desperate rest. But I kept convincing myself to keep singing with my “dignified smile”, enthusiasm, and volume. We sang four long verses (The Spanish version has four verses. In English there are only two. Who in the world was the author of those two extra verses?!). “Onward, ever onward, as we glory in his name.”

My mouth was dry. I smiled as much as I could. I wouldn’t be surprised my gums and molars were all exposed. I would probably looked like the Joker. Finally the hymn was over. The solemn silence came back again.

We walked towards the exit while I heard a distant and reverent voice saying “thank you, elders.” “Hurry up!” I told everyone in my mind. I wished everyone would be able to hear my thoughts. I wanted to exit quickly. I wanted to disappear and be released from all those eyes. But since I was one of the first to enter, I would be one of the last to exit. Those faces kept looking at me. Some with a more relaxed smile and some others with friendly smiles. There was even one young man who was saying goodbye to me with his hand and a gesture of approval.

I kept walking trying to show a confident and smiley attitude. I looked at the open door in front of me that let a bright sunlight coming in. The line of missionaries was moving slow, very slow, especially near the door. I even had to stop for a second to wait for the missionaries in front of me to continue moving. One by one the missionaries were disappearing behind the door into the shining outdoor. Walk towards the light. Ah, the tunnel at the end. That would be my way of dying. I wanted to be swallowed up by that light and with it, I would have my rest and relief.

Finally I crossed the door. Once outside in plain light we were the same again. The noise of missionaries chatting, people outside, and the routine came back. The missionaries quickly spread out in pairs towards the school’s exit. I was still very confused. I asked someone, “Why nobody sang when we got in? Weren’t we suppose to have entered singing?” Then someone said, “no, elder. When you went to talk to your teacher someone else came to change the instructions. You saw we didn’t have time to explain it to you because we entered so quickly.”

Oh, how embarrassing! Definitely one of the most embarrassing moments of my life. As a matter of fact, I have many more, but I remembered this thanks to another “musical failure”. It was on Mothers’ Day (May 10, 2015). The bishop of my former ward (congregation) called me and invited me to sing during his sacrament meeting. It would be dedicated to the mothers of the ward. He asked me to sing O My Father (the lyrics talk about a heavenly mother). I invited two more people to sing with me, but with two days in advance, no music, and not much practice, I forgot my note and the hymn was a disaster during the presentation.

I ended the hymn sweating a lot. We sat at the far back of all the audience. I was embarrassed and I remembered similar experiences such as the one I just shared with you when I was a missionary.

If you want to see the lyrics or listen to any of the hymns I mentioned here, click on any of the options below.

And my lessons are, if you are a leader or organizer, plan things with time in advance to avoid changes at the last minute. If you receive instructions, don’t leave your post. If you leave, you may find things very different when you come back. Or in any case, get an update of any change, or just be prepared to sing alone 😉

So now you tell me. Have you ever had a similar experience? Or, what has been one of your most embarrassing stories or experiences? You can share it here in this blog so others can read it in the comments section. Scroll down. I would love to hear your story 🙂

You may want to read: The Day I Went Missing.