The Day I Went Missing

The Day I Went Missing

Children’s Day is celebrated on April 30 in Mexico. And if you are in Mexico, you will see parties, special offers, activities and many more things intended for children. Last Thursday wasn’t the exception. With this in mind, I would like to share with you an experience of my childhood. So here we go, The Day I Went Missing.

I was in Hermosillo, Sonora, Mexico. I was probably nine years old and I was in fourth grade. It was a day of school and, Aaron, one of my friends from school, invited me and other classmates to play video games at his home after classes. Definitely, yes! He didn’t have to tell me twice. Aaron, René, César, maybe David and two or three more classmates walked around 400 meters (almost a quarter of a mile) to Aaron’s house. 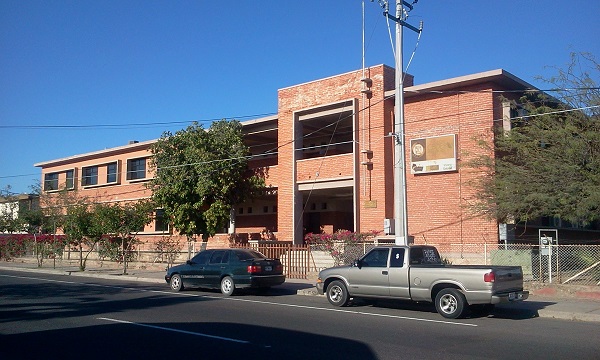 My former school in Hermosillo, Sonora, Mexico. It was named Rosario Paliza de Carpio No. 2. Today the building is used by the state government for nursery plants. Yes, I know, children have been substituted by plants. I guess they are easier to take care of them. Picture taken with my phone.

We arrived at a big house. The dinning room and living room were near the entrance. I saw two or three adult women doing some housework. We introduced ourselves and found out that one of the ladies was Aaron’s mother. I left my backpack in a corner of the house and then I was asked to wash my hands because we would have a meal before playing videogames. “Alright, alright, I’ll eat”, I said to myself. Who knows what I ate, the truth is that my eyes were constantly watching the living room were a big TV laid on a shelf and the videogame system laid on the floor next to many cartridges. Someone had to make sure the videogames didn’t move by themselves and hide somewhere, right?

At first Aaron’s mother asked everyone to call our respective parents to tell them where we were. In my case, I don’t remember the situation very well, I probably didn’t know any phone number. So I told Aaron’s mother that she didn’t have to get worried, that everything would be okay if I wasn’t able to get hold of my parents. After all, my mom was out of town at that moment and my dad was a very mature person. He wouldn’t get consternated if I arrived home a little later than the usual time. He being a journalist and an intelligent and experienced man and when seeing that I wouldn’t be at home at the usual hour, he would logically assume that I would be at one of my friends’ home enjoying serenely the important phase of my childhood. It would be pretty obvious, right? So I made the resolution of playing videogames right after eating.

Oh, how much fun I had! I ran at high speed, I destroyed aliens, I shot here and there, and, in summary, I enjoyed the wonderful virtual world my friend Aaron set up for everyone in his videogame console.

Everything was great, except that on several occasions a woman, maybe Aaron’s aunt or grandma, insisted that I should get hold of my parents or at least talk to a neighbor or other relative. She even suggested that I went to my house to tell someone and then come back and keep playing. She asked me if I had uncles, aunts, or cousins to call. Oh, so many insistences. I tried to appease her telling her that it would be for a few minutes more and there wouldn’t be a problem. Minutes went on and on. Two or three hours later, after so much persistence from this woman and Aaron’s mother, I consented their requests and I decided to walk back to school and from there about 800 meters (around half a mile) more to tell my father where I was and then come back to keep playing.

I was walking the long path thinking of how much fun I had been having. I was already planning my next game tactics and moves in my mind so I could win. I was walking with these thoughts on one of the main streets near my house when I saw my father’s car with him in the driver’s seat and Toñis, one of my oldest sisters, in the passengers’ seat. I first crossed eyes with my sister who suddenly opened her eyes wide open, jumped to the front, extended her arm and pointed at me while saying something like “There he is! There he is!”

The car stopped and she, being worried and with some tears opened the car’s door for me and asked me where I was. Apparently they had some time looking for me, and most likely my uncle Gilberto and one my parents’ employer would also be looking for me. They had already called several people asking them if they had seen me. And even more, right before they found me, my dad and my sister were on their way to the local TV station to broadcast a missing child ad. My sister was really worried. I can’t remember all what she said, but among all her words she thanked the Creator.

My mom who was out of town that week and didn’t know anything about it, she called that night to ask if I was doing okay because she said that she have had a very strange dream the previous night. In her dream she saw me at a younger age and tried to carry me in her arms, but when she did it my head fell off from my head (I know it sounded pretty much like a fatality in Mortal Kombat). And if I remember right, she said that those thoughts had been around her head all day.

Coming back to my dad and sister, right before getting in the car and when I saw my sister’s reaction, I had got worried and I had started to imagine the prelude of a great Apocalypse, the great Final Judgment and the rigor of an unmeasurable punishment fall upon me. Or stated in less dramatic words: “Game Over” for me. But oh, surprise! There wasn’t any single reproof. My dad seemed calmed even though I could see a hidden joy of seeing me in his eyes that were reflected on the rear mirror and beyond the glass of his sunglasses.

My dad continued driving. We were heading home. From the moment I had got into the car, my dad asked me with a calmed voice where I was. I told him that I had been playing videogames at one of my friends’ home and I had come back to ask for permission to go back there again and continue playing.

I still remember that behind his apparent serious face and slightly thick mustache, there was a spark of relief and joy. I cannot remember today the words he said, but I do remember him describing me the situation my absence had caused. He even asked me some thoughtful questions to make sure I was getting the big picture. I also remember that he even made me think of the relationship of time with my activities of the day, and how I used it to finish my homework. With his eyes looking on the way in front of us, to the sides, to the rear mirror towards me and the cars behind, my dad had now a more thoughtful and pondering expression. It was at that moment when he asked me if I should go back to play videogames that evening.

The way he managed the situation surprises me to this day.  I don’t know how he did it, but I think that what he said didn’t have any particle of desire to make me feel guilty, sad, angry, or anything of that sort. Instead of that, it seemed to me that he really wanted to shed a light of understanding in my mind. He opened my mind and took me out of the videogame mode and brought me back to real life. He did it carefully and gracefully. So after that brief conversation he asked me if should go back to my friends’ house to play videogames; I told him that I shouldn’t. But I told him out of my own conviction and own desire; perhaps with a mix of wanting to be better, help my dad, and, at the same time, thinking that it would be very late for me to go play, come back, and finish my homework.

If you read Spanish and want to know what kind of person my dad was, you can read his obituary on Obituario a Jesús Rosas Núñez (papá).

The night before I went “missing”, I had written a brief note to my dad. The note was something simple and trivial, but it ended with a phrase such as “I will always love you” or something like that. My dad after reading such note and seeing that I wasn’t coming back home at the time I should have, he thought the note had a goodbye tone. I wondered once how much that letter had influenced my dad to manage the situation in the way he did it that day.

There is a lot I could learn from this experience. I can mention some of them below:

And there you go, this was my experience as a missing child. What do you think? Have you ever gone missing in your childhood? What happened? Or have you ever had one of your children gone missing? What solutions do you suggest to prevent it? Share your opinion on the comments section below.