Meet the Mormons, the latest movie by The Church of Jesus Christ of Latter-day Saints appeared announced on the Ensign magazine (page 133, May 2014), but the Media seem to have caught on this since last Tuesday (August 19, 2014) when more details about the film were given during the Education Week at BYU. The film is actually a rated PG feature-length documentary and what makes it different from all the other films made by the Church is that it will be shown in regular theaters and people will pay to watch it. All net proceeds (box office proceeds less distribution expenses) will be donated to the American Red Cross [1], which provides emergency assistance, relief during disasters, and education mainly in the United States [2][3]. 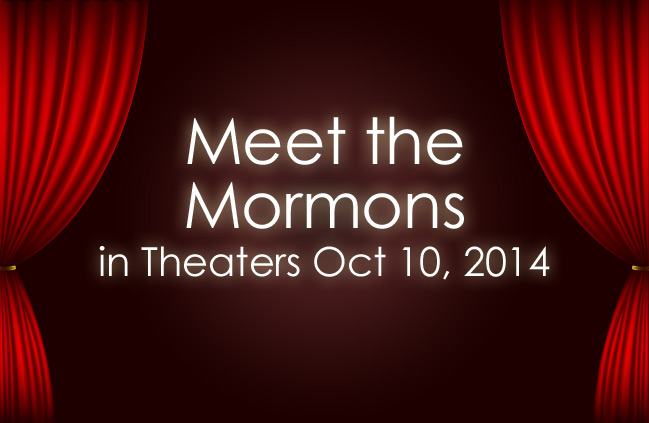 Where Can You Watch It?

The film Meet the Mormons will be released in movie theaters across the United States on October 10, 2014 [1]. According to the film’s writer and director, Blair Treu, he presented the idea to the First Presidency in late 2010. Once the movie was finished, there was an open house where Meet the Mormons was shown. After seeing the positive response from the guests (both LDS and non-LDS) Church leaders decided to expand the reach of the film so members and friends would be able to watch it on the big screen in their own cities and towns. The plan is that, in a later time, it will also be shown online, on cable TV, and on visitors’ centers [4]. Although there aren’t any official comments regarding the release of the film in other countries, it wouldn’t be surprising that it would be shown in all visitor’s centers in several languages around the globe.

[Related Post: From the Dust, the Book of Mormon Comic and an Interview to the Author]

What Is it About?

Based on what it has been disclosed so far, the documentary seems like an extended version of six I’m a Mormon profiles compiled into one long documentary. As you may know, the I’m a Mormon campaign features the stories of some members of the Church in order to challenge the misconceptions and improve perceptions the general public may have about Mormons [5]. As the I’m a Mormon campaign, Meet the Mormons aims to portray a glimpse of how some members of the Church live their faith, depicting their struggles and passions in “day-to-day realities.” [6] And according to producer Jeff Roberts, it does it “in a way that is entertaining, uplifting, and engaging.” It is not about preaching, but informing [4].

The six featured people in the film are people from the United States, except two, one from Nepal and one from Costa Rica. The official film website (www.meetthemormons.com) lists the following members shown in the movie:

Ken Niumatalolo, a Pacific Islander American Head Football Coach of U.S. Naval Academy in Annapolis, Maryland. His job position and performance have brought Media attention [7]. In the film’s summary he is depicted as someone who canceled crucial staff meetings for his team on Sundays in order to honor the Sabbath day.

Jermaine Sullivan, a youthful and enthusiastic African American LDS bishop (now a stake president [4]) in Atlanta, Georgia. He and his wife have three sons [8]. He is an academic counselor to 200 students.

Dawn Armstrong, a white homeless single mother (now married [8]) from Salt Lake City, Utah. She had lost hope before meeting the LDS missionaries. She is shown in the film as a mother who overcame several life struggles and whose new and positive life involves preparing her son to serve an LDS mission.

Gail Halvorsen, a 93-year old white World War II veteran also known as “The Candy Bomber” and “Uncle Wiggly Wings”. He is from Salt Lake City, Utah, and is historically known for dropping candy from his plane to children below, during the Berlin Lift during 1948–1949. This inspired other crews to do the same and produced major attention [9].

Bishnu Adhikari, is a Nepalese Engineer and Humanitarian. He builds roads, schools, and water systems in Nepal through different organizations. He is dedicated to helping to improve the quality of life of his family and others in his country. He was honored with the “2010 Humanitarian of the Year” nomination by Choice Humanitarian [10].

Carolina Muñoz, is a Latin American wife and mother and one of the top amateur kickboxers in her native Costa Rica. She and her husband also run a charity to help less fortunate in their country. Being a training instructor and coach, as well as a university teacher, physical therapist, and a world runner-up in the International Kickboxing Federation (IKF) [11] is not surprising that she has caught the attention of newspapers such as the Nación, a Costa Rica based newspaper [12].

About the selection of candidates to feature the film, scripts, locations and other aspects, Blair Treu said that Church leaders never told him “who or where or what to shoot” and after having “so many good options” he and his team ended up choosing six members for this documentary [4]. However, trying to embody the entire LDS Church in six profiles seems impossible. There are several groups of people left outside of the picture who are also part of the worldwide LDS community, such as those faithful members who are sick or have physical disabilities, those who live in poverty, and members of the Church who are part of different cultures found in many countries. Children, young men and women, young single adults (18–30 years old), single adults (31–up), widows, and divorced men and women are also excluded.

The film portrays six individuals: 4 people are from the US, 1 from Nepal and 1 from Costa Rica (2 from the international community); 2 woman and 4 men; 1 African-American, 1 Latin American, 1 Pacific Islander American and 3 whites; 6 married people and 0 singles [13] [14]; 4 people who have received either major awards and/or recognition in their fields and 2 whose jobs or job performance is not so much advertised in the movie review. There are many ways to see this, if you do have in mind more of these “statistics”, you may mention them below in the comments section.

[Related Post: Fewer LDS Schools and Mexico in the Vanguard of Missionary Work]

Despite anything Meet the Mormons is an innovative and brilliant idea brought to reality. By making this documentary and distribute it commercially in movie theaters, the Church donates all net earnings to humanitarian work while inviting people to know more about how LDS members live. If this project meets the Church leaders’ expectations, I don’t doubt that more films would come and additional charitable causes would be met. For those who live outside of the US we wish similar plans came to reality in our countries. If that were the case I would definitely have invited several people to the movie theater to watch Meet the Mormons on the big screen.

In the meantime, you can find the official information about the film here: www.meetthemormons.com

And by the way, what do you think about it? Any thoughts on this? Please share them below in the comments section.