Last week, while in Mexico City, I came across a restaurant named La Cocinita de San Juan, which translates to “the little kitchen of Saint John.” It is a quite interesting place that serves pre-Hispanic and exotic food. Among the less common poultry and meat offered are quail, pheasant, ostrich, crocodile, wild boar, buffalo and others. Moreover, there are also other exotic dishes such as chinicuiles (1), maguey white worms (2), scorpions, and escamoles (3) among others.

It was almost noon when I was walking downtown on the Ernesto Pugibet street. The restaurant facade wasn’t noteworthy, but when I saw the menu I had to make a stop and give it a try. 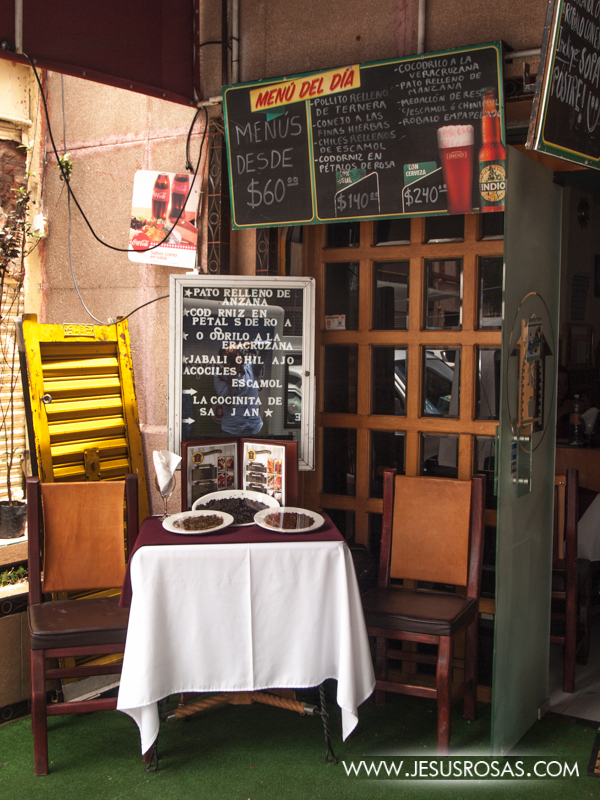 The exotic dishes caught my attention. Once inside I didn’t see much, but maybe around six to eight squared tables on the main floor. Each table with four typical wooden chairs and burgundy tablecloths over white ones. There was poor light inside so I decided to eat at the only table found outside. Despite the fact they opened at 10 AM it looked as if they were just opening and nobody seemed to notice me. A visitor had to go around and find the waiter who seemed busy doing other things.

Finally, I got the menu and read it. I found 14 different types of starters, 13 types of soups, 10 types of tacos and 22 main dishes. There were also daily combos and there were other dishes not included in the official menu. It seems that they have an alternative menu in constant innovation and experimentation. A recent dish is deer with a red sauce mixed with chinicuiles for their strong flavor; while escamoles, which have a softer flavor, are being mixed with some types of fish such as robalo (4) to come up with additional options. Besides that, they are also in the process of making filled pastries (popularly known in Mexico as empanadas) with scorpions, shrimps, and grasshoppers. So, I doubt La Cocinita de San Juan will be short on menu options to offer. 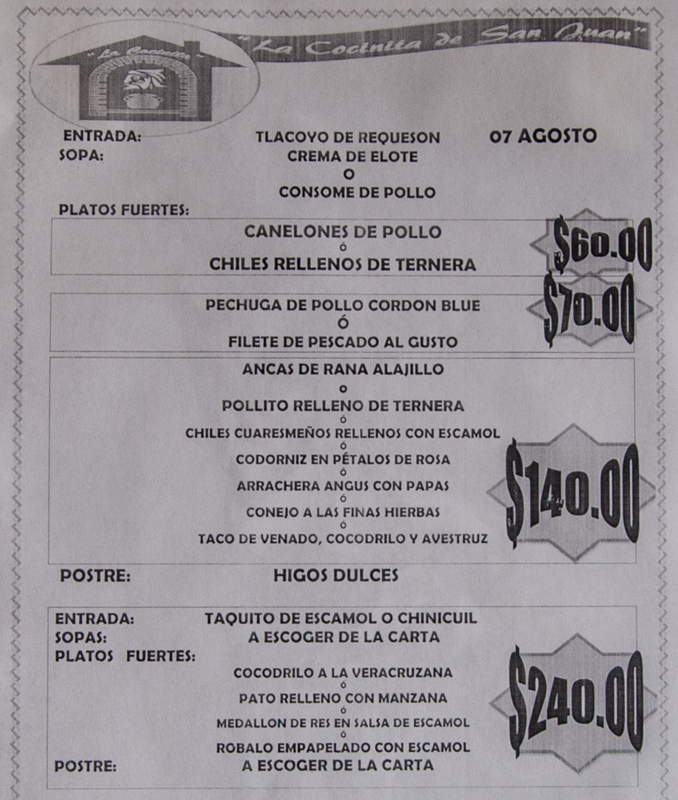 ▲ Examples of daily combos (Menu is only in Spanish)

That day I tried the pecan and rose petal soup and two tacos, one of crocodile meat and the other of escamoles (3). The soup tasted more towards the pecan’s side and it wasn’t as hot as I wish it were, but I still enjoyed it. Its texture wasn’t completely smooth because of the pecans, it made think of a refined champurrado (5). 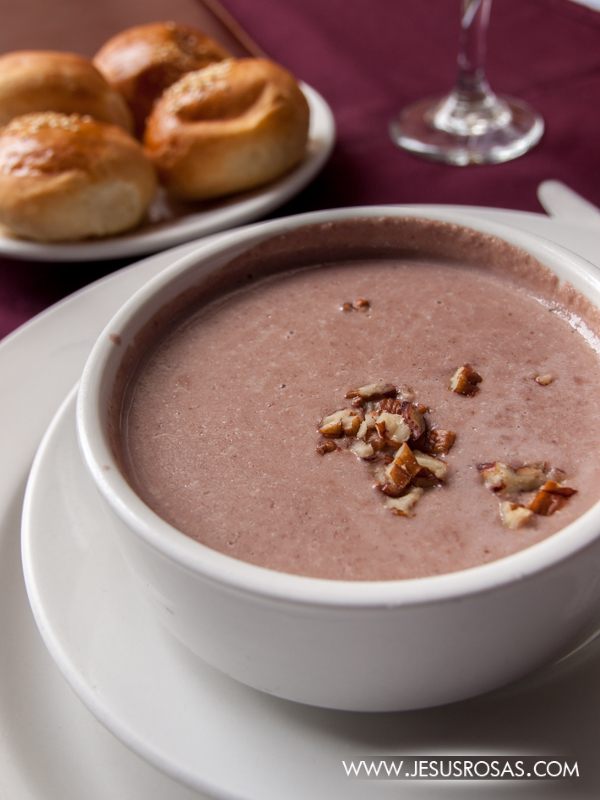 The tacos could also have been hotter, especially the tortillas. At the moment they brought them to my table, I noticed that the tortillas had been reheated instead of freshly made as you can commonly find in Mexico City streets. I continued with the crocodile taco. The taco didn’t have anything else but chopped meat in medium size cubes and cooked with light flavorings. Its taste was weak and at some point, even the tortilla flavor seemed to be stronger than the meat. The crocodile meat made me think of chicken breast in flavor. It usually needs some sort of gravy or stronger flavorings in order for your palate to notice it. Its texture was also similar to chicken breast or a very firm-textured fish. It didn’t taste like fish though. I’m sure if you were given it to try without knowing it is crocodile you would think it would have been chicken. 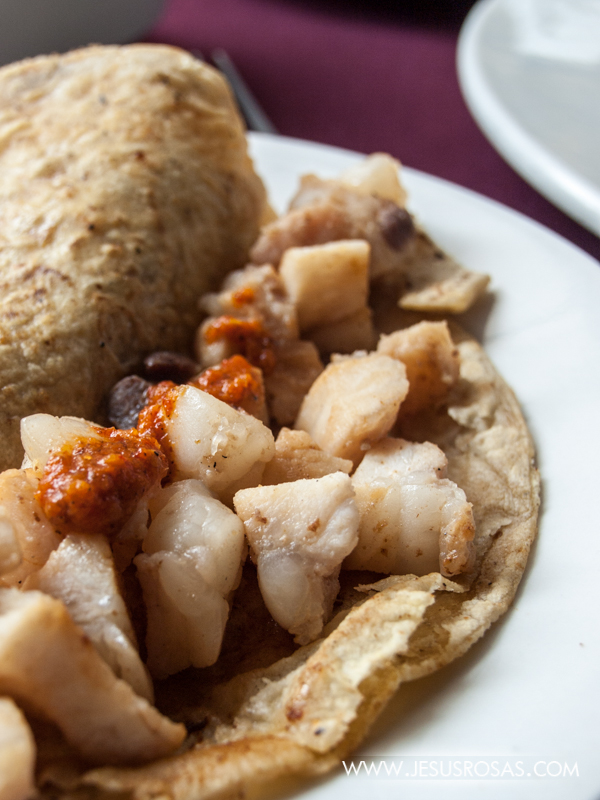 The escamoles tacos had escamoles mixed with green peppers or something similar (I’m not really sure) and some onion. The escamoles had a soft flavor and even a slightly sweet touch. 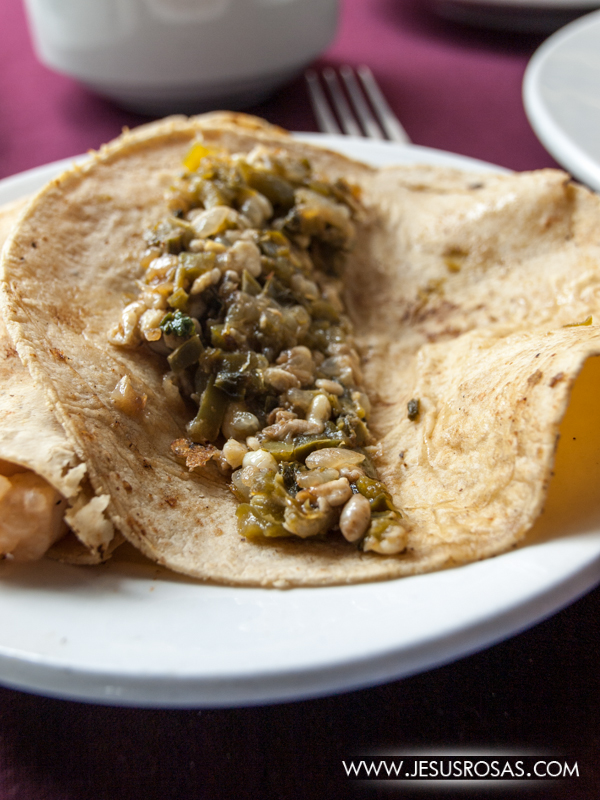 After eating and paying my bill, I talked to Pedro Felipe Hernández who is the owner of the restaurant. He told me that the restaurant had 13 months in operation. It all began with his dad who sells frozen meat. They both started selling chicken and they brought more options such as turkey, duck and so on up to the point that customers started asking for less common types of meat such as crocodile. Afterwards, they decided to prepare the food too, so La Cocinita de San Juan was born.

The chef is Benjamín Ibañez who was born in Oaxaca, Mexico, and despite lacking the formal education in gastronomy, he has acquired experience over the years and has been able to stand out. Pedro Felipe even said that chef Ibañez gave a couple of dishes to Pope John Paul II in one of his visits to Mexico.

One of the waiters recommended the specialty of the house, which are Jabalí En Chileajo (wild boar in chili and garlic sauce and also the most popular dish here) and Pato Relleno Con Manzana, which is oven-cooked duck filled with apples and blueberry jelly. Pedro Felipe also added the Platillo de Degustación to the list of recommendations. This latter dish is a tasting dish for one person that includes three different types of soups in small portions (nopal with escamol, huitlacoche [corn smut/fungus], and artichoke), a taco of escamoles and the main dish, which is duck and wild boar and an option between ostrich or deer. The dish costs 350 MXN (about 27 USD). There are also desserts such as amaranth cakes, cheese crepes, fig desserts, and others. 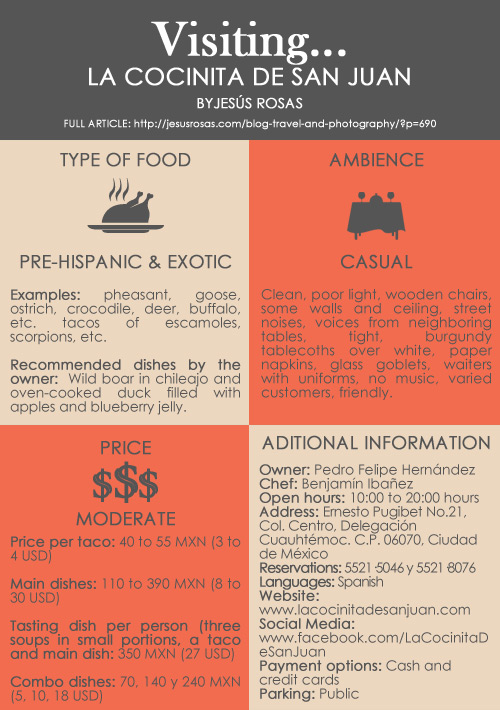 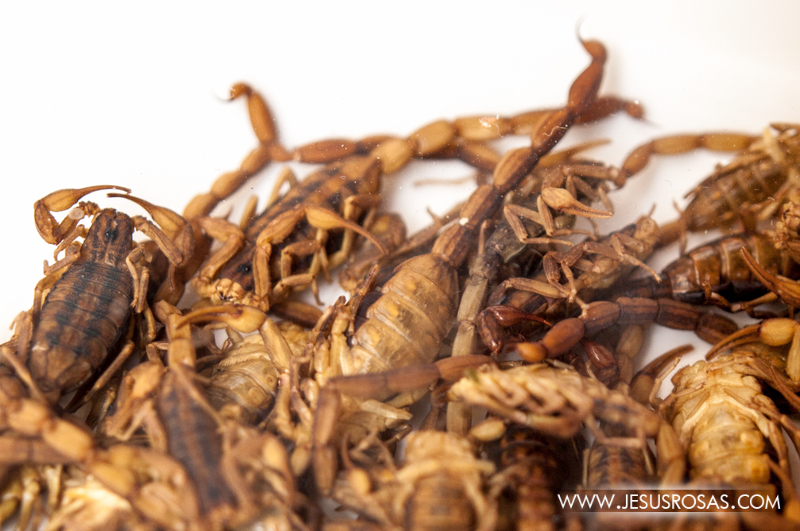 ▲ Scorpions on a demonstration plate

Among the visitors there are Mexican and non-Mexican customers, artists and politicians. The media have also found interest in this restaurant since there have been several TV stations (including the two main TV stations in the country) that have talked about this place. 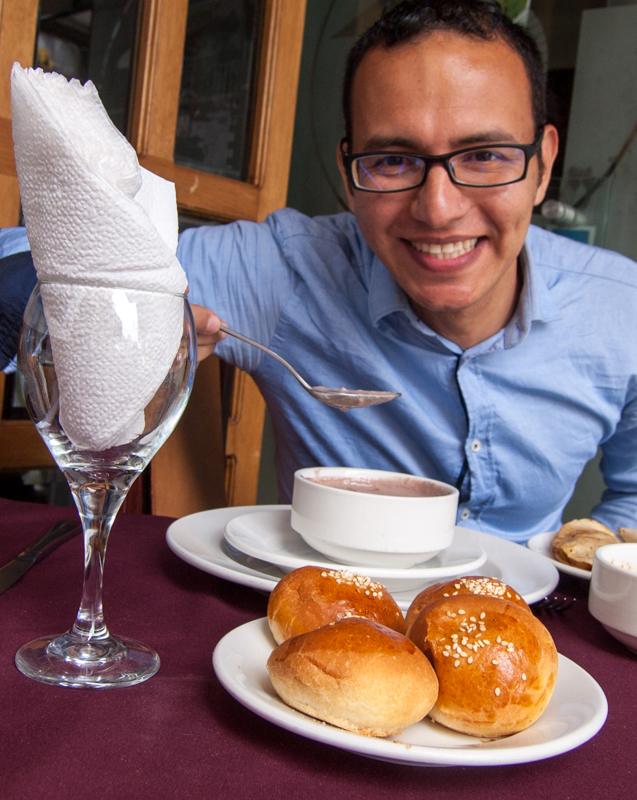 ▲ Here I am enjoying the meal

If you come to La Cocinita de San Juan you should also visit Mercado de San Juan Pugibet (a local market next to the restaurant). There you will find an extensive variety of fruits and vegetables, spices, condiments, cheese, jelly, poultry, fish, meat, and many more ingredients, both common and exotic.

And I have told you my own experience, but what about you? Have you eaten there? What did you order and how did you like it? Would you dare to eat some strange dishes? Share your opinion in the comments section below.