There is a movie titled The Painted Veil (2006) featuring Naomi Watts and Edward Norton that was filmed in Huangyao. When I found out about the movie and the town, I looked them up online and decided to watch the film and go to Huangyao, which I did in February 2013. Huangyao is about 200 km (124 mi) south-southeast from Guilin in Guangxi Province, China. It was founded in the year 927 A.D. during the Song Dynasty, so it is a thousand-year-old town. The name comes from the two most common family names in the town: Huang and Yao.

I arrived in Guilin by train and then went by bus to Yangshuo (another great place to visit. Click here to see pictures of Yangshuo). Once there I negotiated with the hotel manager the price for the night plus a tour to Huangyao the following day. The hotel was 70 RMB (11.43 USD; 148.5 MXN)  and the tour with transportation and tour guide 140 RMB (22.86 USD; 297.1 MXN). The following morning I was very eager to visit this ancient town.

Here are some of the pictures I took in Huangyao. Some descriptions are at the bottom of each picture or set of pictures. Individual pictures can be enlarged if you click on them. 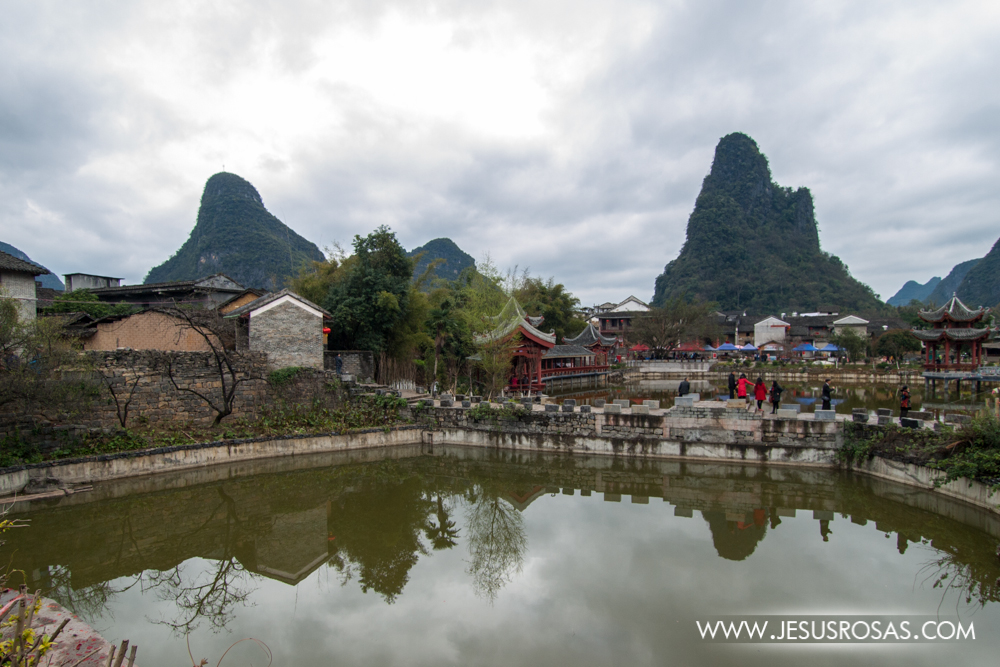 Huangyao is surrounded by karst peaks. 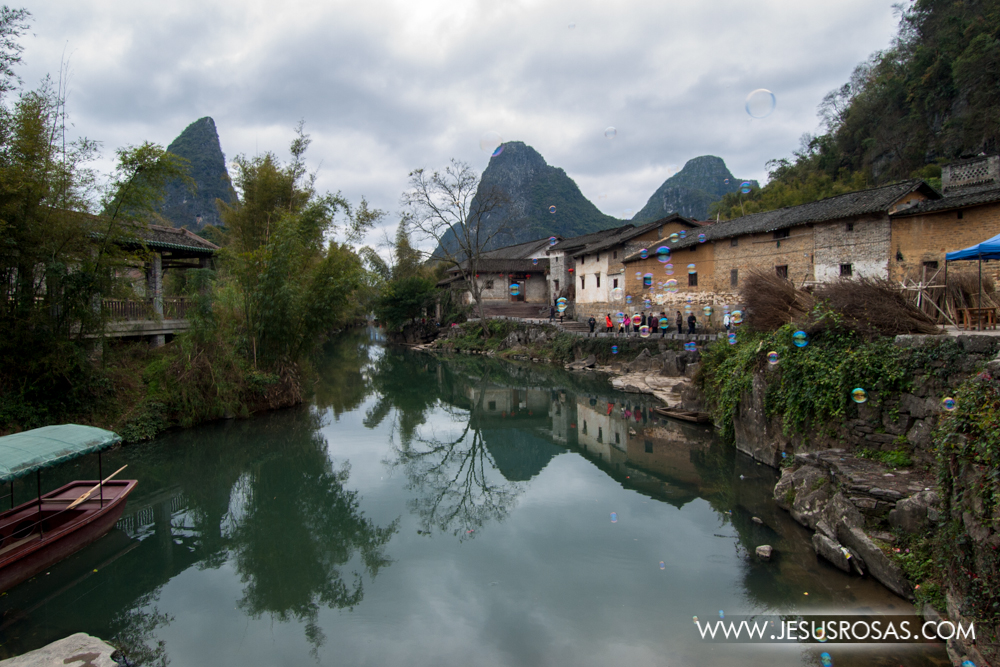 Several homes were built to face the river. A girl (not pictured) made some soap bubbles right when I took this shot. 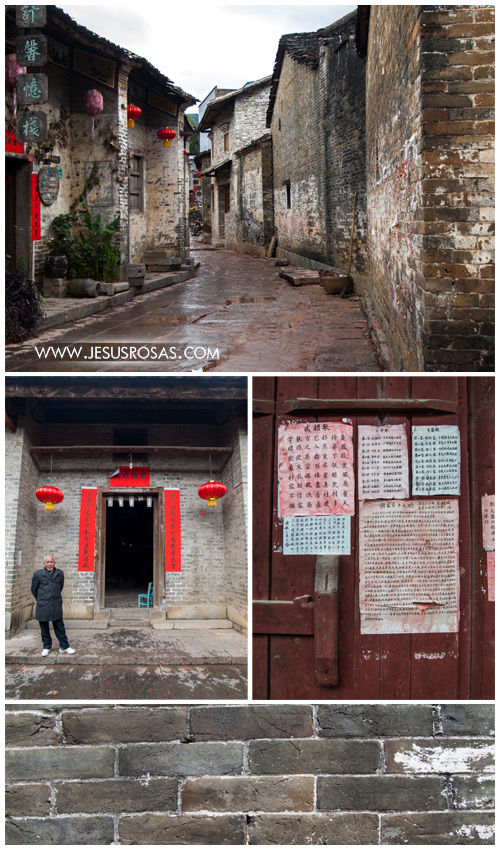 The ancient and narrow streets in Huangyao make you feel as if you had traveled to the past. During the Chinese New Year, people decorate their doors with red papercuts and other ornaments for good luck; you can see an example above. On the picture on the right side, there is a red wooden structure with papers, a fellow traveler told me they were names and family history related to the house we were visiting. Many homes are made out of this kind of grayish bricks you can see in the picture above. 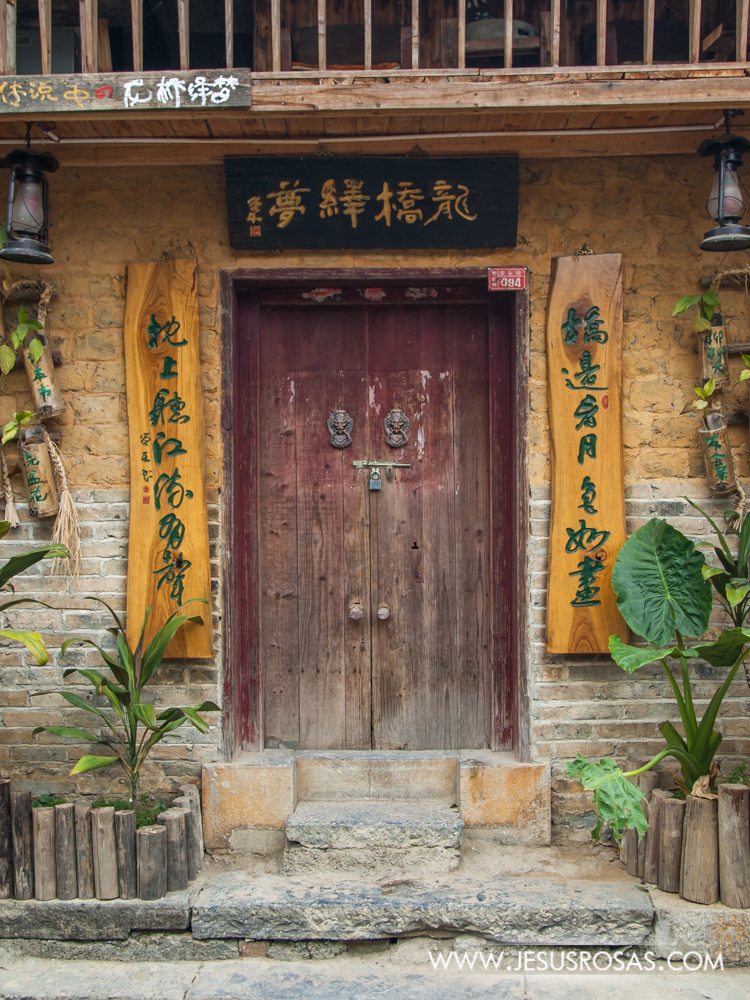 I was caught by the colors and decoration of this door. 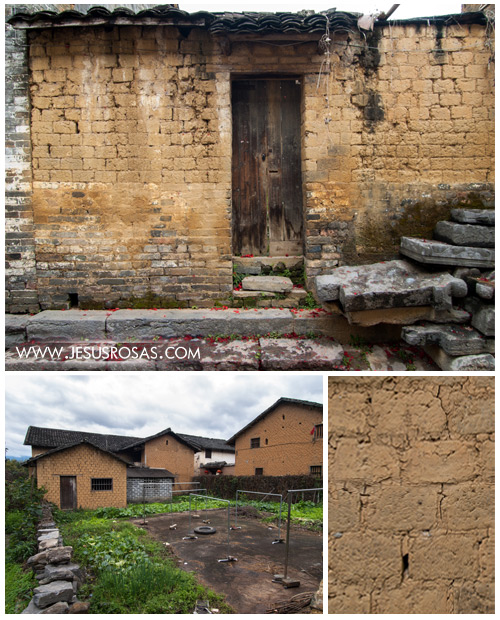 Not all the buildings in Huangyao are made out of those gray bricks mentioned above, here are a couple of examples. 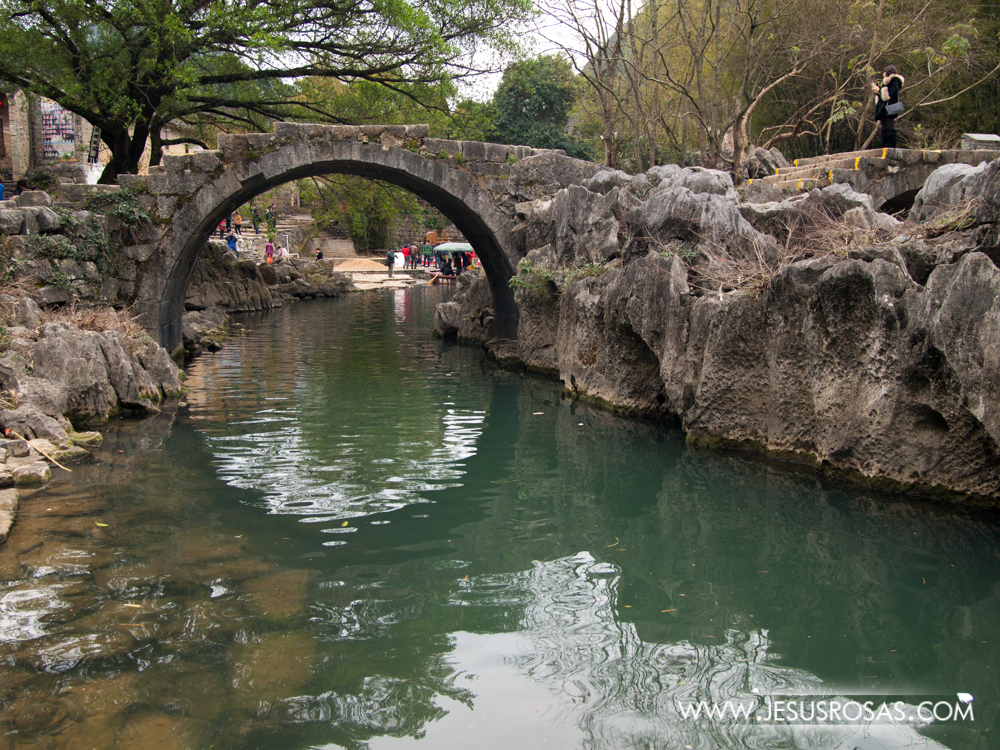 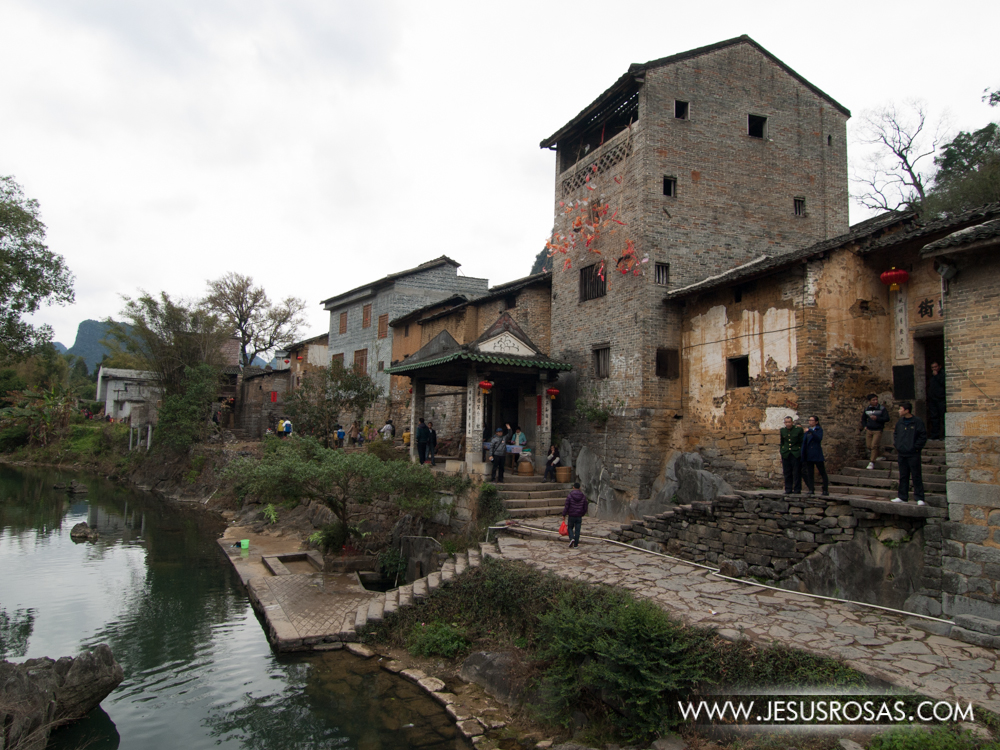 These are the homes in the other side of the river.

In these pictures above you can see some samples of streets and alleys. The last picture is a remodeled home and now serves as a tea house. 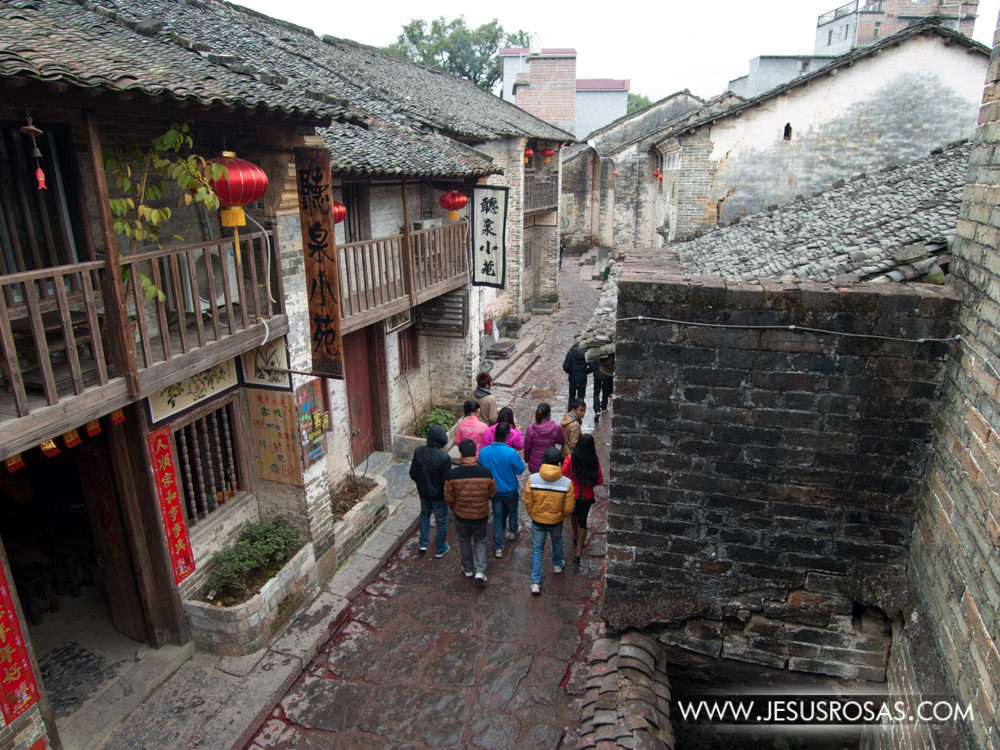 Many of the homes built in Huangyao are two-story structures. Chinese tourists walk through one of the main but narrow streets. 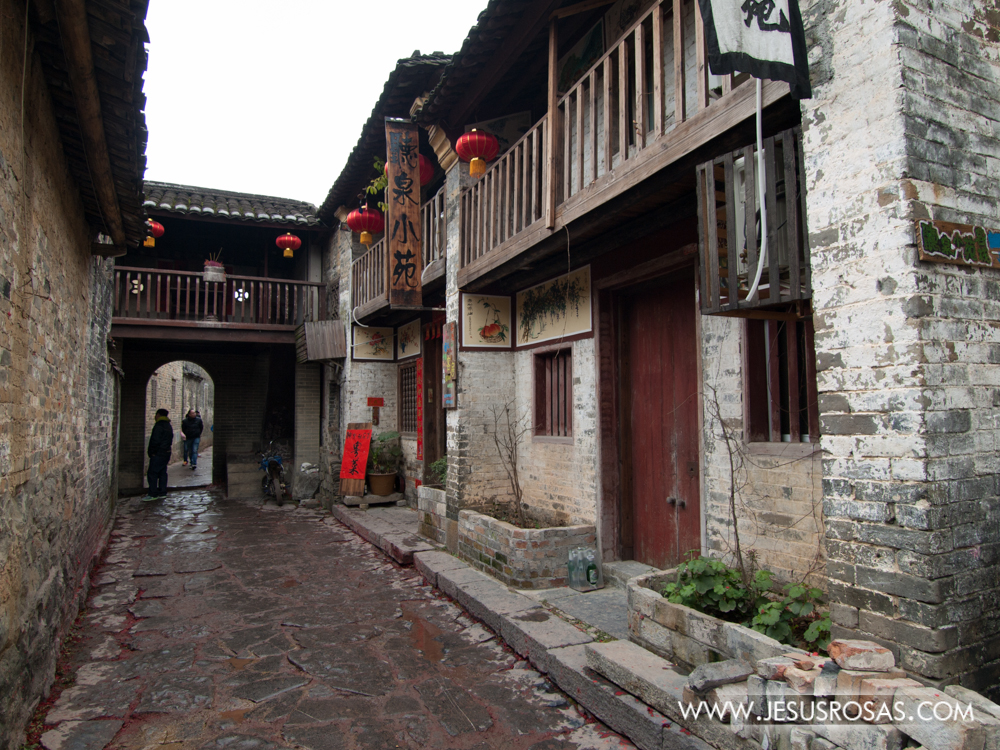 Several homes now are family businesses (shops, tea houses, etc.) that depend on the many tourists that visit Huangyao every year. 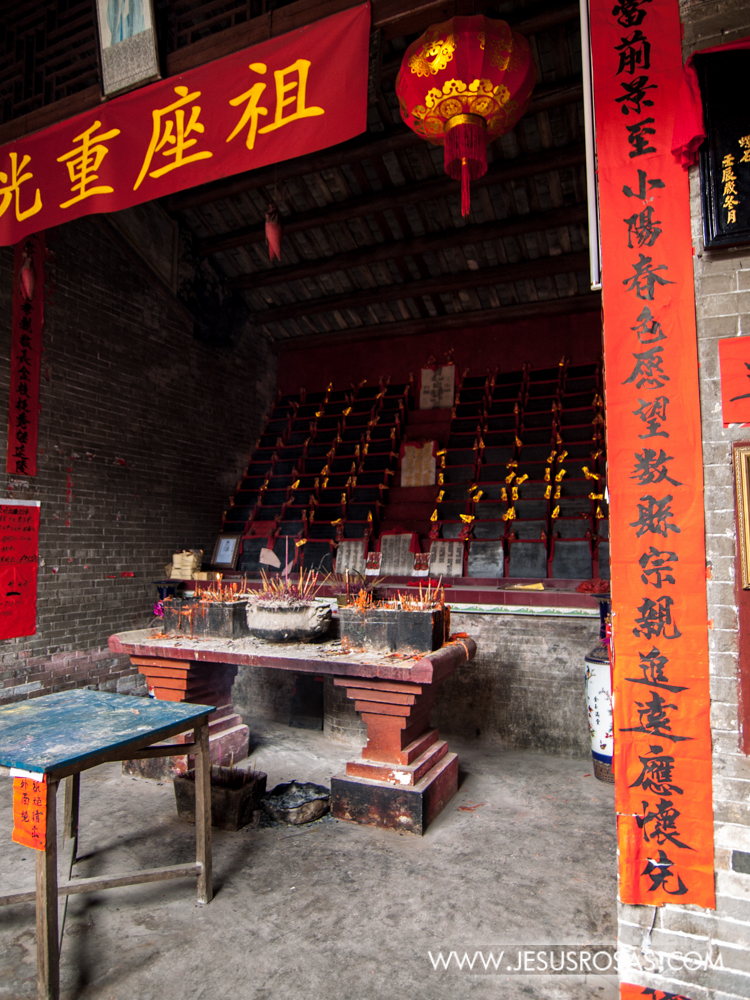 This is a small temple built in honor of a general who was appointed to protect the town.

One of Huangyao main streets is full of vendors who sell several local products. In the pictures above you can see few samples of food, including dry herbs, chili, pickled vegetables, rice pasta, candy and some more. 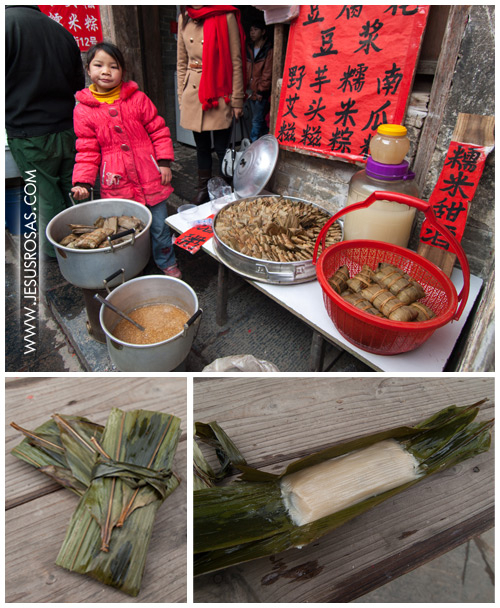 Here I came across with a different version of zongzi (sticky rice dumplings. In Chinese: 粽子) that looked more like a Mexican tamale from the south (i.e. tamales from Oaxaca wrapped in banana leaves) because instead of being triangular, it was folded in a square shape and wrapping leaves are green. A zongzi is a sort of sticky rice (oryza sativa) dough with fillings and wrapped in bamboo leaves. The one I ate here was slightly sweet but mostly flavorless, no filling, and really sticky.

Other samples of products. The picture in the top had local wines. Apparently a popular drink. 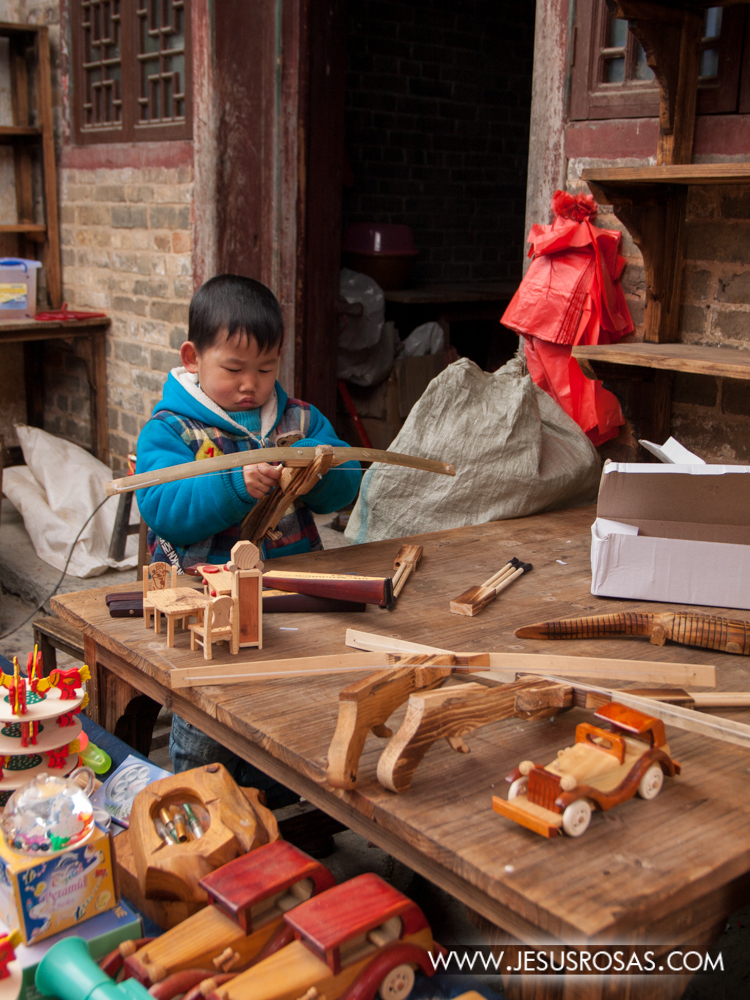 In Huangyao you can also find handmade toys. In this picture a boy is checking them out. 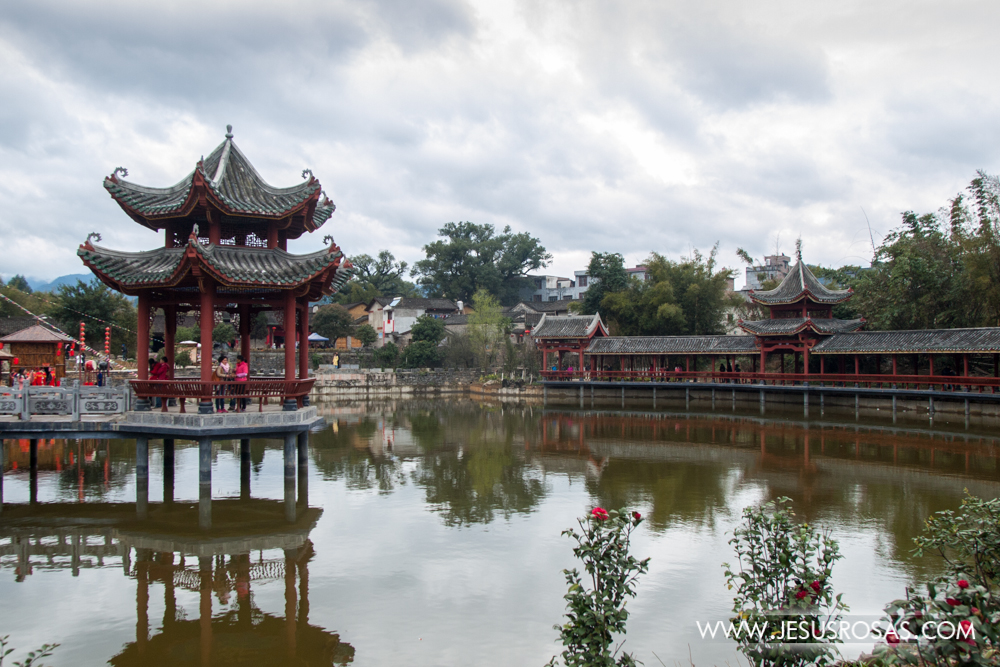 A pagoda on the water for those who want to contemplate the water and town from it. 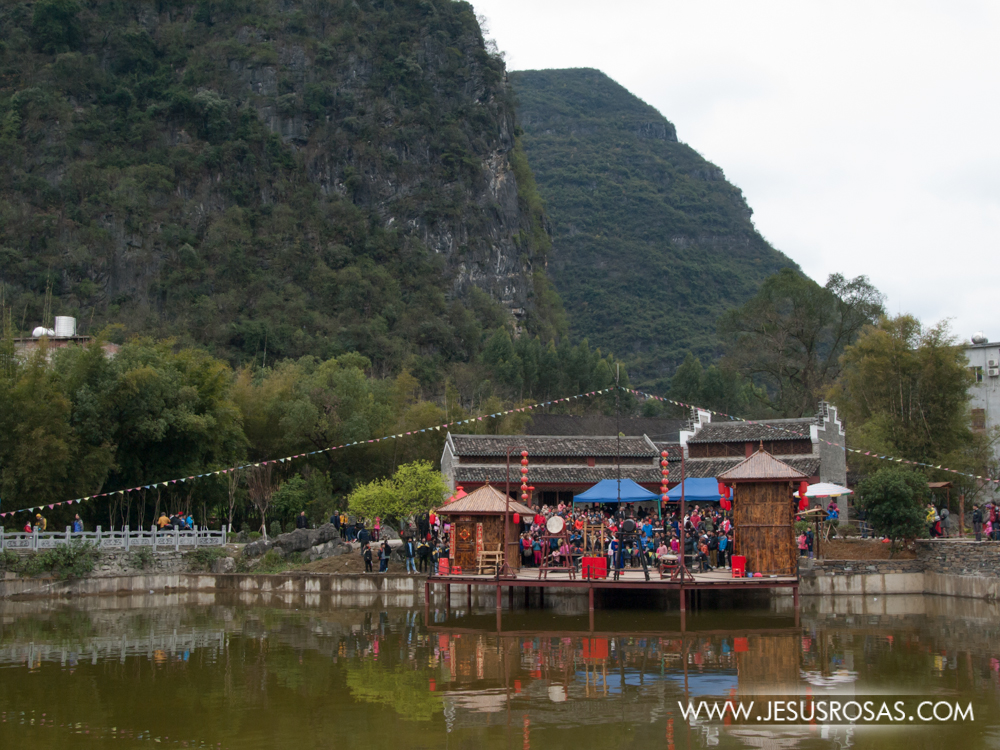 In the picture above you can see a newer stage where performances are held.

The day I went to Huangyao there was a small show representing weddings in traditional costumes. Some men from the audience were also called to participate in the “wedding” with some girls from the show. There was a presenter (man with the microphone) and other girls who after dancing were lined up and were assigned a man. Many of the men were very shy when asked to participate on the stage. 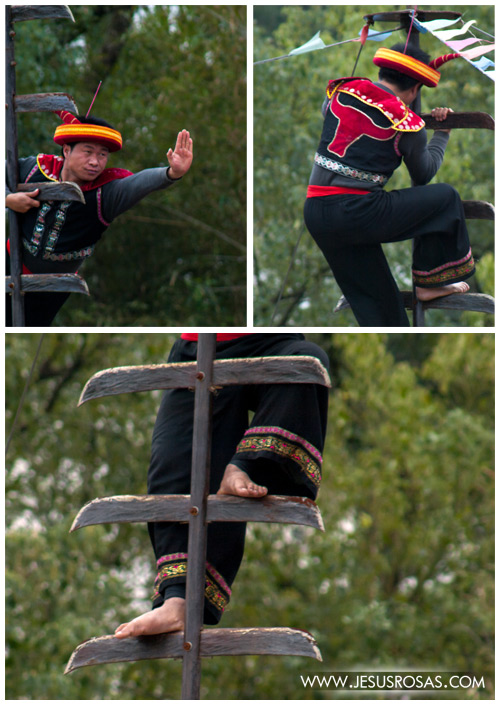 There was also a man who climbed a sort of ladder with sharp blades. No idea what was the purpose of it nor the story behind of it. 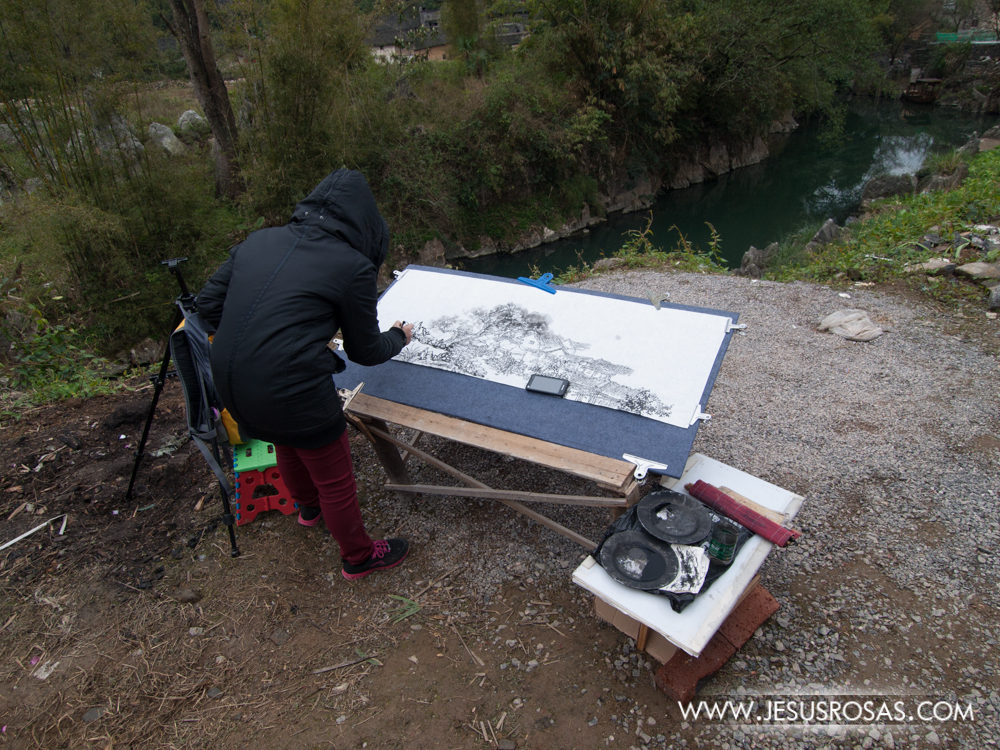 Near the entrance there were some artists drawing the landscape of Huangyao. 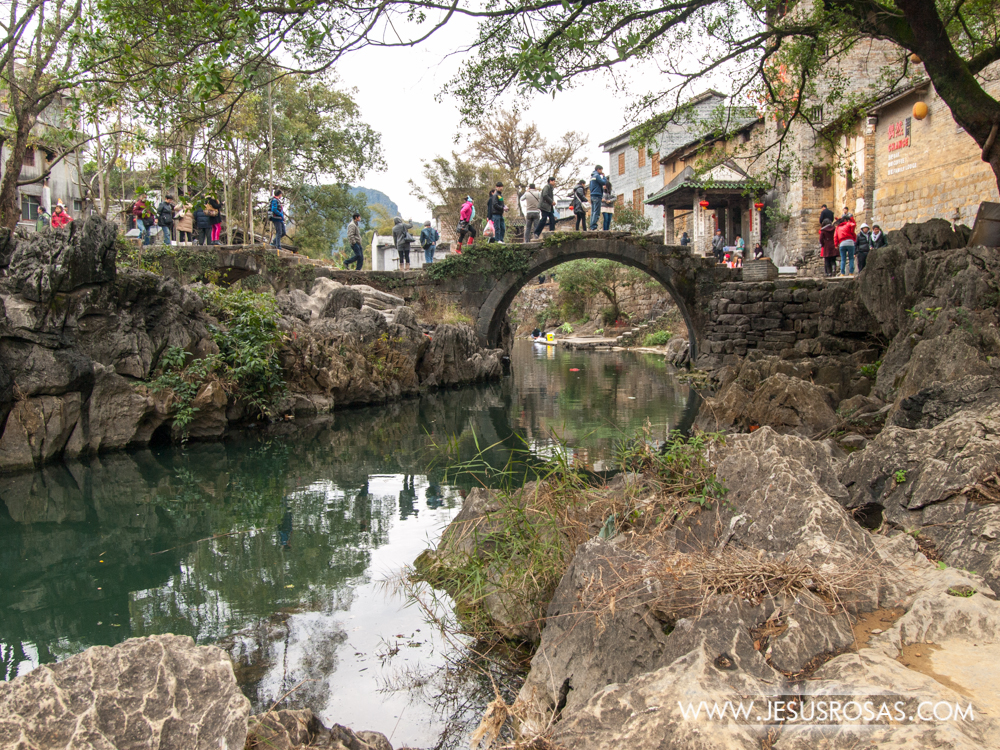 The exit through a bridge 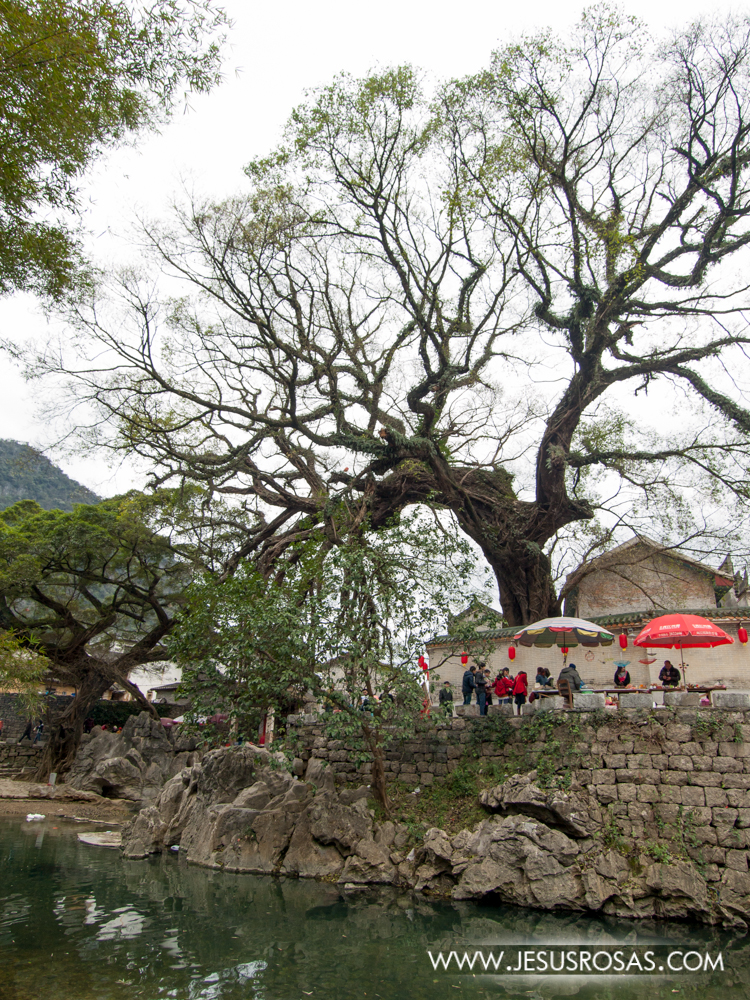 The oldest tree in town; a banyan over 800 years old. right at the entrance of the old town.