Spending a Night at The Great Wall

A trip to China is not a trip to China if you don’t go to the Great Wall. So I needed to make sure I went there and so I did. I went to the Great Wall four times and even spent the night there twice; one at a nearby cottage right next to it and the second time literally on the ancient floors of the Great Wall. The later was the best, no people around me, just a bright moon, thousands of stars, the long and legendary wall, and my camera. When people hear my story they remind me of tales and cautions: “Did you see any ghosts there?”, “a tiger could have come and eaten you”, “do you know that thousands of warriors are buried there within the rocks of the wall?”, “someone could have attacked you”, “a study has shown that people that sleep at the Great Wall can’t have children later on”, and except for the later that I may find out whether is true or not 🙂 nothing happened to me. It was amazing!

Here are some of the pictures I took of the Great Wall. Some descriptions are at the bottom of each picture or set of pictures. Individual pictures can be enlarged if you click on it. 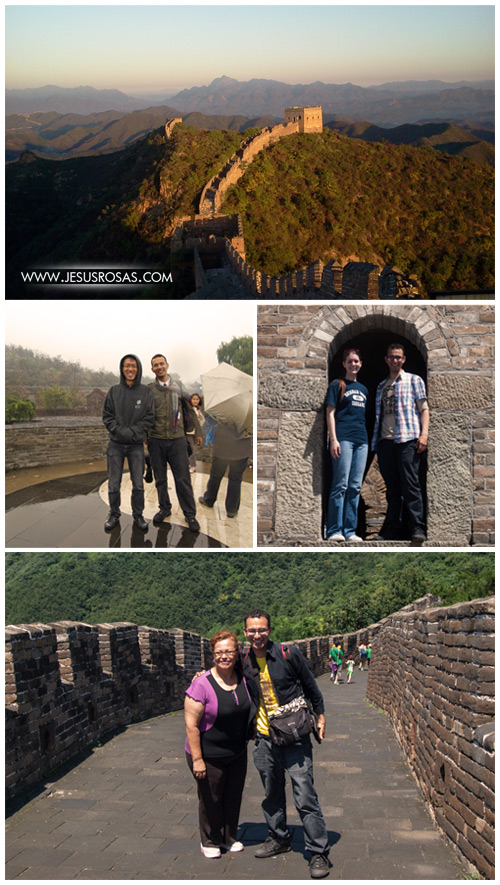 I went to the Great Wall four times during my first trip to China. The first time I climbed with Vincent from the UK, then alone, the third time with Sara from the US, and finally with my mom. 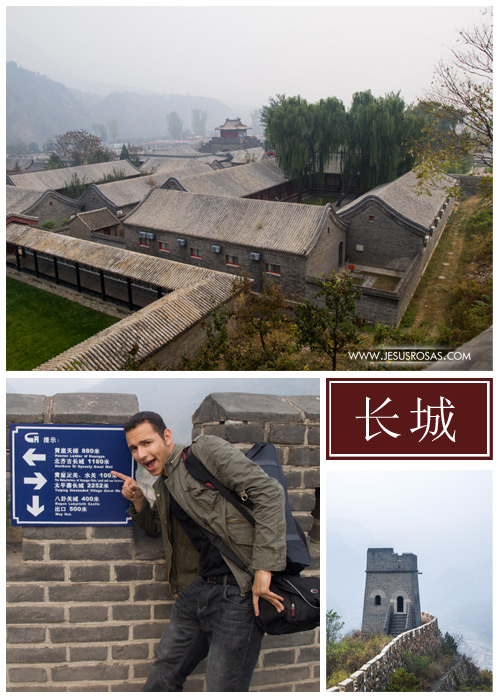 These first pictures were taken at the Badaling section. I spent the night at one of the cottages you can see in the picture above. Then there is me pointing at the sign indicating the routes to follow. Vincent and I went to both sides. The small picture above is one of the watchtowers of the Great Wall. 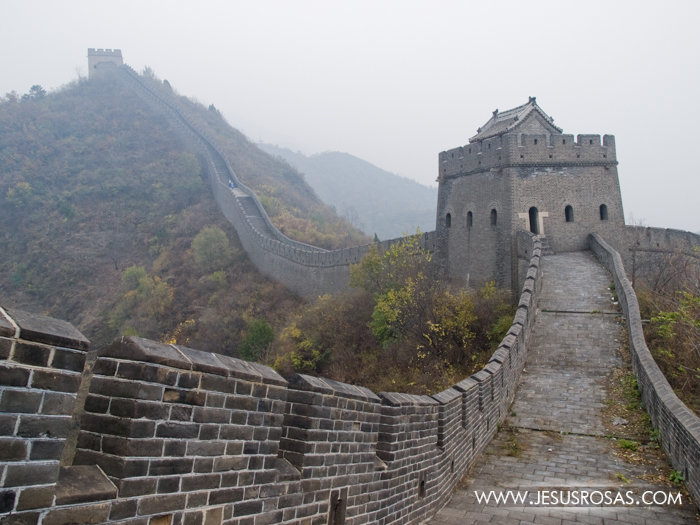 I went to the Badaling section in October, unfortunately it was cold and foggy. This is one of the towers. 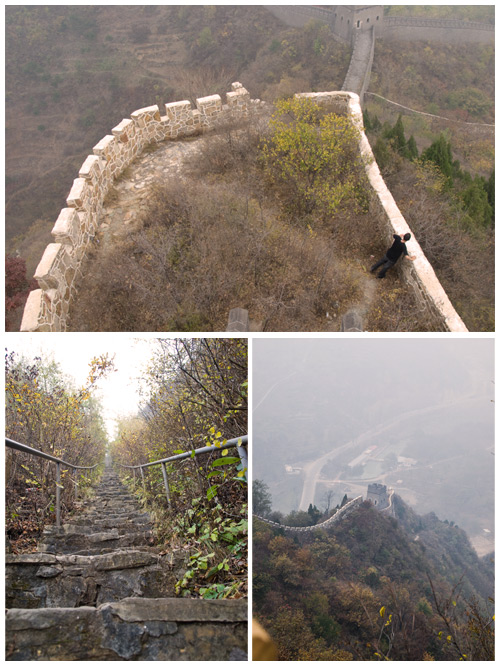 In the top picture I’m looking around. Then the ladder in the picture is called Heaven Ladder of Huangya. It is on the north side. You can’t even see where it ends. Then the other picture is another watchtower seen from the top of another section of the Great Wall. 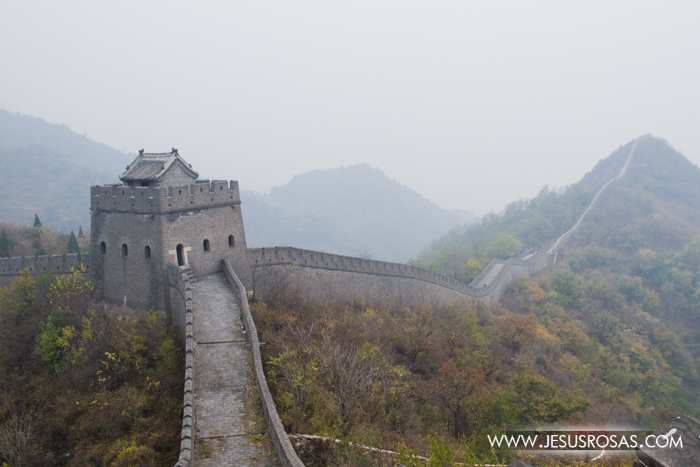 Another tower built in the Great Wall. 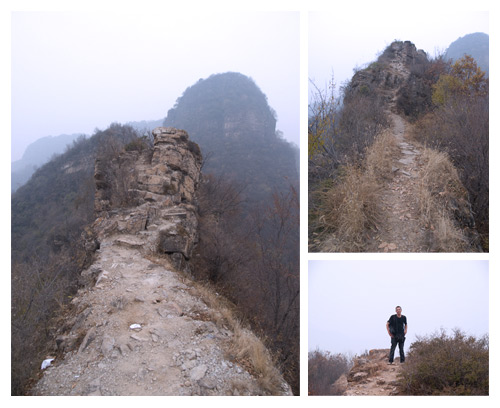 At the top of the Heaven Ladder of Huangya, you can reach a section of the wall that looks more like a passage marked with stones. If you go, be careful with the wind, you don’t want to fall to the bottom. 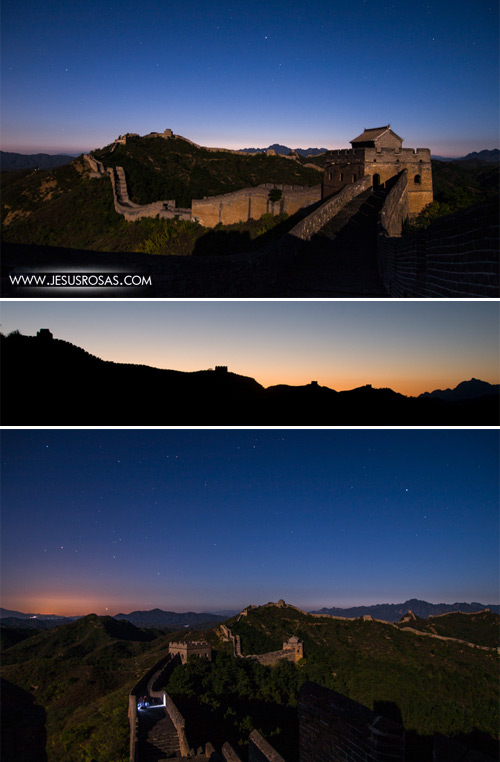 These other pictures are from a different section of the Great Wall called Jinshanling. I liked this section better than the other ones because of the views. I arrived right after the sunset and I was able to take some pictures at dusk. 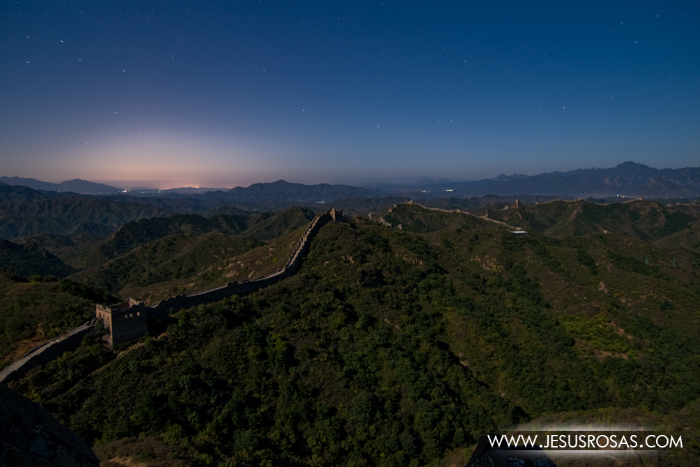 I was grateful that the sky was clear. In this picture you can follow the Great Wall far away. 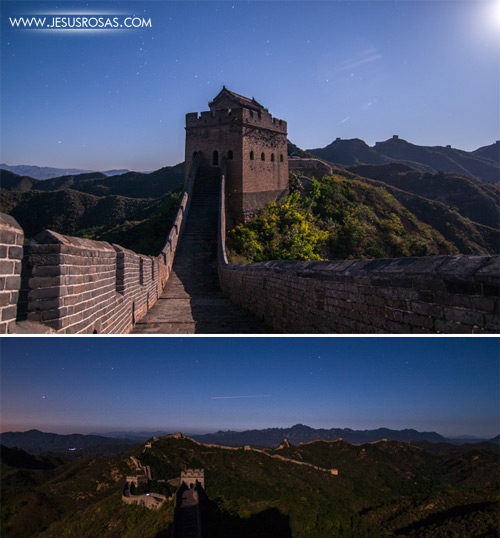 Once the sun was gone, I turned back to the east and realized that there was a bright full moon rising right above the mountains. In second picture, I unexpectedly caught a shooting star, I made a wish and slept having this view; yes, I slept at the Great Wall. Yes, this was the last image before closing my eyes, and yes, there was a shooting star… unforgettable 🙂 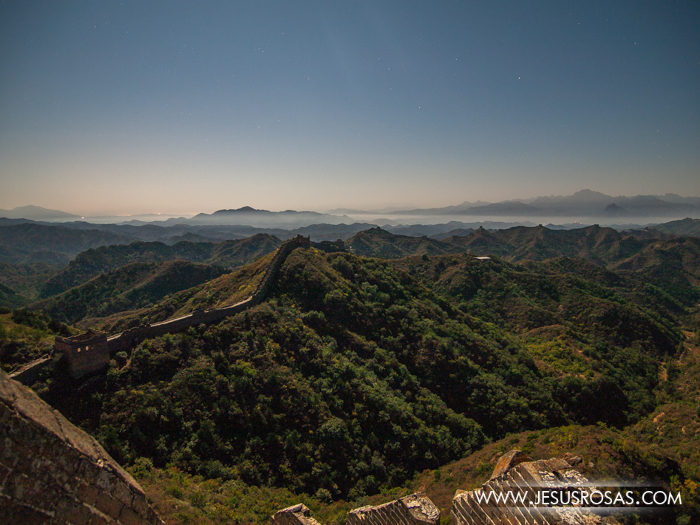 I woke up early in the morning just to take another picture. Here the moon is right at its top, some mist or dew appears far in the horizon. You can hardly see the wall in this picture, but if you look closely, you will notice the watchtowers on top of the hills. 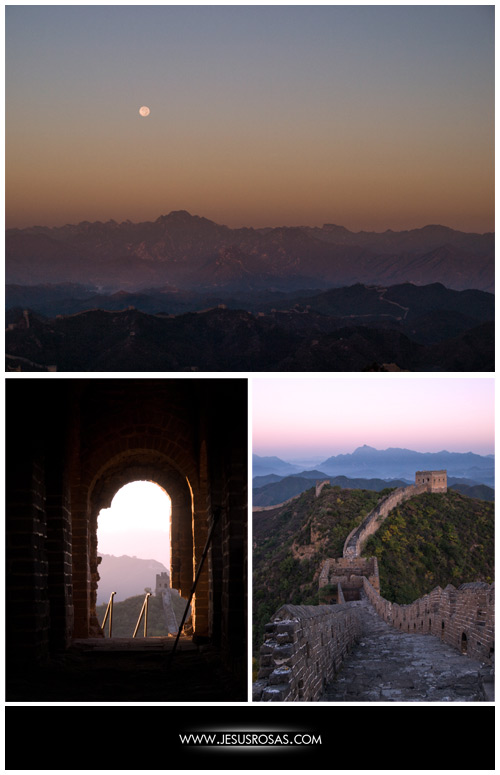 Here is the wall during the sunrise. The moon in the other side above the mountains. Another pray of gratitude for a new day and such a view. 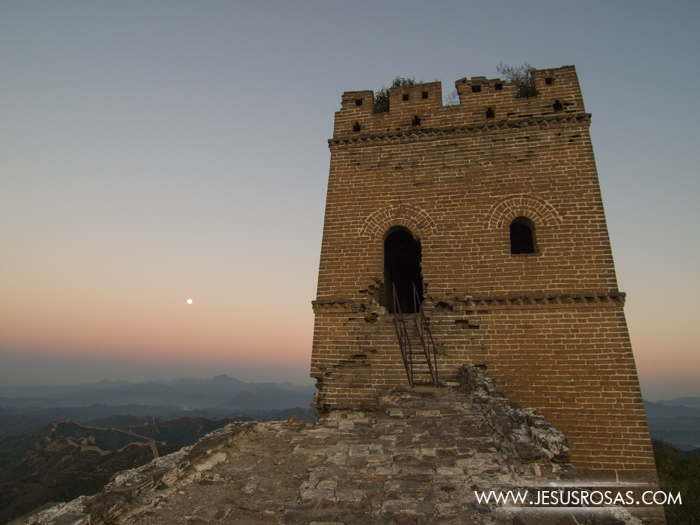 Many watchtowers have names, some are more a description than ordinary names; this tower was called the East Tower with Five Holes. The moon still visible. 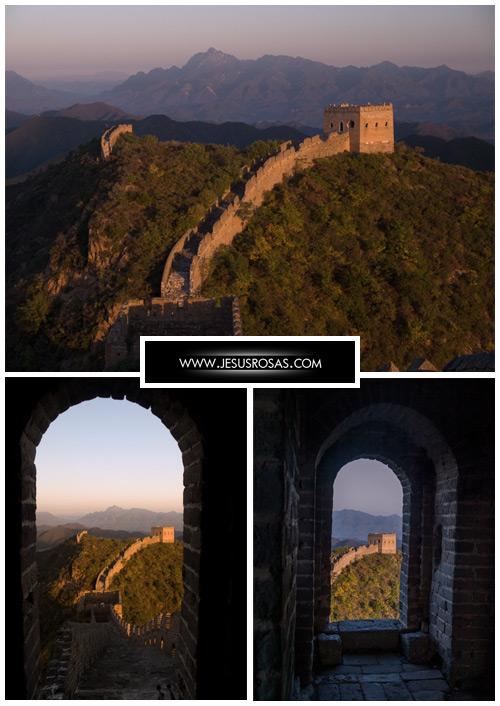 A view from the East Tower with Five Holes. 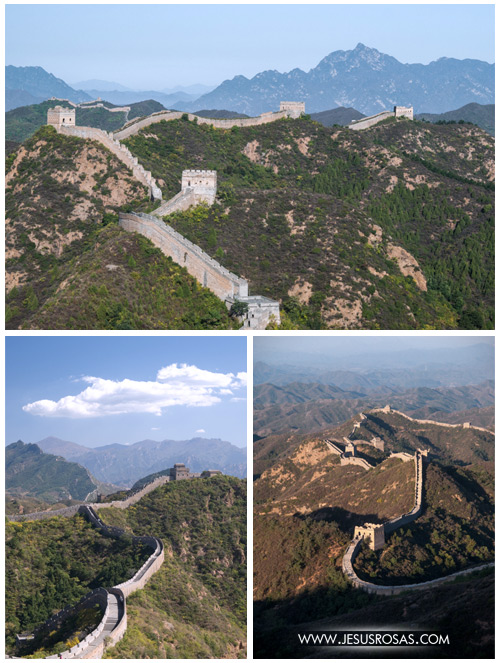 It is interesting how the colors change according to the sun’s position. Can you tell? 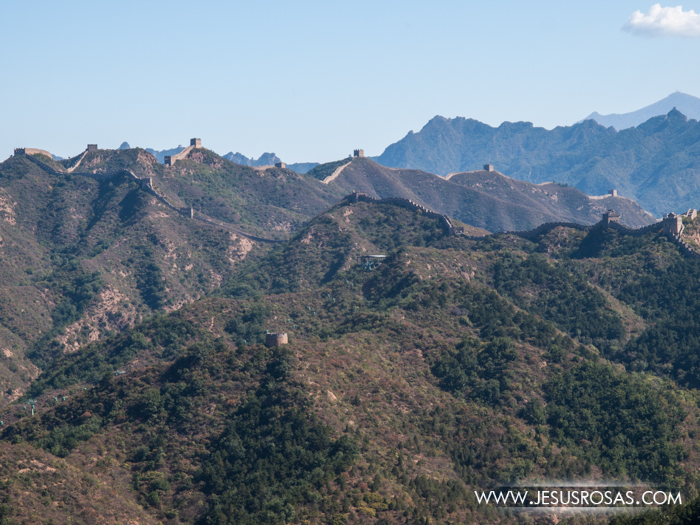 This was a hard shot, the sun was almost in front of me, but I didn’t have enough time to take that shot later. You can see in this part several hills “crowned” by the watchtowers. 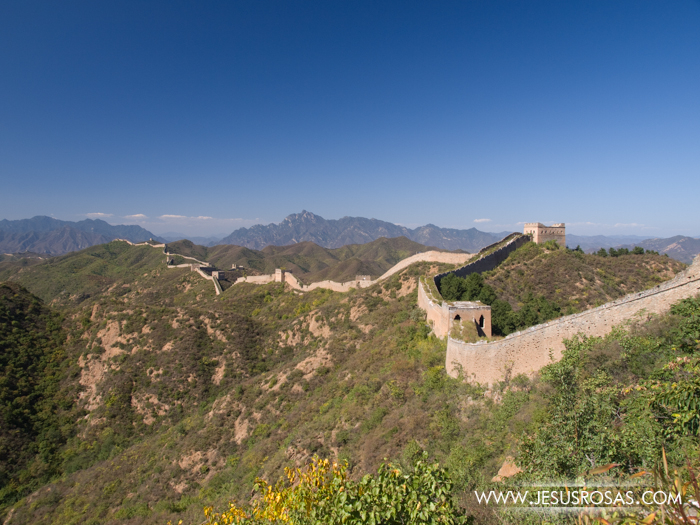 And this was the end of the allowed area. That part of the Great Wall was closed to the public. 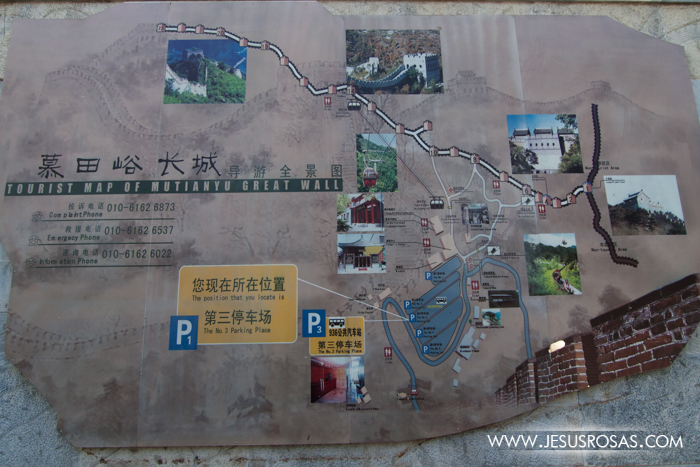 The Mutianyu section is also a great place to go. And for those who can’t walk much, this place has a cable car and even a toboggan to slide down. This is the map.

The toboggan is probably an attraction itself. You don’t need the Great Wall to build one. But of course, the Great Wall makes it cooler. These are the slides. They are very easy to operate and you decide how fast you want to go down. The toboggan takes you from the Great Wall at the top of a hill down to the bottom at the entrance.