People of the Middle East: Egypt

September 28, 2013 Jesús Rosas One comment
10
SHARES
Share on FacebookTweet thisSubscribe
At the beginning of this year, Dr. Donna Lee Bowen, one of my former professors at  BYU, asked me if I could send her some pictures to include in the new version of a book she is editing along Evelyn Early and Becky Schulthies called Everyday Life in the Muslim Middle East. She asked for pictures of people from the Middle East in everyday life so I looked through the photos I had taken on my first trip to the Middle East in 2009 and sent her some. Although I have been in other countries in the region, at the moment I could only send some I had taken in a ten day trip in Egypt. These images were taken before the Revolution.
Click on any picture to enlarge. 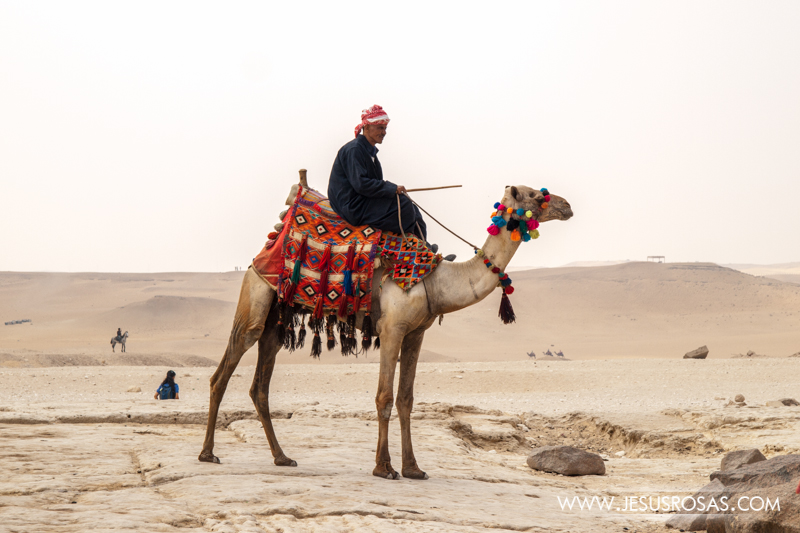 It is common to see several men offering camel rides to tourists around the Giza Pyramid. This man is one of them; notice his outfit. He is wearing a galabiya, a traditional Egyptian robe. 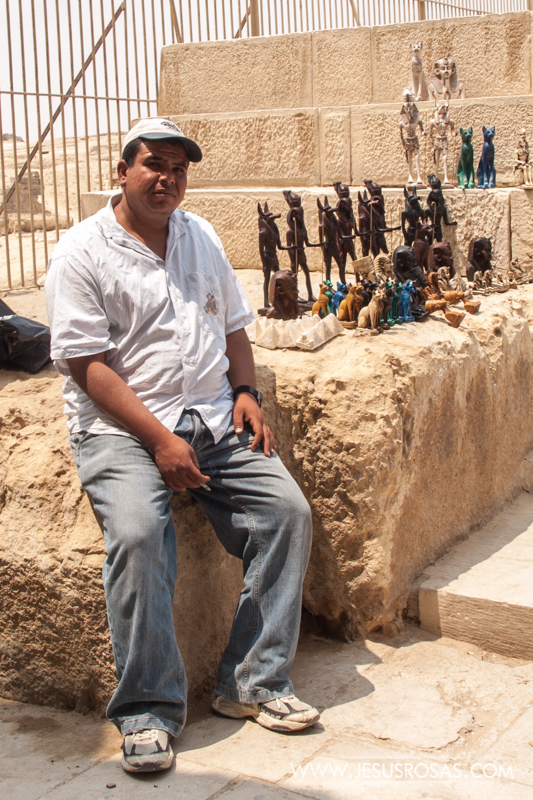 Besides camel rides, the Great Pyramid of Giza is a place where you can find many street vendors. In this photo you can see a man selling art crafts. Notice his Western outfit: cap, jeans, sport shoes, and a wrist watch. These Western influences are commonly found in Egypt. Giza, Egypt. 2009. 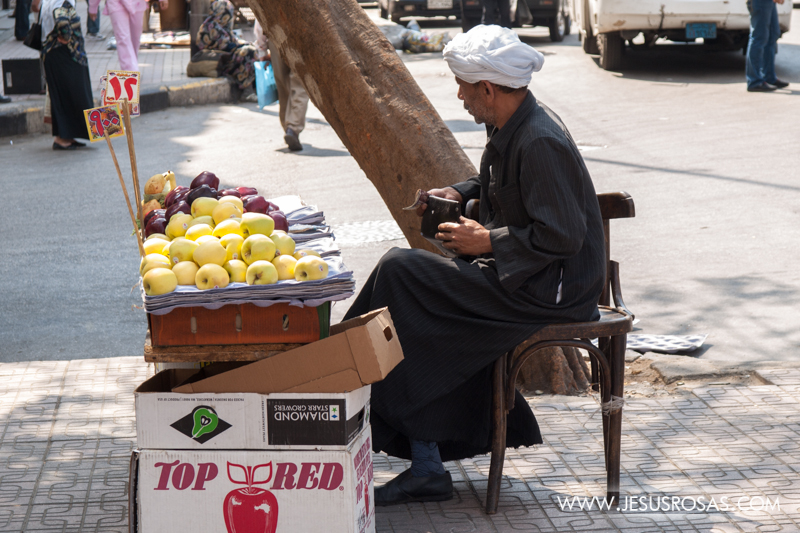 It is also common to find in the streets of Cairo many vendors. In this picture you can see a street vendor selling apples. He is wearing a galabiya, the traditional Egyptian robe and a turban. Cairo, Egypt. 2009. 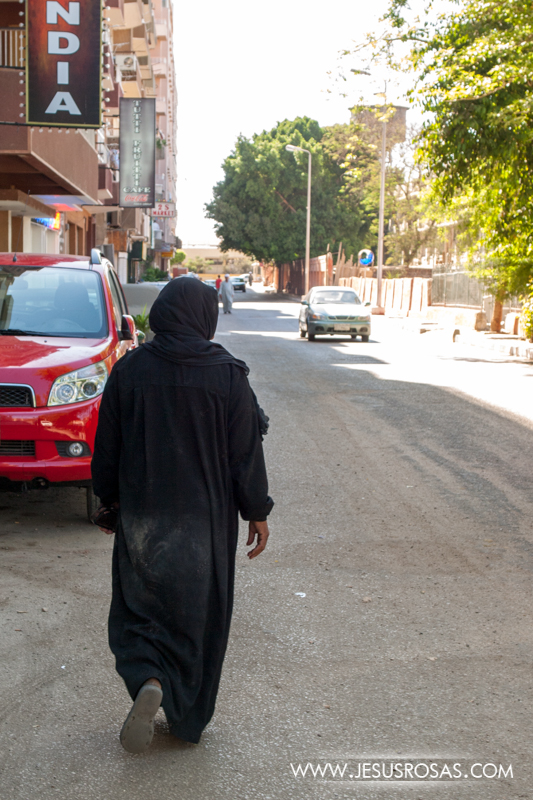 A woman wearing an abaya, which is a type of loose cloak that covers all body. Luxor, Egypt. 2009. 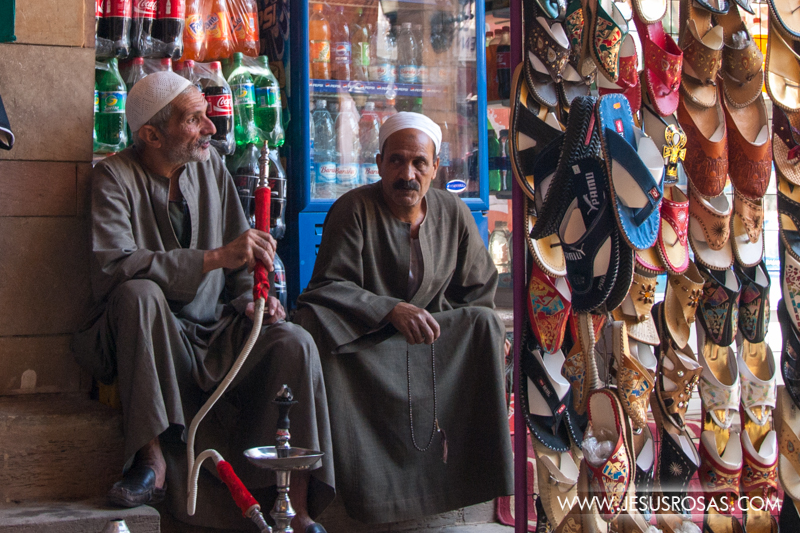 In this picture two men wearing their galabiya (traditional Egyptian cloak) and a white taqiyah (rounded cap). The man at the right holds the hose of an arghila (also known as hookah or shisha). The arghila is a popular smoking artifact in the Middle East. On the right side, traditional sandals. In the background, as in all the world, Coke-Cola. Luxor, Egypt 2009. 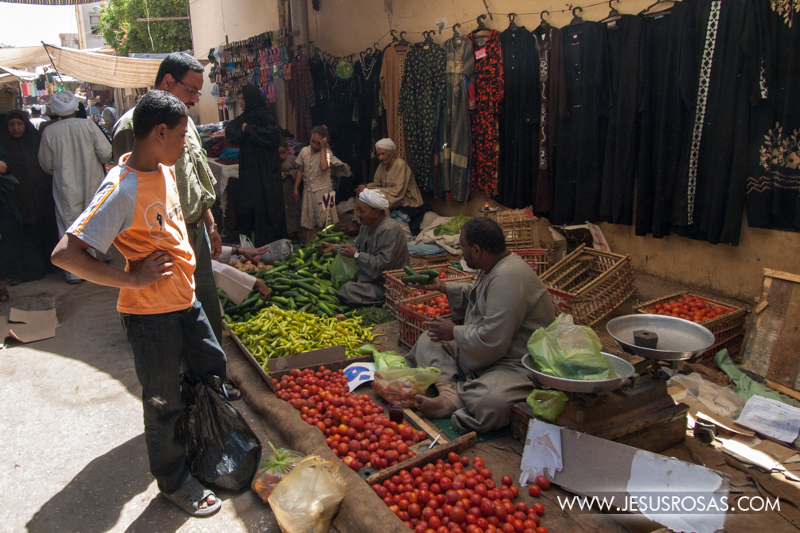 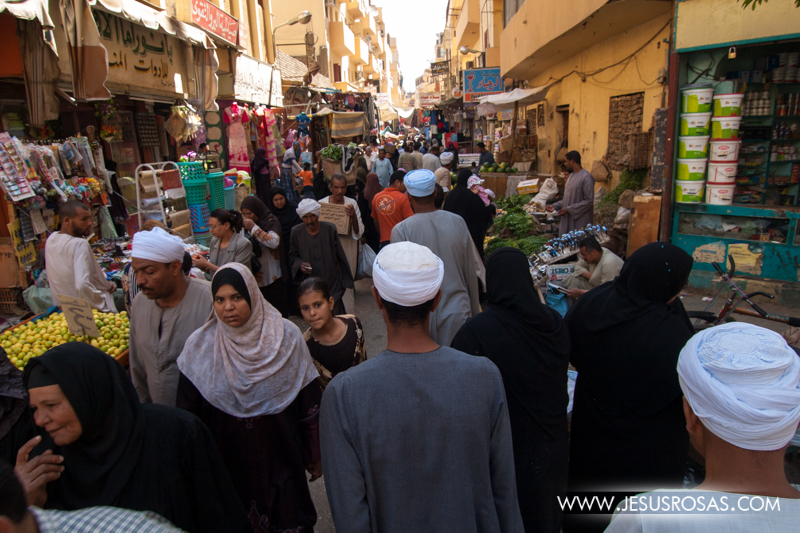 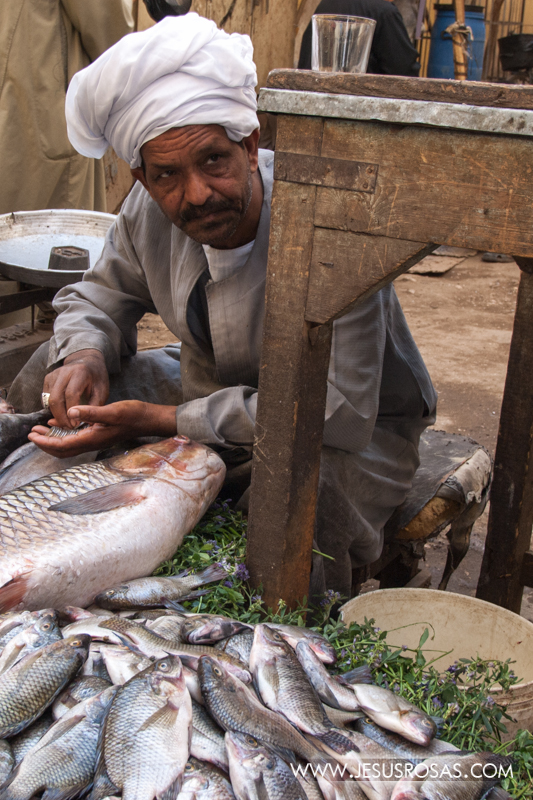 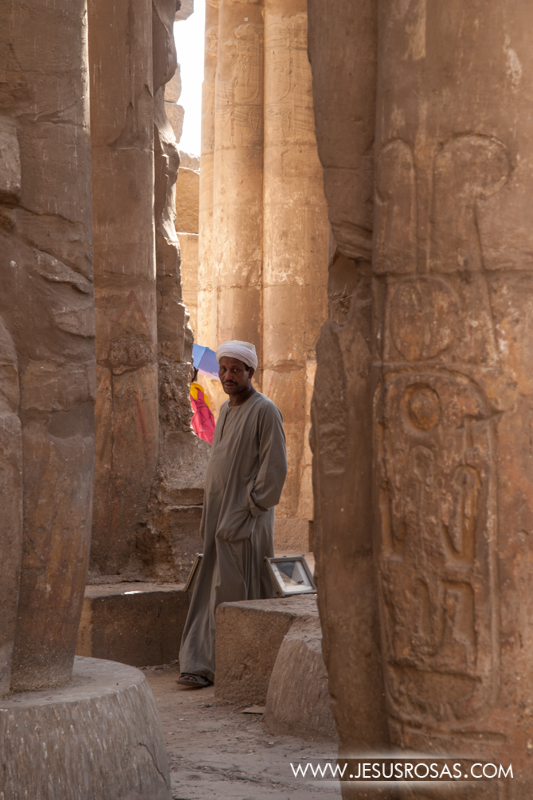 A man peep out between some pillars at the ancient Luxor Temple. Some of these men around the Luxor temple are unemployed men looking for tips from tourists, especially when they are photographed 🙂 Luxor, Egypt. 2009. 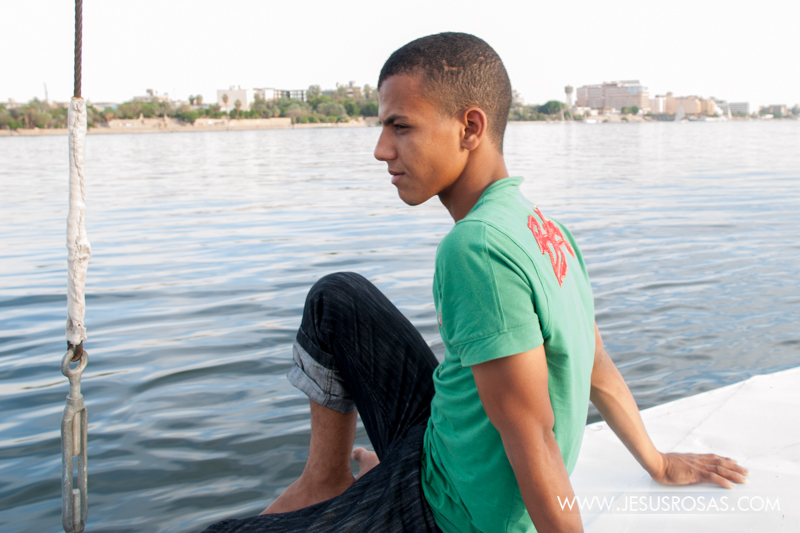 A young man in charge of a boat in the Nile River. His outfit is an example of an increasing Western trend among the younger generation. Luxor, Egypt. 2009. 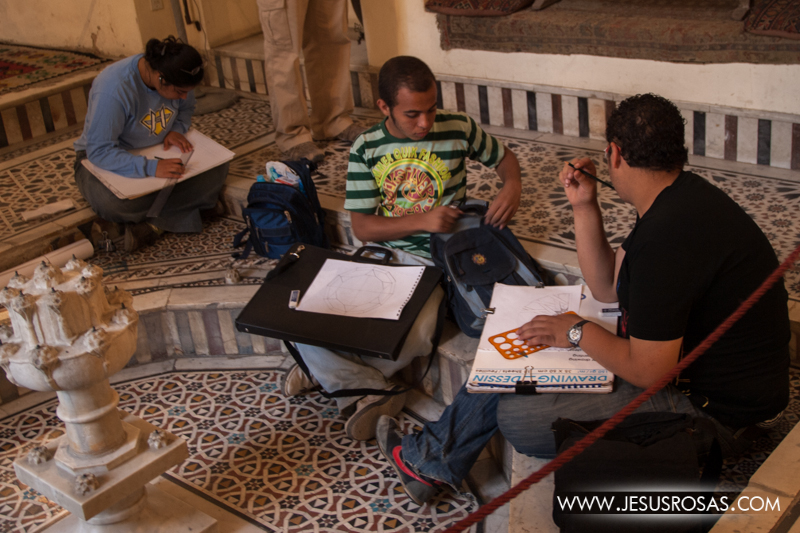 University students at the Gayer-Anderson Museum (a well preserved home from the 17th century). Western clothes are common among the younger and middle class. Cairo, Egypt. 2009. 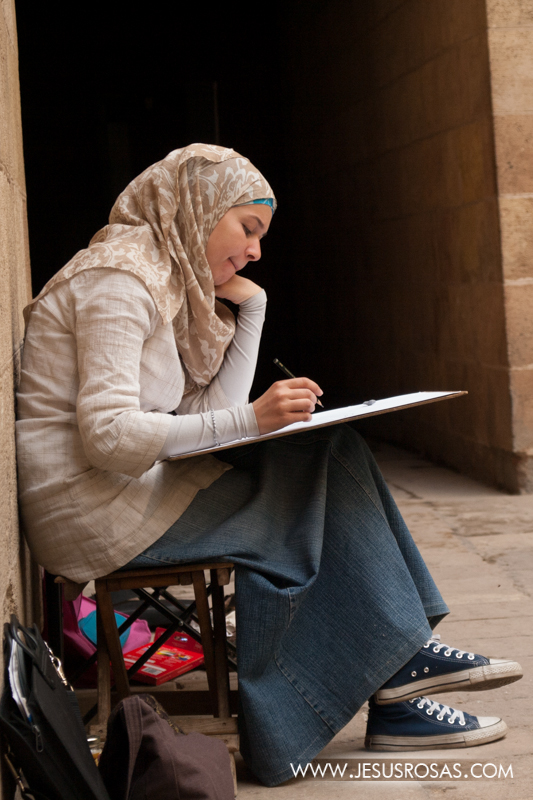 Another young college student drawing at the Gayer-Anderson museum. She is wearing the hijab, a women’s veil that covers the head. The hijab is commonly used by Muslim women. Cairo, Egypt. 2009. 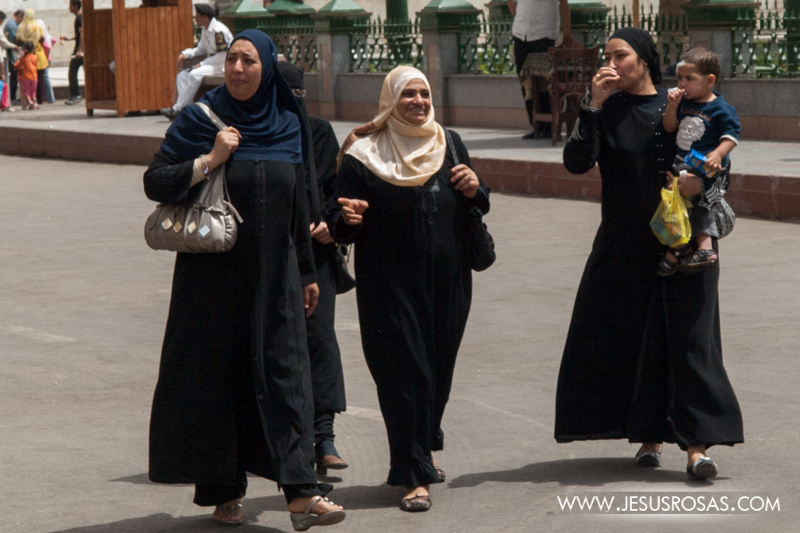 Muslim women crossing a street. Each is wearing a hijab on the head and an abaya (robe-like dress). Cairo, Egypt. 2009. 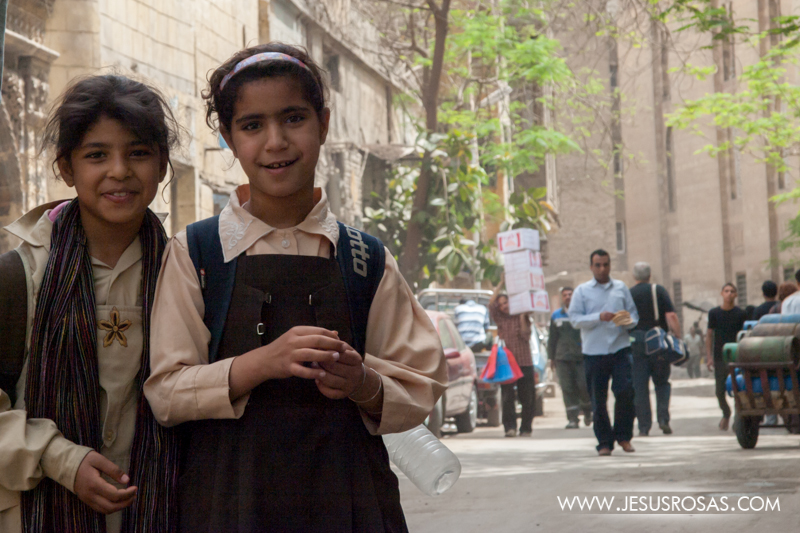 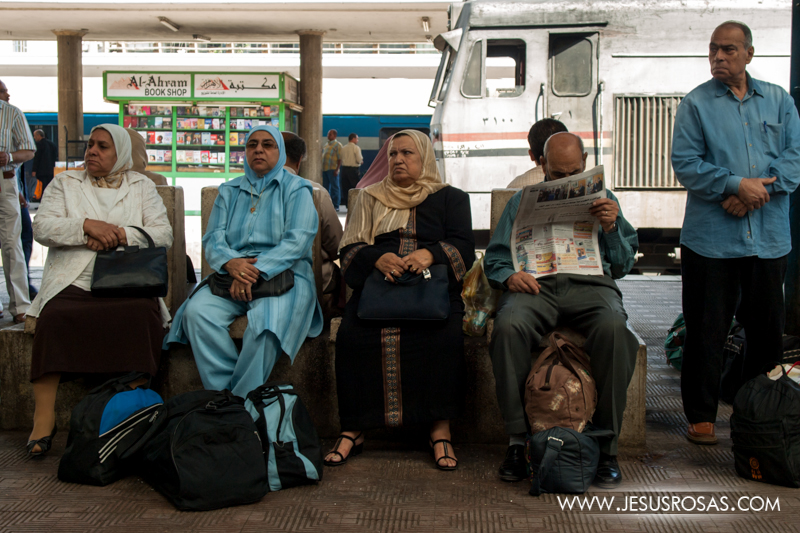 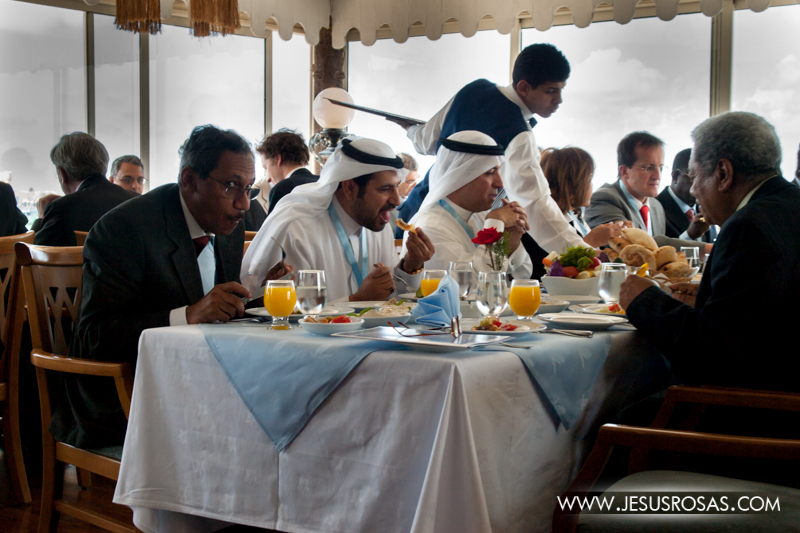 Saudis (from Saudi Arabia) in Alexandria at a restaurant eating with some Westerners and possibly some locals. Saudis and some other Arabs in the Arabian Peninsula are characterized by their white kufiya (a headdress worn by men) tied with an agal (black cord to keep the kufiya on the wearer’s head) and a white cloak, similar to the galabiya (see above), but called thawb. Alexandria, Egypt. 2009. 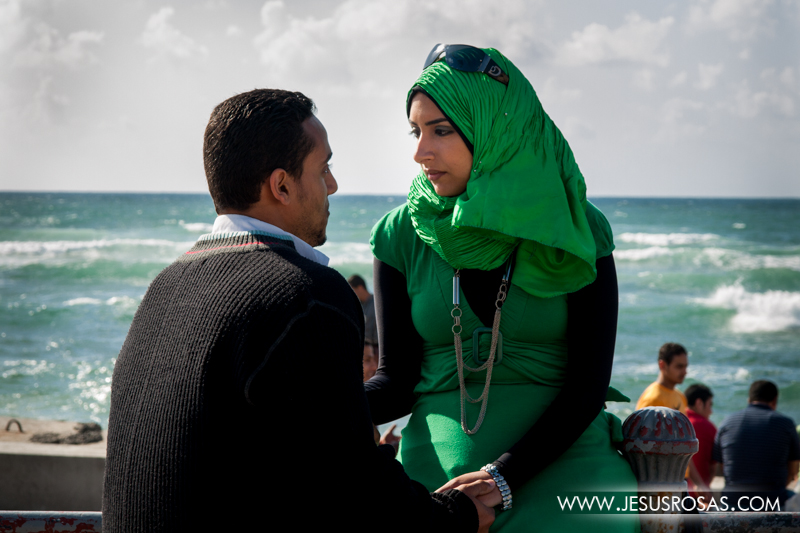 One of my favorite pictures. This couple was so immersed in each other’s gaze that they didn’t notice that I was there and even took a picture of them. The woman is wearing the hijab to cover her hair. In the background the Mediterranean Sea. Alexandria, Egypt. 2009. 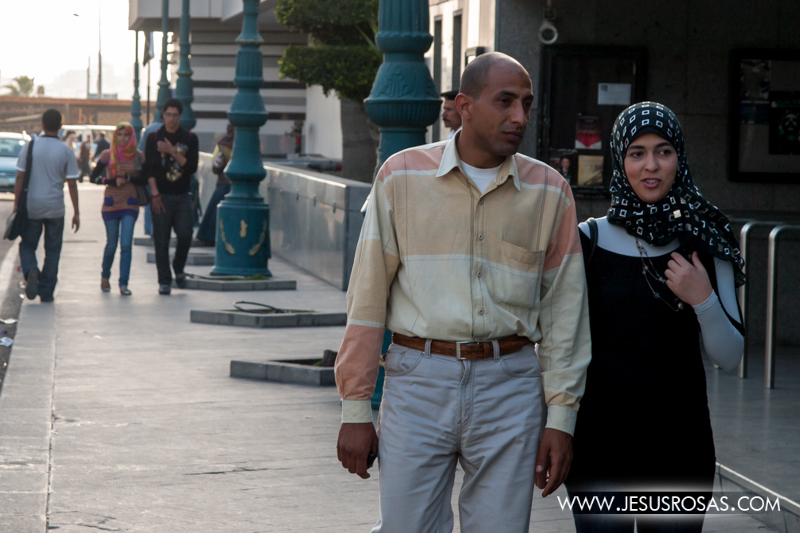 Another couple walking in the streets of Alexandria. The woman also wearing her hijab to cover her hair. Alexandria, Egypt. 2009. 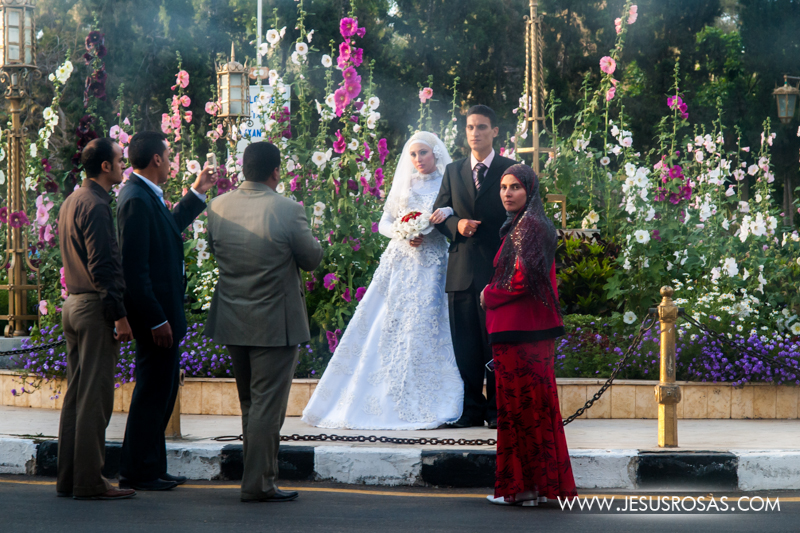 A couple recently married during a photo session with friends and relatives at the gardens of Montaza Palace. Alexandria, Egypt. 2009. 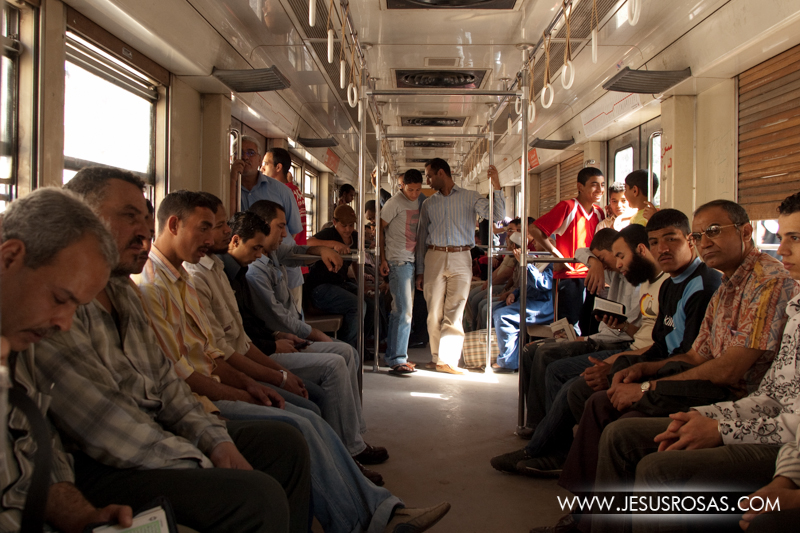 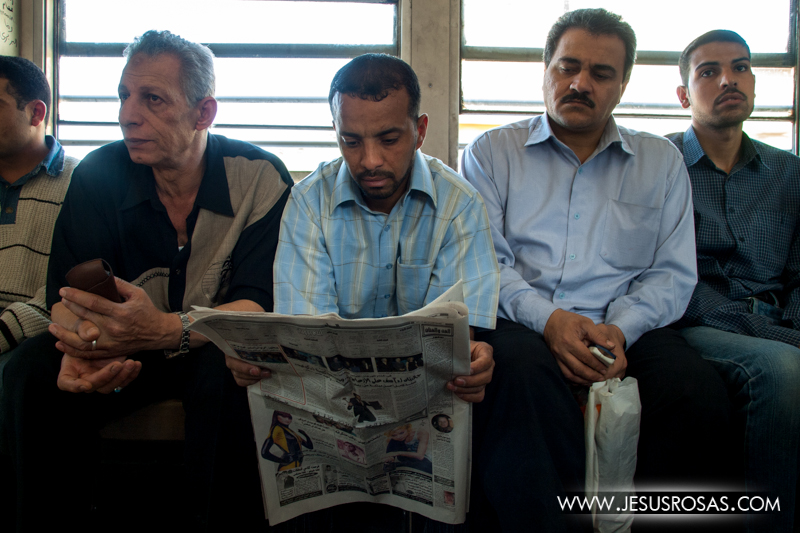 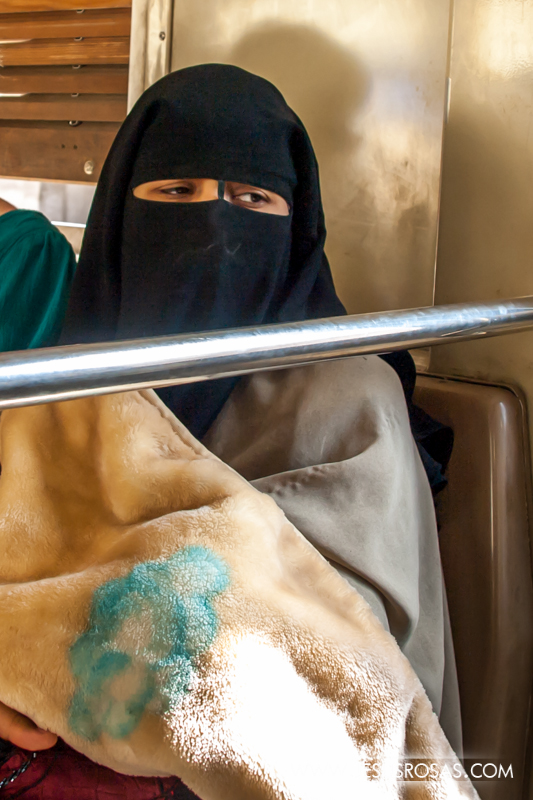 A woman from the most conservative tendency wearing the niqab. The niqab is a veil that covers the face. Cairo, Egypt. 2009. 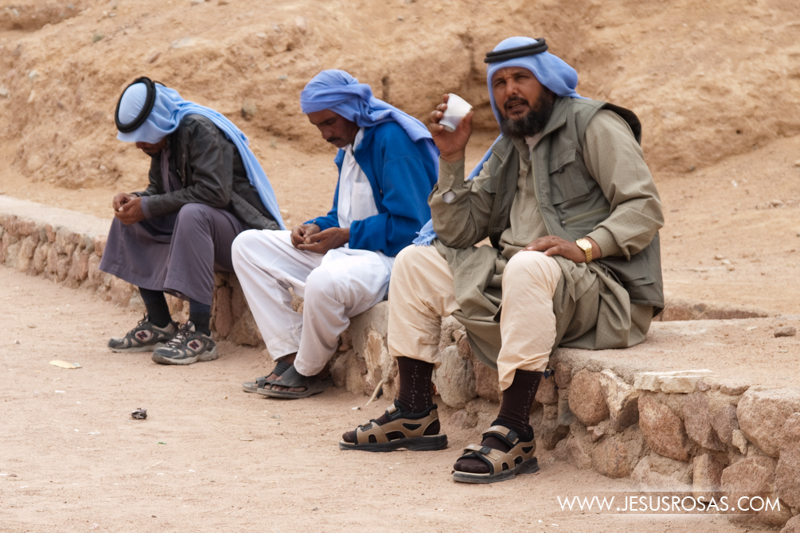 A group of Bedouins near the Saint Catherine Monastery at Mount Sinai. The Bedouins are Arabs traditionally nomadic. Gradually some of them begin to adopt Western customs such as wearing sport shoes and wrist watches. Sinai Peninsula, Egypt. 2009. 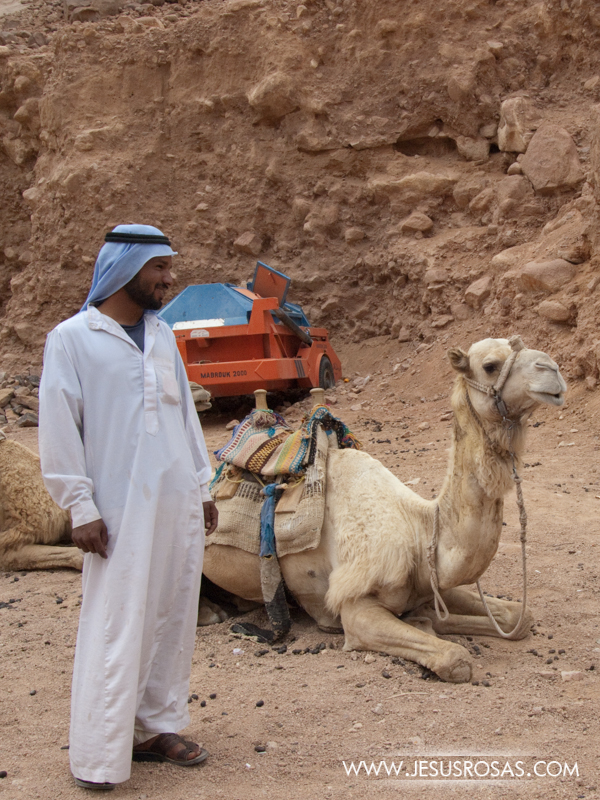 A Bedouin near the Saint Catherine Monastery at Mount Sinai. The Bedouins are Arabs traditionally nomadic. This Bedouin offers camel rides to tourists. Sinai Peninsula, Egypt. 2009. 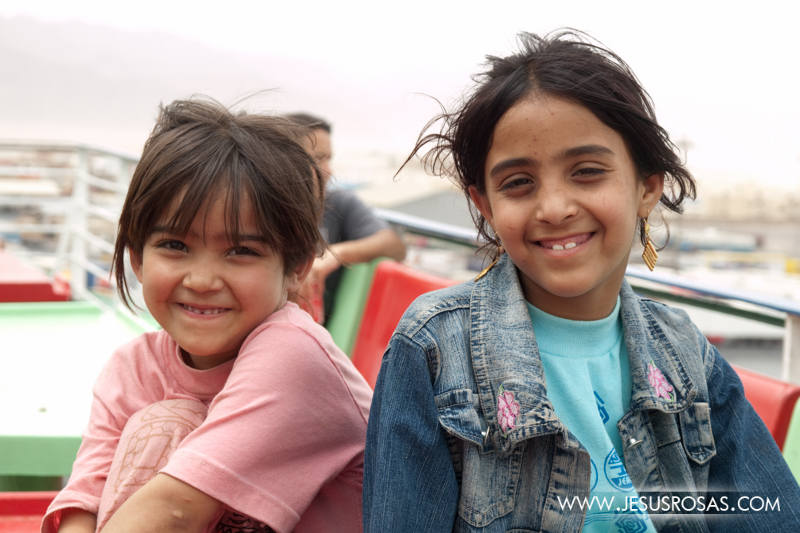 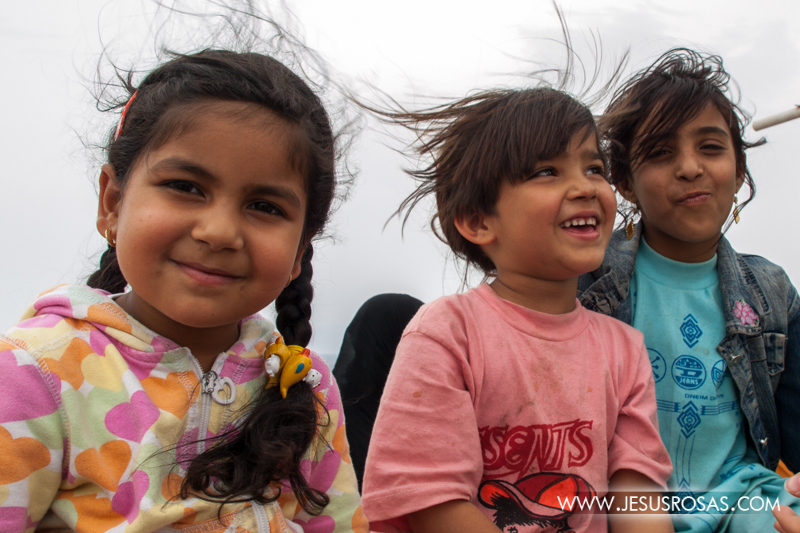 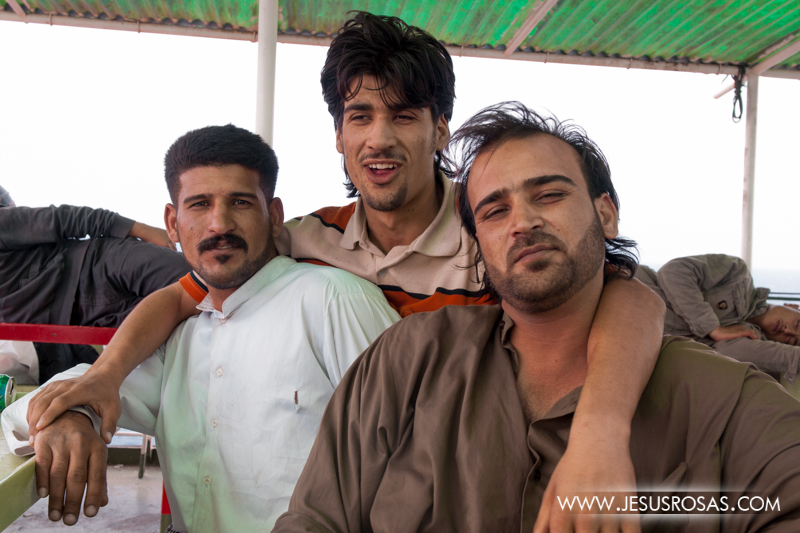 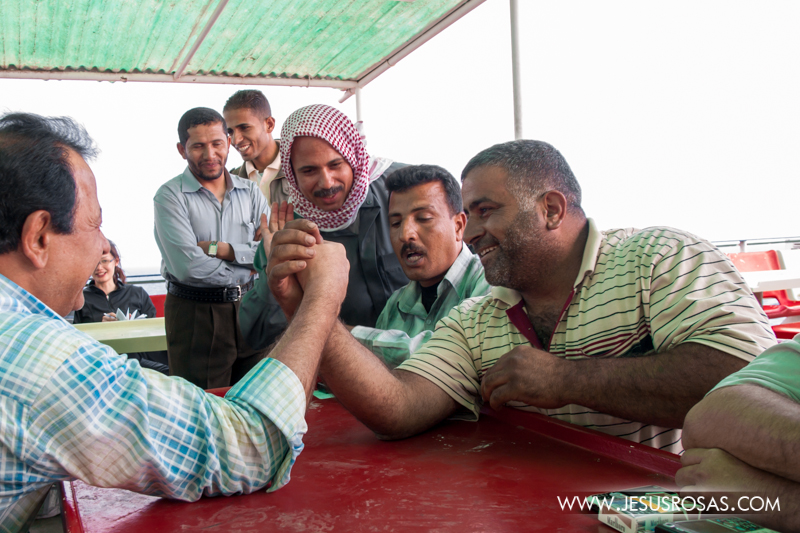 Arab passengers playing arm wrestling during a trip crossing the Red Sea on a ferry from Nuweiba, Egypt to Aqaba, Jordan. Nuweiba, Egypt. 2009.