A Day in Yangshuo After the Rain

The town of Yangshuo, in the southern province of Guangxi, China, is a popular destination for many tourists because of the natural landscapes formed by karsts, mountains, and the Li River.

I decided to take a look at it in my week off during the last Spring Festival (February 2013). Yangshuo has been adapted to please Chinese and foreign tourists alike with a number of shops, cafes, bars, restaurants and outdoor activities such as bike riding routes, boat tours, rock climbing, in other words, it is not the typical Chinese town, but a touristy place. I arrived on a rainy day. I had thought that it would be a good opportunity to see the town empty, but I could say that about a couple of thousands of people also had had the same thought. Street vendors and merchants stayed outside under the light rain. Here is a glimpse of the town in pictures during a busy time after the rain. Click on each picture to enlarge. 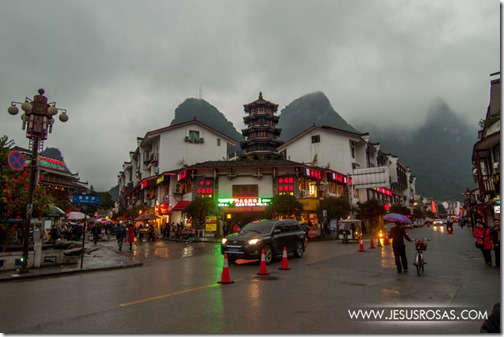 In this picture above you can see one of the main streets in Yangshuo. 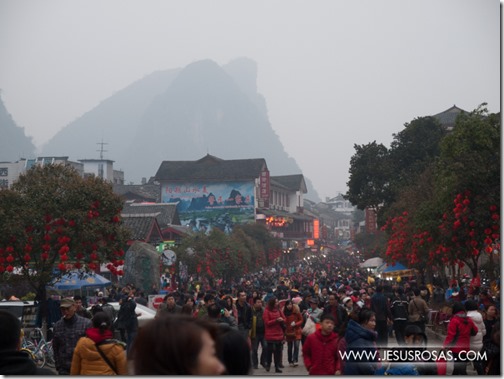 This picture above shows how busy it was. 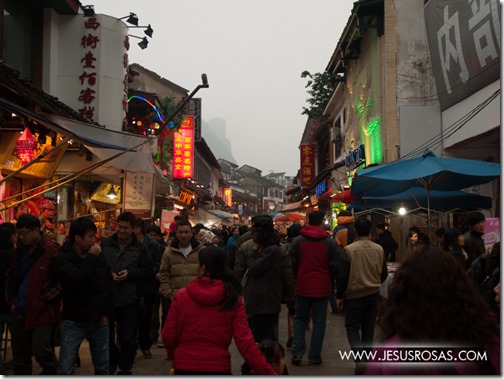 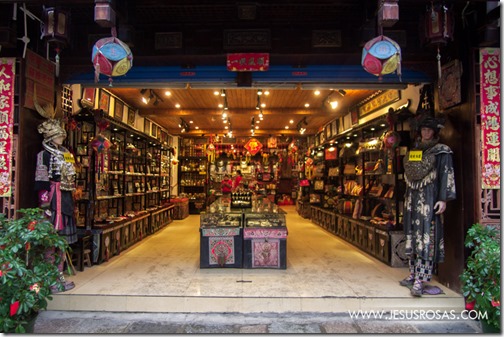 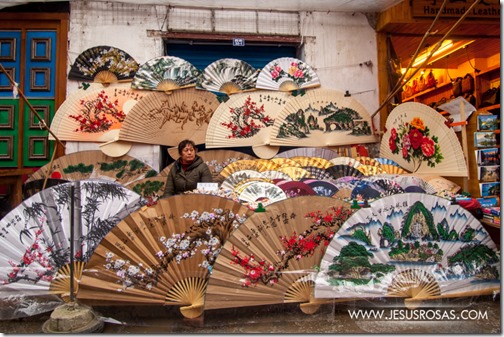 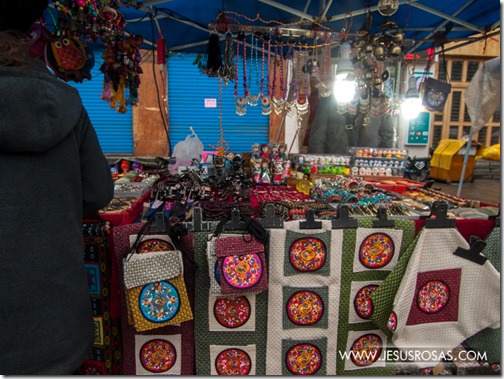 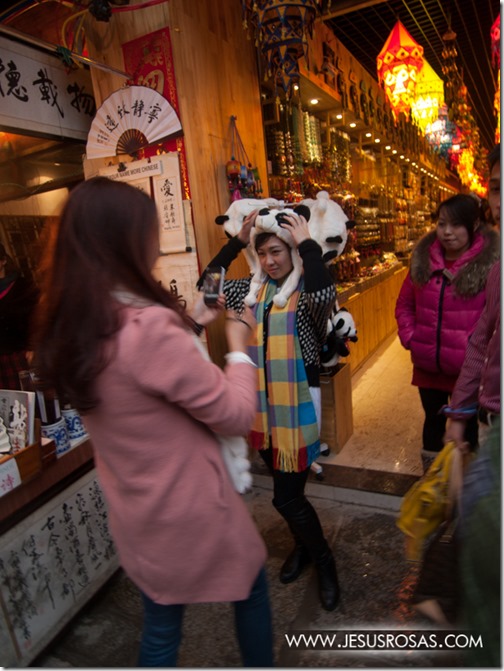 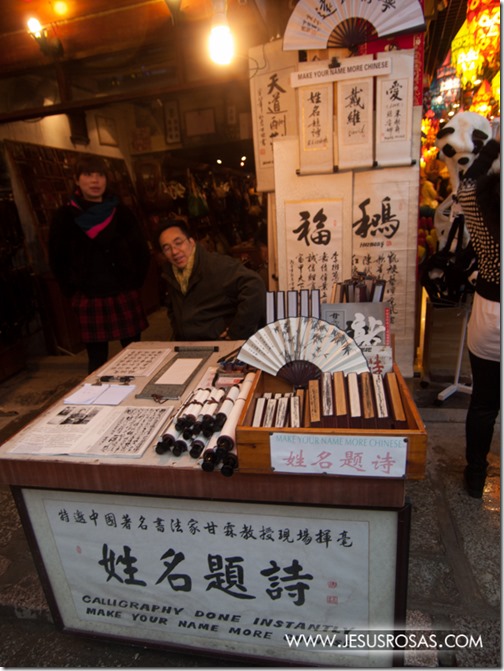 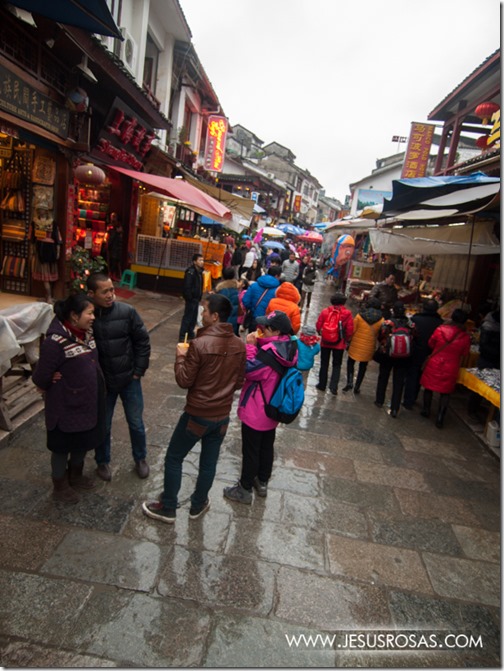 Yangshuo also has several small restaurants and cafes. You can find Chinese and Western food. 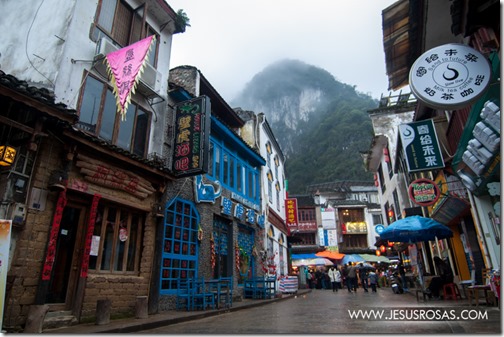 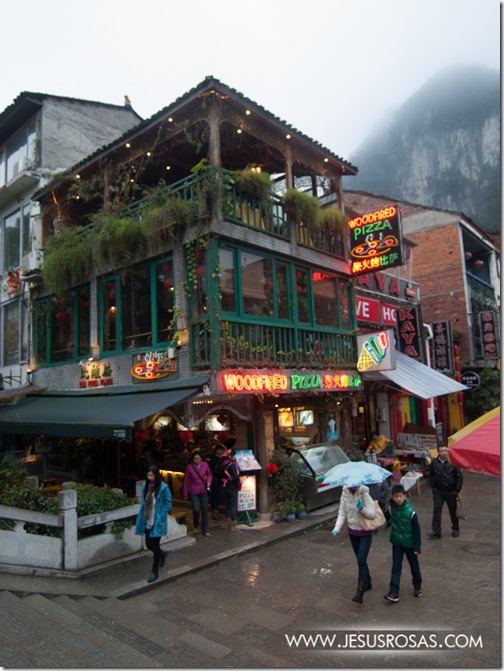 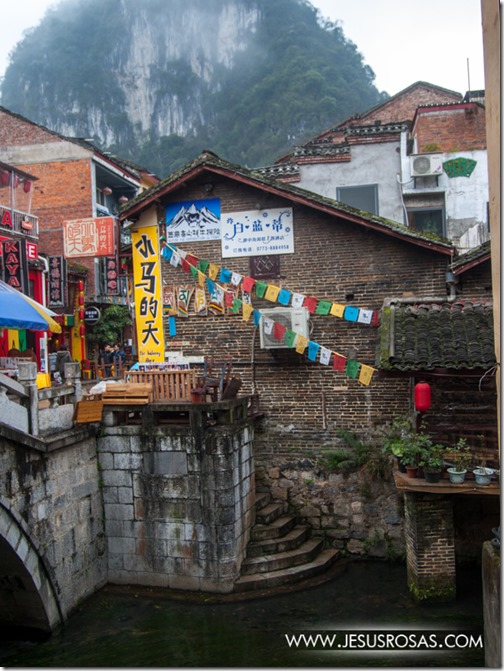 Yangshuo is not just about shopping and eating. There are several things to do in this town. Some options are boat tours, bike riding through the countryside, rock climbing, hiking, caves tours, and more. 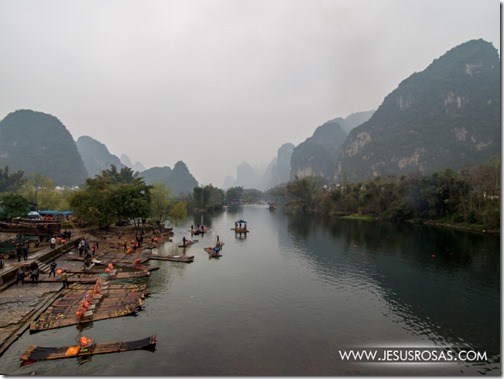 One of the most popular things to do in Yangshuo is taking a boat ride through the river and have view to unique landscapes. 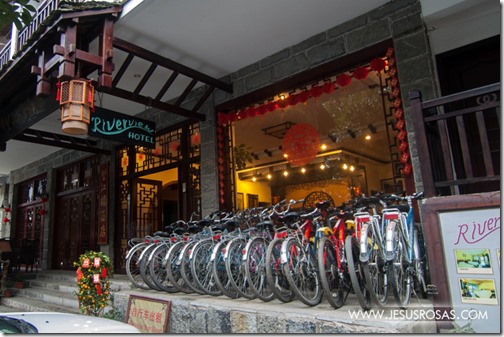 In this pictures above you can see one of the several places you can rent a bike for a day so you can wander around through some of the popular bike routes around. 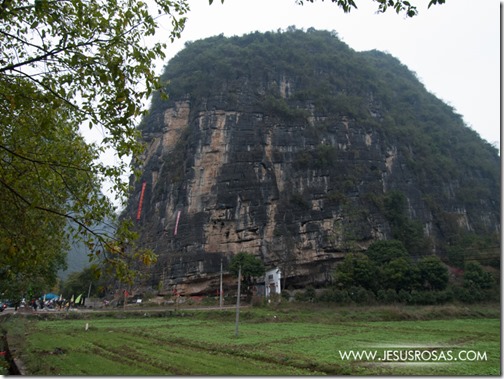 Rock climbing is another popular activity. 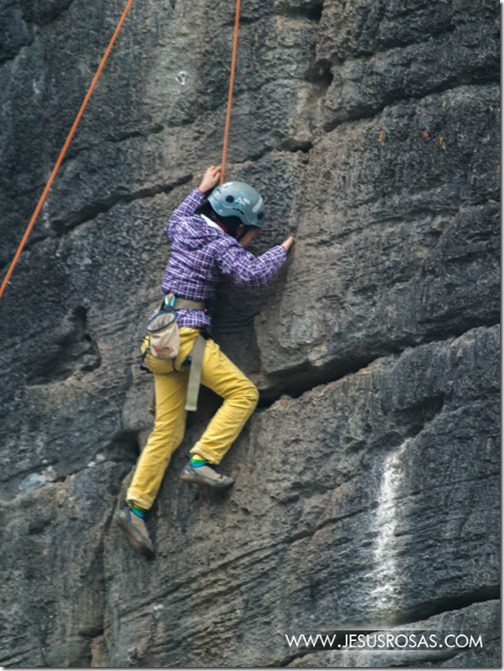 Rock climbing is accessible to all levels of expertise including novice and children as you can see on the picture above. 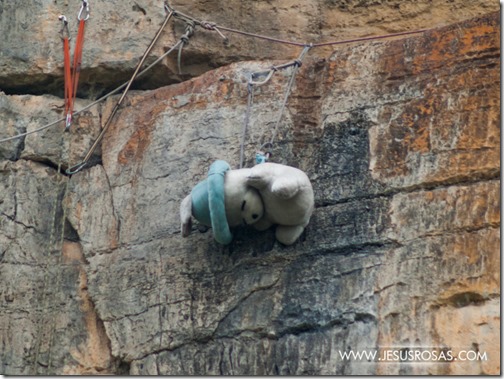 I noticed several objects hanging around the climbing area such as this teddy bear. I assume they were prizes.

The next morning I woke up early and walked around town. The streets were wet because of the rain, and the air was fresh. All the voices, honks, yelling and shouts, engine sounds and crowded streets of the previous day had vanished. It was all in calm and I could hear my own steps, birds on the trees, and the clicks of my camera. Few minutes later I saw a couple of ladies swiping the floor, a couple of pedestrians here and there, one or two motorcycles, and some cars. With the passing of the first hours of the morning, some more people and voices gradually joined the activities of another new day in Yangshuo. It was a day after the rain. 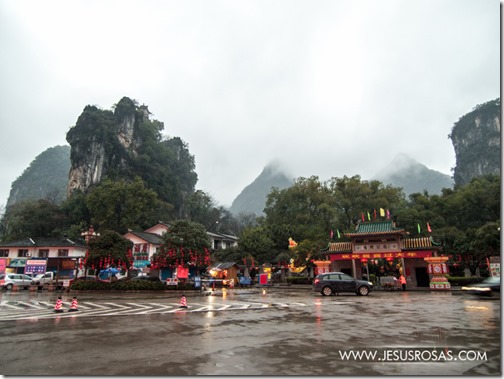 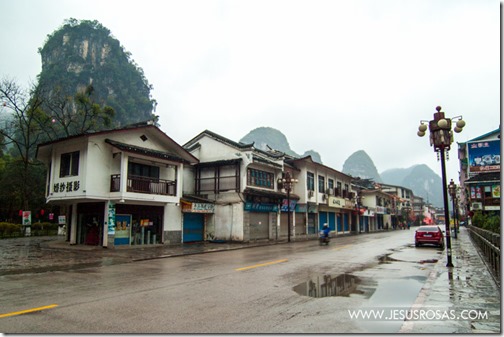 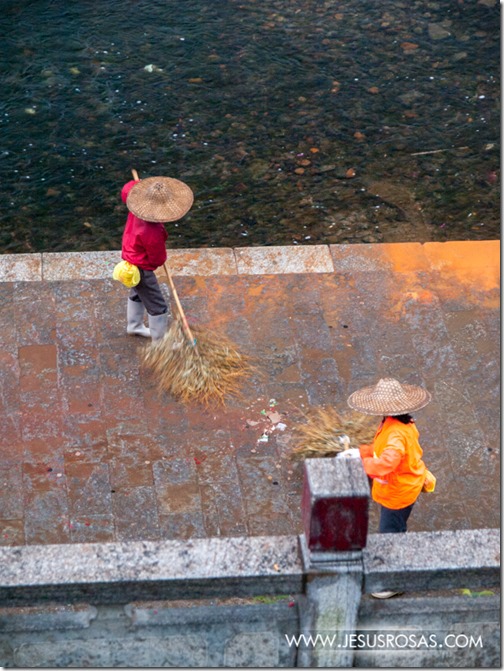 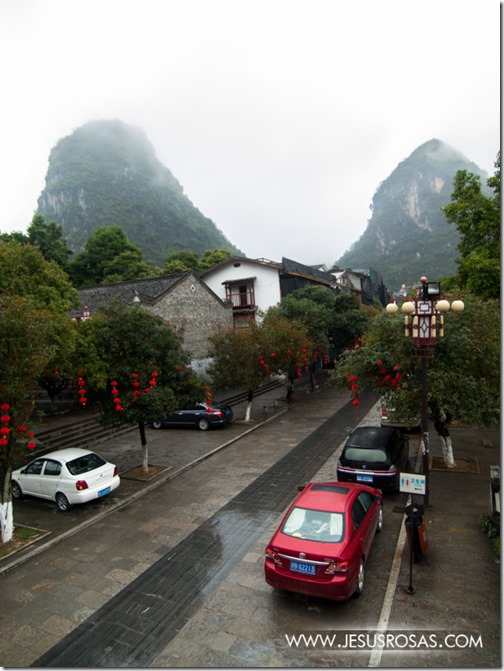 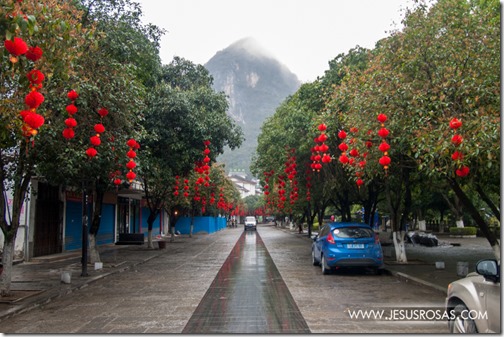 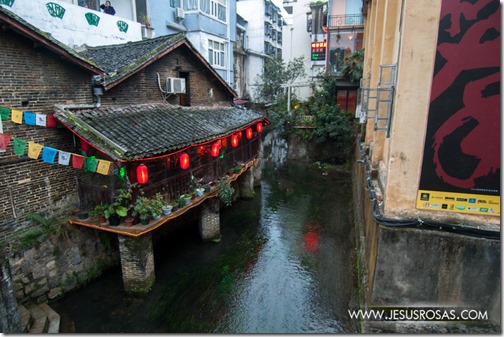 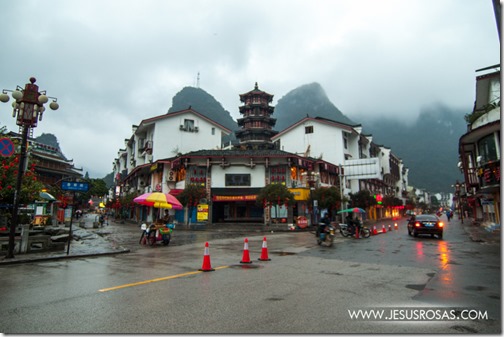 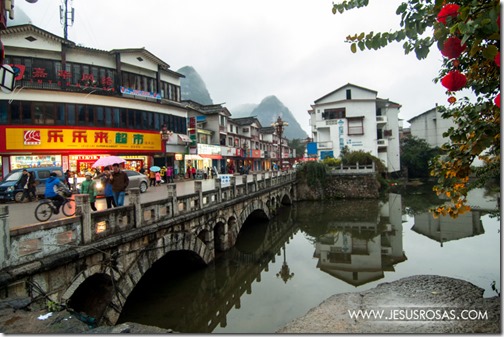 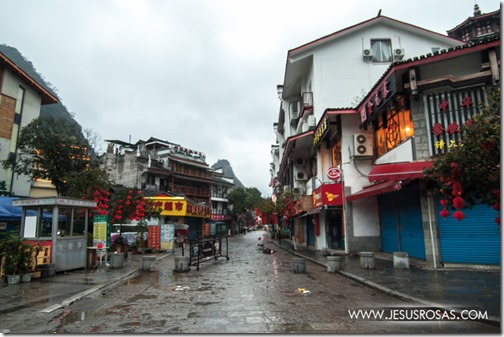 Is there any picture that caught your attention? You can let me know in the comments section below!

Also if you would like to receive an automated notification with new posts of this blog, enter your email address next to the title of this post at the right top. You will receive an email to confirm your subscription. If you don’t receive anything, look in your spam folder. If you liked this post, click on the “Like” button.