China doesn’t stop surprising me. It is hard to describe all what I have seen and lived so far in this place. Today I share with you part of my last trip in the northeast of China. I went to Chengde and then head to this hill with two towers built on top of two unique rock formations. This hill is located in the Shuganta Shan park in a small town called Shuangluan, in the jurisdiction of Chengde, Hebei; it is found about 220 km (136 mi) northeast from Beijing. I’ll explain how to get there in a future post if you are interested. To see any picture enlarged click on it.. 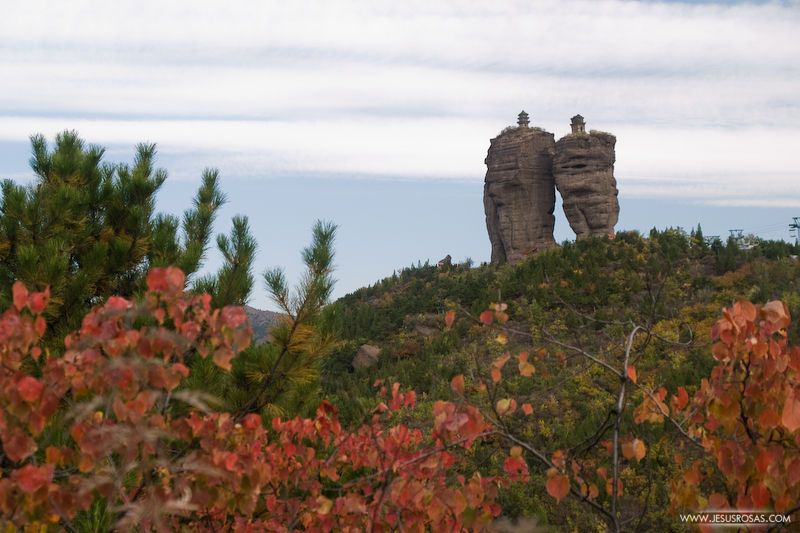 View from the west. 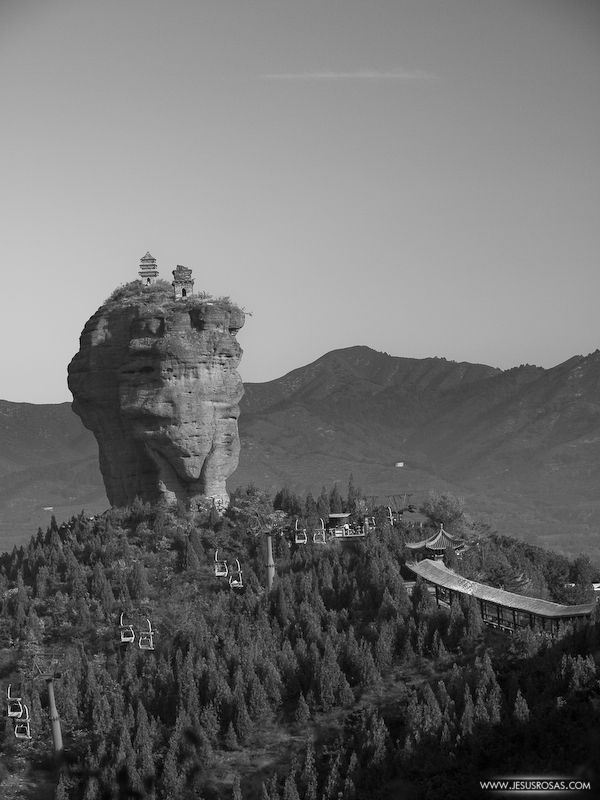 The hill is situated in a touristic area that has a couple of trials to other nearby mountains. This shot was taken from the south side. 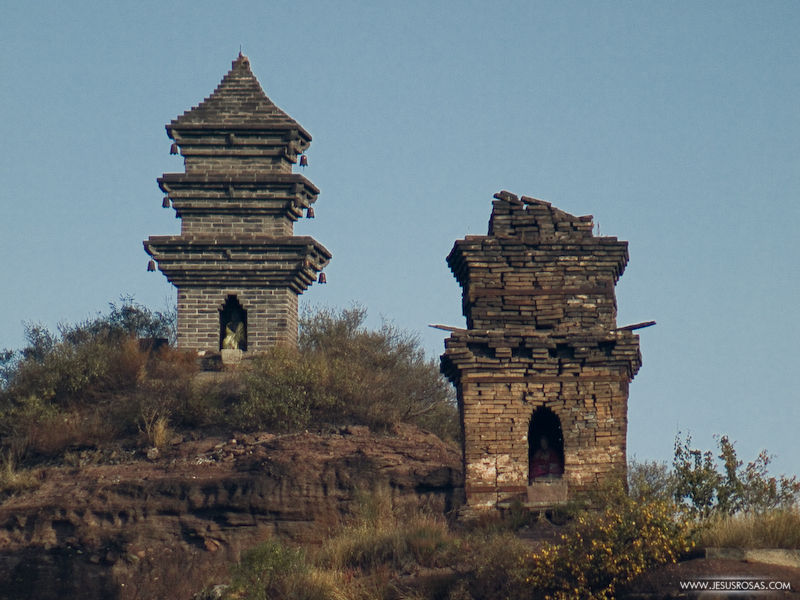 In each peak there is a tower. According to a sign in the entrance, they were built more than 1300 years ago by a group of people known as the Kithan; however, the local government’s official website says that these towers were built during the Liao dynasty*, which would mean they wouldn’t be older than 1105 years. Either way, they are the legacy of a millennial past. They have been renovated. How much of these towers dates from its origins and how much is the product of a recent work, I don’t know. In this picture you can see both towers. The tower at the back (left) is 5.54 m (18.2 ft) high and 1.92 m (6.3 ft) wide and the one on the front (right) is 5.57 m (18.3 ft) high and 2.62 m (8.6 ft) wide*. 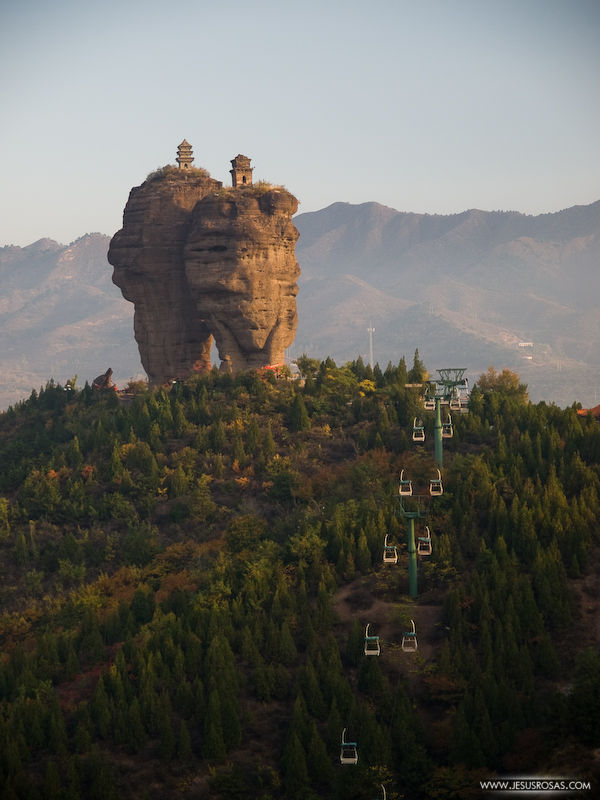 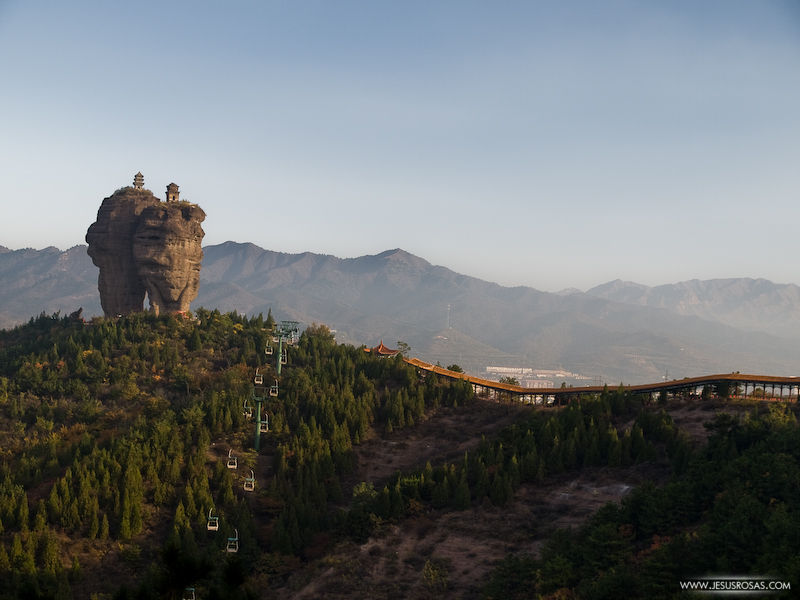 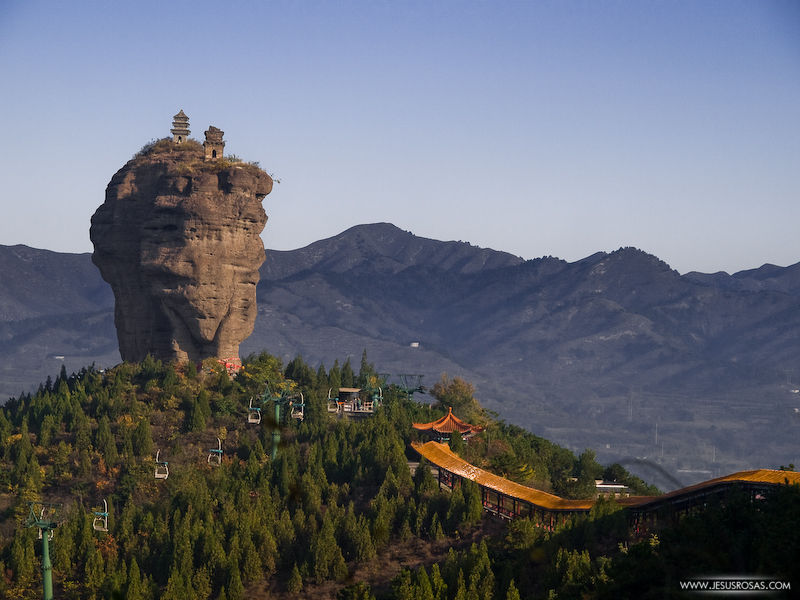 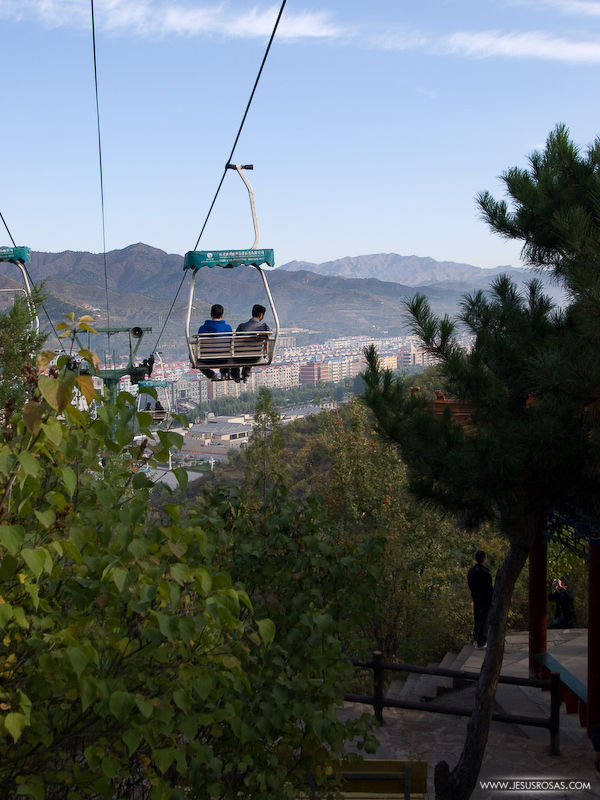 A one-way trip in the car cable costs (September 2012) 30 RMB (62.7 MXN or 4.8 USD+). In my opinion it is not worth it. The way to reach the top of the hill from the entrance is supposedly done in 365 steps (obviously everyone’s steps are different). 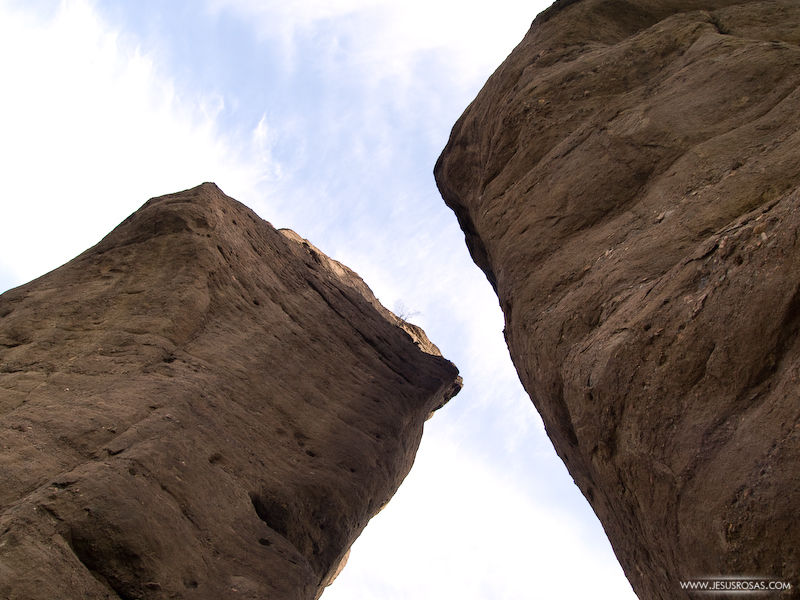 View from the bottom. 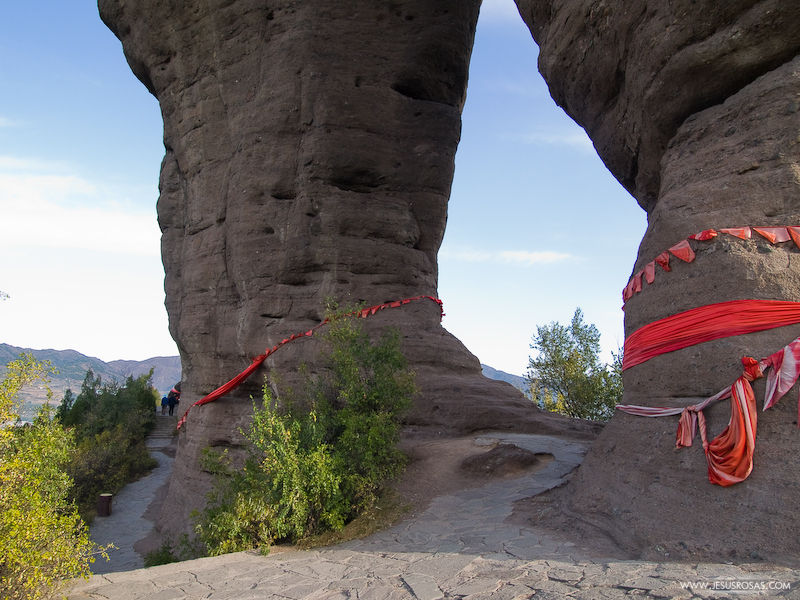 View from the base of both peaks. 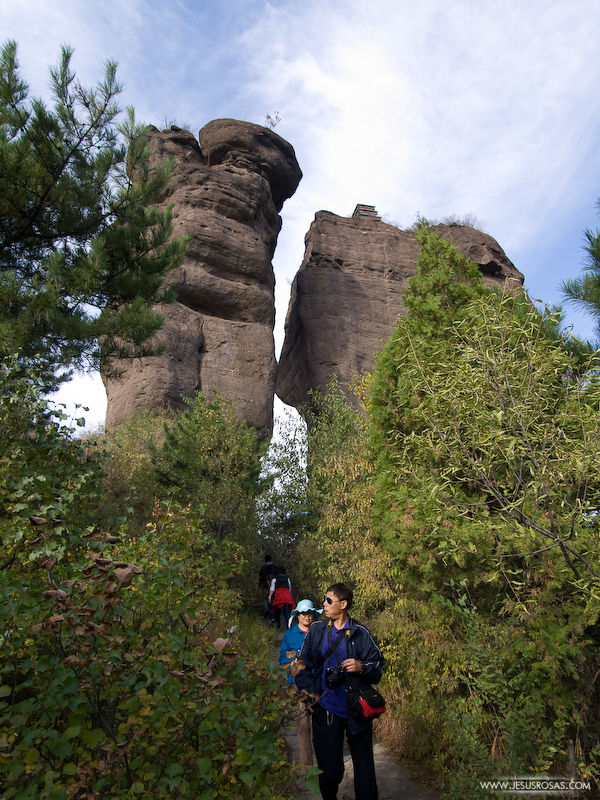 Tourists descending from the base of the peaks. 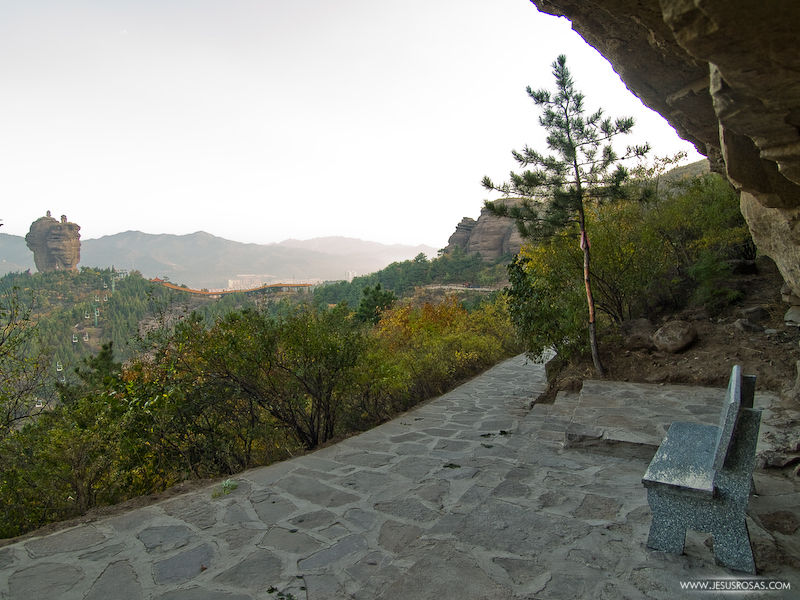 Bench from which you can contemplate the sunrise or sunset light shine on the twin peaks. 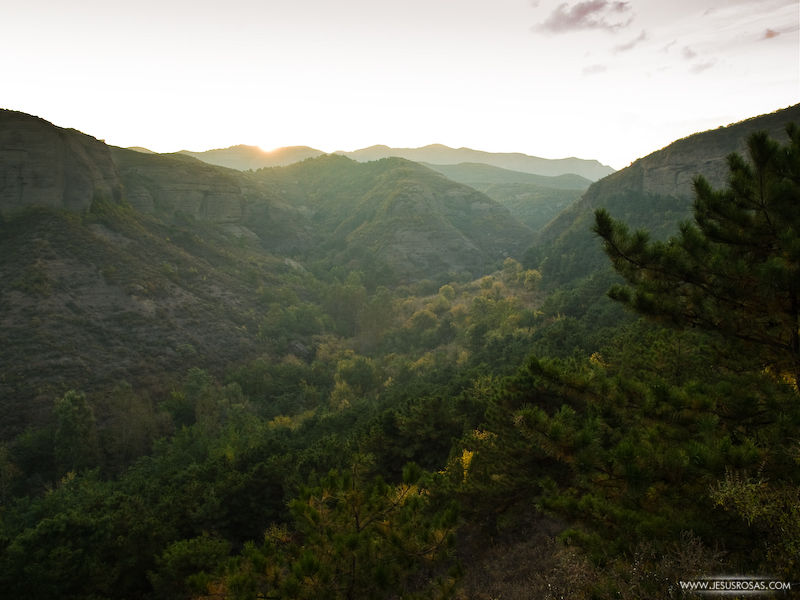 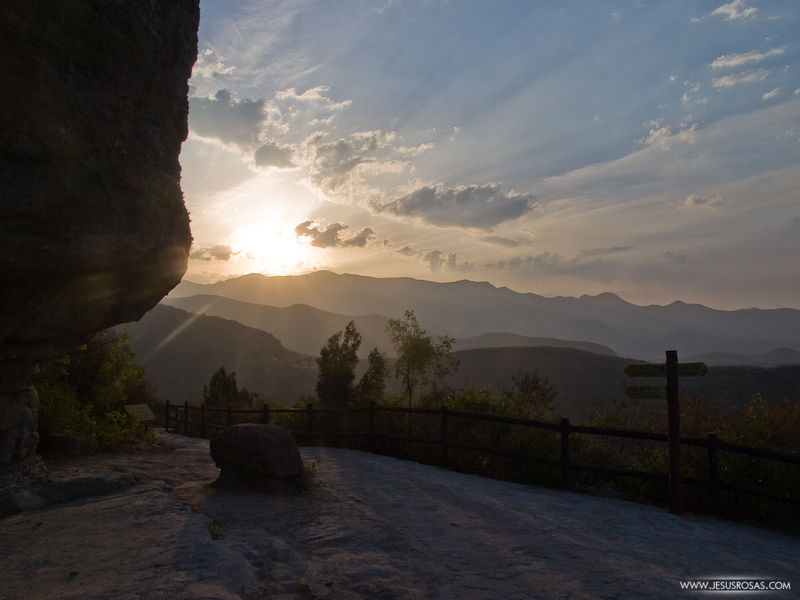 By the way these two pictures show a little bit of what you can see in this park at the earlier hours of the day. 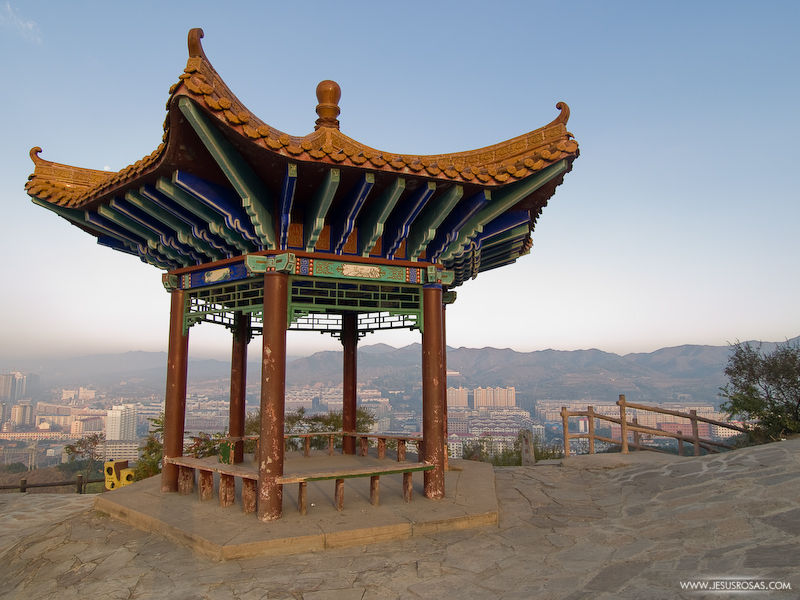 And of course, a pagoda on the top of a nearby viewpoint to contemplate the twin peaks and the city. 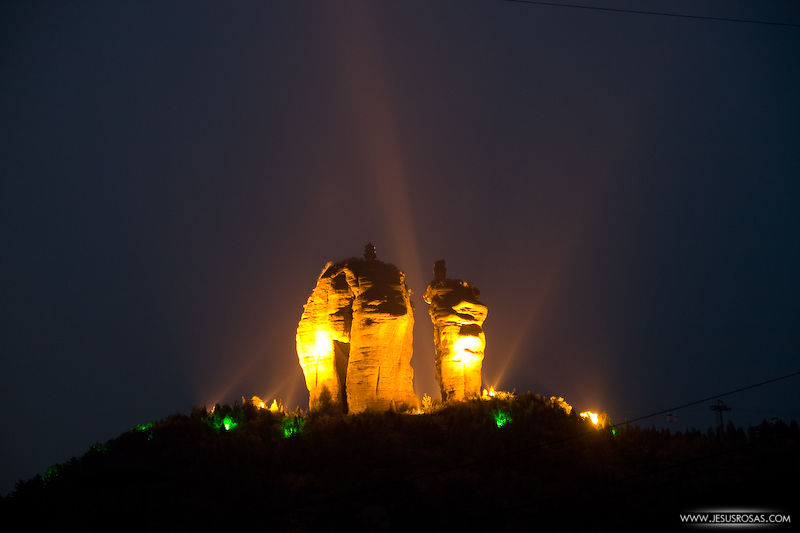 And I conclude this post with this picture I took during the night. I hope you enjoyed this post.